Valentino Larcinese looks at the size of the UK parliament.

Is the parliament too large? Both the Conservative and Libdem manifestoes propose a reduction in the number of MPs. The Libdem, in particular, provide an exact figure: “reduce the number of MPs by 150”. David Cameron has also been quite explicit on this on several occasions: “we’ve got far too many MPs in Westminster. More people sit in the House of Commons than in any other comparable elected chamber in the world.”

So, is the British parliament too large? While it’s probably impossible to give an answer in absolute terms, a comparison with other countries can help. The figure below shows the number of people represented on average by each MP (population per member of the lower chamber) in a number of comparable countries. The figure shows that smaller counties tend to have relatively larger parliaments. The likely reason is that, to ensure sufficient representation in parliament, smaller countries cannot downsize their parliament too much,

therefore ending up with relatively large parliaments. This is clearly the case of Norway, New Zealand, Ireland and, to a certain extent, Sweden. This should make us think twice about reducing the number of MPs:  if you reduce the size of the parliament you take the risk of reducing its representativeness. This is particularly important in an ethnically diverse society like Britain, but is in general important for the representation of minorities of any sort. 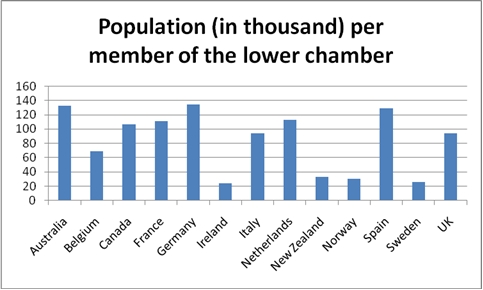 With 94,000 inhabitants per Member of Parliament, the House of Commons is roughly similar to the Italian lower chamber and slightly larger than its Canadian and French correspondents. The ratio of inhabitants to Members, however, is not only substantially inferior to that of Germany but also to that of countries that are much smaller than the UK (in population terms) like Australia, the Netherlands and Spain. This suggests that, at least in terms of these simple comparisons, the House of Commons is possibly oversized, although not dramatically so, compared to analogous bodies in other countries.