Many important themes in the theory of representative government rely on the legislature and executive including a diversity of people from different parts of the country, different occupations and with different characteristics. Chris Gilson looks at what the new parliament means in terms of diversity, and who’s been discussing it.

Last week’s Guardian had a photo of most of the 232 new MPs in Westminster Hall (more than a third of the Commons are now newcomers). The picture shows a lively and fairly diverse set of happy folks. But can we say something more precisely about how representative the 2010 parliament is of the country at large?

For starters, the BBC has a very good analysis of who the new MPs are. Iain Dale has an interesting breakdown of where the Ministerial team is from (as of last Saturday):

As might be expected with the new government being (at least partially) Conservative, the 2010 parliament is not exactly socially representative either. Ninety per cent of MPs are university graduates, 20 MPs are old Etonians (up from 15 in 2005), and 34 per cent went to private schools in general (compare that to 7 per cent in the general population). Almost a third of MPs went to Oxbridge.

As Pippa Norris recently wrote on our blog, parliament is still massively skewed towards men. Over three quarters (78 per cent) of MPs are male (80 per cent in 2005), and there are only four female Cabinet Members, out of 29 allowed to attend Cabinet. This has already prompted the new equalities Minister, the Liberal Democrat Lynne Featherstone, to say that there were not enough women in parliament. Similarly, Claire French writing at the Left Foot Forward blog makes the claim that the new politics ‘has no place for women’. It probably did not help that there were very few women covered during the election campaign itself. Katharine Viner, writing at the Guardian, makes the point that, in comparison to Europe, we are not doing very well:

This cabinet, diverse? With less than 14% women? Spain manages 53%, Germany 37%. Plural? With not a single minority ethnic MP? A new kind of politics? When two thirds of the top table went to private school – three each to Eton and Westminster – compared with 7% of the population?

Looking at our summary chart, we can see that the UK’s current level of female representation is poor compared to many other countries: 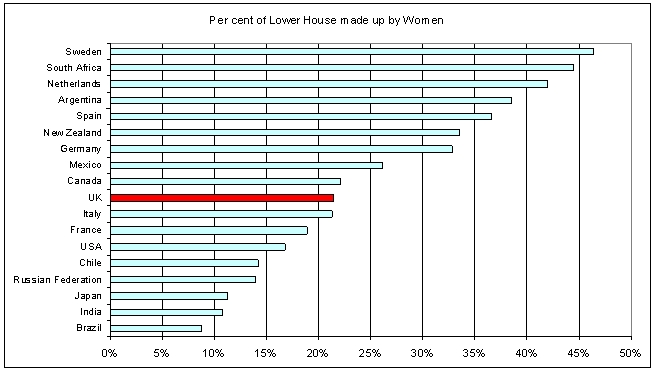 Kira Cochrane at The Guardian discusses on how more women might be attracted to parliament; she looks at a combination of quota (as in Spain), electoral reform, or a change of culture in parliament towards more flexible working rights for women.

Meanwhile, on the other side of the debating Chamber, Labour is in danger of having an all-male leadership contest – which would not look good for the UK’s now solitary ‘progressive’ main party.

Turning to other groups, the number of Muslim MPs in the new parliament has doubled, to eight, with the first female Muslim MPs being elected, as well as the first Muslim Conservative MPs. There is still a way to go, however, as a count of 26 Muslim MPs might better reflect society’s make up, given recent population projections.

The new Parliament has also improved compared with previous years in its representation of black and minority ethnic (BME) groups. However, rates of representation still remain relatively low. Now 27 MPs are from BME backgrounds, up from 14 in the last parliament. If we take the 2001 census as our guide, then there should be at least 52 MPs from a a BME background in total if the Commons was be representative (and likely many more to take into account of population changes). The Guardian reports that 16 of the current BME MPs are Labour, and 11 are Conservative; surprisingly none are from the Liberal Democrats. In the future, if they want to change this and keep any credibility in this area, the Lib Dems will simply have to put more BME candidates forward in seats they know are winnable.