Labour is facing an existential crisis. Its leader, supported by a resurgent membership, is locked into conflict with the majority of his MPs. Neither side will back down in a battle for the party’s heart and soul. Parallels with the 1980s, when Labour was consumed in civil war while Margaret Thatcher waged war against the communities of Labour’s heartlands, are painfully obvious. But the roots of the current crisis go much deeper, writes Martin Wright.

The Labour Party is the child of hope and compromise. Its political DNA was made from two main elements over a century ago. One was the counter-cultural, revolutionary enthusiasm of the late-Victorian socialist movement. Inspired by the writings of visionaries like William Morris and Edward Carpenter, its members yearned for a new life, free from the oppressive influence of industrial capitalism. The other was the pragmatic realism and political muscle of a trade union movement that had realised, by the early twentieth century, that the only way it could protect the rights of its members within the capitalist system was to create its own political party. One parent wished to recast society completely; the other wished merely to adjust it. The marriage was set to be stormy.

Even before the foundation of the Labour Party there were serious strategic disagreements among socialists. Some were prepared to compromise, with a view to winning over the unconvinced. Others were insistent that the values of socialism should not be trimmed. During the 1890s these differences of vision revolved around the mission of the Labour Party’s forerunner, the Independent Labour Party (founded in 1893). There were those, like Robert Blatchford, newspaper editor and figurehead of the influential Clarion movement, whose vision for the new party went beyond the merely political, to embrace a wider educative mission. A labour party, he asserted in 1892, should be more that a ‘mere Labour Electoral Club’:

It is an organisation formed to rouse, to educate, and to unite the vast inert masses of the workers … It will do more than bring out labour candidates. It will constitute itself into a great machine for the spreading of knowledge, for the destruction of falsehoods, for the investigation of all national and local administrative affairs.[i]

To summon up this transformative political force, Blatchford appealed to the socialist movement’s ‘rank and file’. He claimed there were hundreds of thousands of ‘unattached socialists’ ready to implement his vision, and during the late 1890s and early 1900s, Blatchford and his socialist allies ran an energetic campaign for what they called ‘socialist unity’. They held mass meetings across Britain; they filled halls and city squares, and assembled on open moorlands. Socialist speakers such as Victor Grayson, MP for Yorkshire’s Colne Valley, enthused audiences with a millenarian message of hope and renewal. Their movement was a great grandparent of Corbyn’s.

But the movement was looked upon with distrust by the emerging generation of professional labour politicians, who were more concerned with what we now understand as ‘electability’. Chief among them was James Ramsay MacDonald. An immensely charismatic figure, quite capable of articulating his own magnetic socialist vision, it was MacDonald who steered Labour into the political mainstream. He urged that socialists must do more than simply proselytise; they must lead. ‘Hitherto we have scattered the good seed broadcast and have been too easily pleased with the sowing of it’, he wrote in 1894, ‘The time has now come for us … to reap the harvest. We must put the yoke of organisation on our shoulders.’[ii]

To this end, he engineered a series of political compromises, with the Liberal Party and the largely non-socialist trade unions, about which he was quite candid. ‘So soon as the Socialist enters politics’, he wrote in 1908, ‘he discovers the necessity of subordinating dogmatic Socialism to the practical possibilities of Socialistic change.’ He warned socialists against what he saw as the ‘tempting but futile paths of revolution’, by which he meant attempts to turn the Labour Party into an explicitly socialist party, and he urged socialists to abandon their ‘Edens of perfection’. [iii] His political grandchildren sit today in the House of Commons, locked in intractable struggle with their own rank and file.

The fundamental, sometimes vitriolic, dialogue between hope and compromise represented by these two tendencies within British socialism echoed across the twentieth century. MacDonald’s genius was to reconcile them, and it took Labour into government twice in the 1920s. It was a balancing act that couldn’t last, however. Destabilised by economic crisis, his second government ended in wreckage in 1931. Much to the fury of the socialist rank and file, MacDonald made the ultimate compromise of forming a government with his Tory enemies. In the wake of that profound disappointment, Labour faithful embraced the hope represented by a leader with whom Corbyn has more in common than any other of his predecessors: George Lansbury. A magician of mass mobilisation, Lansbury revitalised Labour’s grass roots, only to be removed by the right wing of his party in a disagreement over foreign policy.

The great achievements of the 1945 Labour Government had their roots in the Lansbury era, and undoubtedly created a better Britain. They did not, however, resolve the fundamental tension between hope and compromise that lies at the heart of socialist politics. Harold Wilson and Jim Callaghan wrestled with the same basic problem of squaring vision and reality, with diminishing success, in the 1960s and 1970s, only to see Labour subside into the civil war of the 1980s. The pragmatists emerged victorious from that protracted struggle, under the leadership of their own MacDonaldesque visionary, Tony Blair. And for a while, it seemed, their victory was complete.

It is now clearer than ever, though, that the Labour Party remains trapped in a Promethean drama older than the party itself. There is far more involved than a disagreement over leadership style or electoral appeal. What we are witnessing is a fundamental clash between vision and reality that dates back not to the 1980s, but to the 1890s. Successive generations of socialists have struggled with the same problem, and a resolution is now more urgent than ever. After all, we still have a world to win.

Martin Wright is Lecturer in History at Cardiff University. 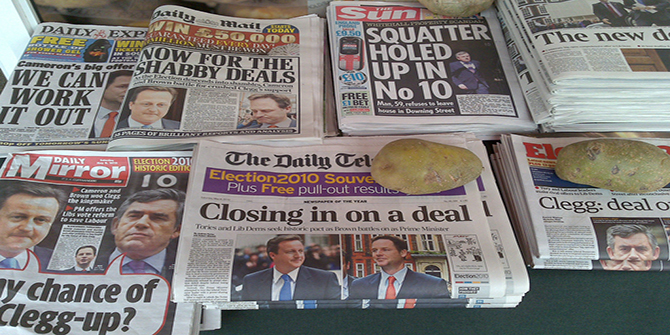