Arianna Giovannini and Amreen Qureshi highlight the gap that exists between levelling up rhetoric and reality, and argue that the government has to show it has the ambition, plans, and political will to shift the dial on regional inequalities and overcentralisation.

In 2019, Boris Johnson was elected on a promise to ‘level up every part of the UK‘. And yet, two years on, the levelling up agenda has failed to deliver the conditions for everyone across the country to live a good life. New IPPR North research has found a growing gap between rhetoric and reality, and has tracked the number of promises and announcements made in direct connection with levelling up, showing that many of these have been watered down or broken (see a summary in Figure 1). For example, the much-vaunted Levelling Up Fund has ended up allocating only £32 per person in the North in 2021. This is hardly enough to undo the damage of austerity: during the past decade, there was a drop in annual council service spending of £413 per person in the North, and £388 across England. 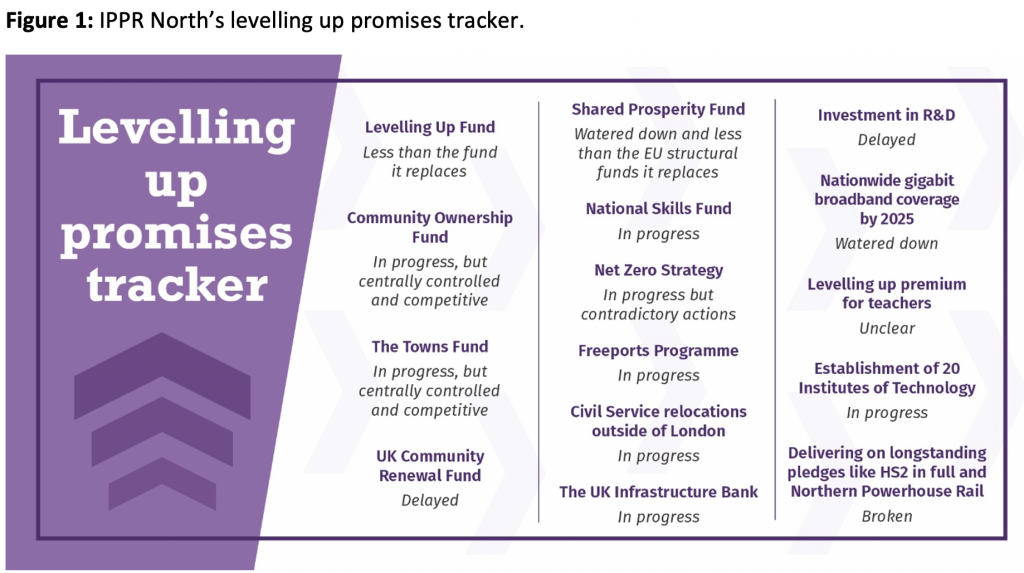 Despite government pledges to rebalance the economy, the UK has seen inequalities widen and worsen. Regional divides directly affect people in their everyday lives, typically leading to lower educational attainment, poorer health outcomes, and inadequate access to good quality jobs. Our report highlights that for every job created in the North, nearly three are created in London and the Greater South East. Additionally, the number of people experiencing in-work poverty in the North has risen from 3.4 million in 2009/2010 to 3.5 million in 2019/2020. This results from a centralised, extractive economic model that locks the North’s economy into lower productivity and low-quality work.

The Prime Minister claimed he doesn’t wish to ‘decapitate the tall poppies’ by concentrating efforts only in the areas that are lagging behind. Yet, our research consistently demonstrates that regional divides are becoming increasingly unsustainable and do not benefit any part of the country – not even London. The so-called North-South divide is an oversimplistic dichotomy that doesn’t capture this. Investment in areas like the North is crucial because it will lead to national prosperity – without levelling down any other part of the country, and opening the way to generative economies and a better quality of life for people across all regions. 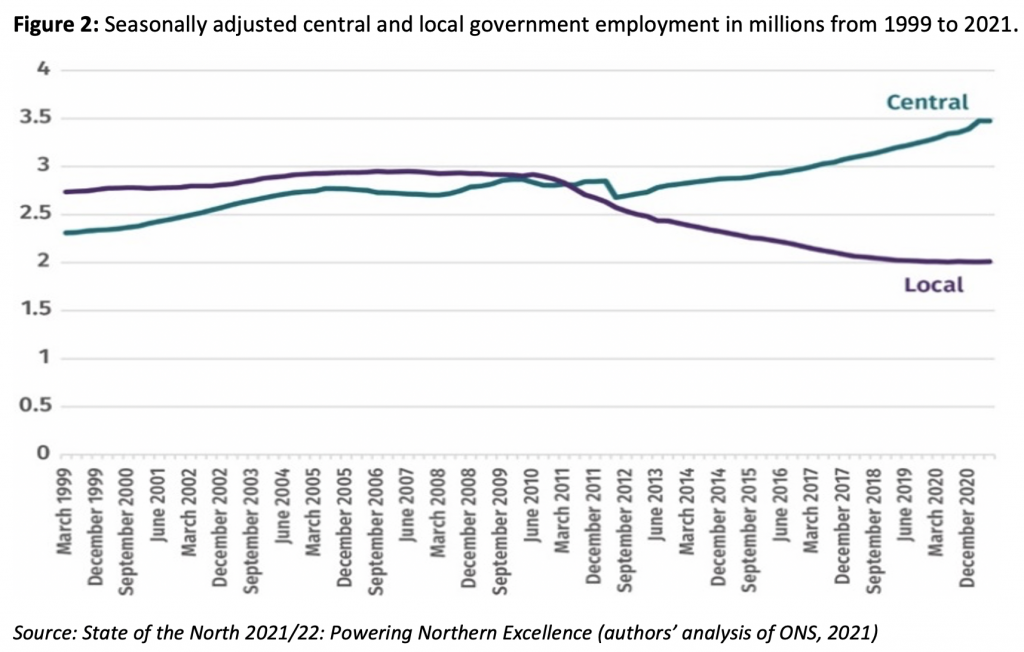 This centralisation of resources is problematic because decision-makers in London are too far remote from the communities that need to be put at the heart of the levelling up agenda. As Whitehall’s influence increases, the already limited autonomy of local leaders gets further eroded. But to be effective, levelling up cannot be imposed from the top-down: it needs to be place-based, and should be driven from the bottom-up, with genuine input from local areas.

Indeed, our report shows that innovative and transformative initiatives are taking place at the grassroots level – highlighting how, despite the government’s hesitance to let go of power, the North is levelling up for itself. For instance, Mayoral Combined Authorities across the North, such as Greater Manchester, Liverpool City Region, and West Yorkshire Combined Authority have harnessed both their soft and hard powers to co-design employment charters with trade unions and employers to foster the creation of good jobs. Local councils are also taking matters into their own hands, finding innovative solutions to tackle the climate crisis, such as the Leeds Climate Innovation District – one of the UK’s pioneering net-zero developments, supported by Leeds City Council.

Furthermore, grassroots organisations, like the Wharton Trust in the North East, are building community resources from the ground up to support people living in some of the most deprived wards in the UK, providing employment and training advice, exercise classes, community libraries and community-based WI-FI schemes. These examples illustrate that northern excellence deserves better recognition and needs to be matched by real action from central government, through a substantial shift of power away from Whitehall and into our town halls. Equal partnerships and better cooperation must be nurtured between central and local government, based on mutual respect, trust and collaboration – but this will require radical reforms.

The much-awaited and delayed Levelling Up white paper offers a golden opportunity for the government to finally deliver on its promises and ensure all areas can prosper. Our research sets out a clear roadmap to achieve this. First, the government must broaden and deepen devolution: transferring real fiscal and policy power to subnational governance institutions across the whole country, so that all places can benefit from it, rather than just a selected few. Second, the assumption that ‘Whitehall knows best’ must be challenged – resetting central-local relations, so that all levels of government can work collaboratively. This is essential to ensure that decisions that affect the North are anchored in local communities’ interests, and not just those of the central government.

The radical change we outline is possible – but the government has to show it has the ambition, plans, and political will to shift the dial on regional inequalities and overcentralisation.

Amreen Qureshi is a Researcher at IPPR North.

When the City of London’s bubble burst, it was the state and the real economy that had to take the hit