When the recession hit many predicted that London would fare the worst. Henry  Overman argues that while incomes and employment have contracted in London in the last two years, the capital’s high proportion of professional and service occupations as well as government interventions (including the bank bailouts) have shielded it from the worst of the recession thus far, and has even led to some above average rises in spending.

It was widely expected that London would be the most severely hit of the UK regions in the recession brought about by the 2007-08 financial crisis. Because London was more reliant on financial services, and because financial services were most directly affected, incomes were expected to fall harder than in other cities, and it was predicted that unemployment figures would be greatest in the capital.

However, this has not turned out to be the case, and both income and employment in London have faired better than expected. The latest data show that London’s income per capita fell around 2.5 per cent between 2008 and 2009 (see table below), while it fell 2.9 per cent for England as a whole. Only the north-east and west had lower falls than London, at around 2 per cent. But between 2007 and 2008 London grew nearly twice as fast as those two regions and, of course, London was already much richer. In terms of employment, the UK saw peak-to-trough falls of 3.9 per cent, whereas London saw only a 2.6 per cent fall. 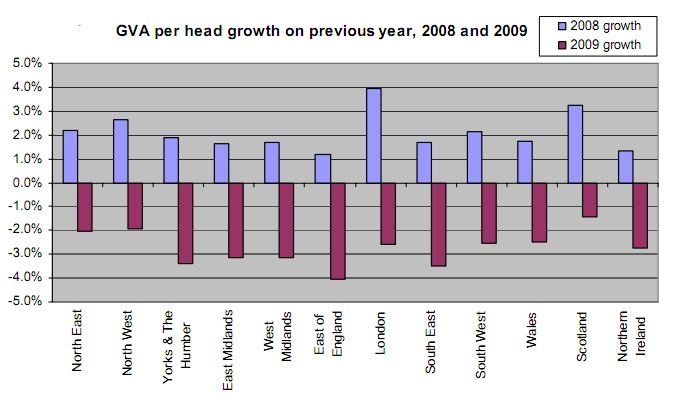 House prices too tell a similar story. Data from the Department for Communities and Local Government shows that between March 2008 and December 2010 house prices rose 1.4 per cent in London, compared to a fall of 1.2 per cent in the south-east. The Midlands and Northern regions saw falls in excess of 3.5 per cent whereas in Yorkshire house prices fell 6.1 per cent. There were also many other signs that the capital was holding up and that Londoners were happier than ever to spend on luxuries, such as a growth in theatre box office takings between 2008 and 2009. Between 2007 and 2010, average attendance for London premiership football clubs was flat, while it fell 6 per cent in the midlands and 5 per cent in the north. As a colleague remarked to me, “it feels like London got away with it”.

But if London did get away with it, how did it get away with it? One crucial factor is that the recession has not been as bad for the middle classes as expected. According to the Labour Force Survey, for England as a whole, professional and service occupations were less badly affected than administrative, trade and basic occupations. This helps the south as professional occupations account for a larger proportion of the labour force (nearly 50 per cent, compared to under 40 per cent in the midlands and the north). Reinforcing this overall trend, London’s employment in professional occupations held up particularly well and London also performed better in administrative, trade and service occupations. Only in the lower skilled occupations did London fair worse.

Understanding why the professions faired better in London than in the rest of the UK is difficult. It’s unlikely to be explained by public sector employment. Only in the south-east does public sector employment account for a lower share of the economy. The same is true for public sector expenditure as a percentage of overall expenditure. An outflow of illegal immigrants, differences in the effect on hours worked and real wages may all have played a minor role. London has higher house prices, so the impact of interest rates on mortgage payments has been larger. But, as with fiscal policy, relative to expenditure there is not a big differential with the rest of the country. In contrast, the impact on the very wealthy probably worked against London. The overall wealth of the UK’s richest 1000 fell by £77bn between 2007 and 2009.

Could the bailout of the banks play a role? Again, this is a surprisingly difficult question to answer. The Office for National Statistics haven’t yet produced the regional distribution of jobs directly affected by the government bailout the banks. Looking at what happened to public sector employment by region when these workers get reclassified gives a rough approximation. This suggests that London had the highest share of “bail out” jobs: around 16 per cent of the 220,000 jobs affected. Turning to the indirect effect of bank bailouts, Andrew Haldane at the Bank of England estimates that reduced risk because of government measures saved the banks £107bn in interest costs in 2009. More than 90 per cent of this went to the big five – HSBC, Barclays, RBS, HBOS and Lloyds – all of which are disproportionately represented in London. We do not yet know the impact of this on the London economy.

At least one other government intervention also disproportionately benefited London. The Olympic site currently employs  10,000 workers (Crossrail a further 2,000). The effect of these interventions can be seen in the employment numbers. According to the Work Force Jobs Survey, between 2007 and 2010 construction employment fell twice as much in the north as it did in the greater south-east (16% versus 8%). Employment in financial services fell 10 per cent in the north, it rose 5 per cent in the greater south-east.

So, where does all of this leave us? First, in absolute terms and relative to expectations, London appears to have successfully gotten away with it. The over-representation of the professional occupations partly explains this. The bailout may explain why these occupations did even better in London. But other explanations are possible. The shift in financial sector employment may be driven by the increased importance of timely information flows when things turn bad. Despite improvements in ICT, economists still think that spatial proximity play an important role in exchanging information. Alternatively, London may be benefiting from the depth and breadth of its labour market. Finally, Spatial Economics Research Centre research suggests that the most talented are highly concentrated in London. There is more research to be done to understand whether these economic mechanisms have played a role.

Finally, there are two important things to note. First, to the extent that the bailout and banking sector explains London’s performance, Boris Johnson may be right to worry about “banker bashing”. Second, some Londoners of course didn’t get away with it: the bottom end of the London labour market has seen falls in employment in line with the UK average. This contrasts with other broad occupational categories all of which did better in London. Housing (and other) benefit reforms will hit London and the South East particularly hard. London may have got away with it, but things do not look so rosy for London’s poor.

This blog post is based on the lecture ‘How did London get away with it? The recession and the North-South divide’ to be given by Henry Overman at the LSE on Thursday 20th January. Click here for more details.

Posted In: Fairness and Equality | Localism and the Big Society 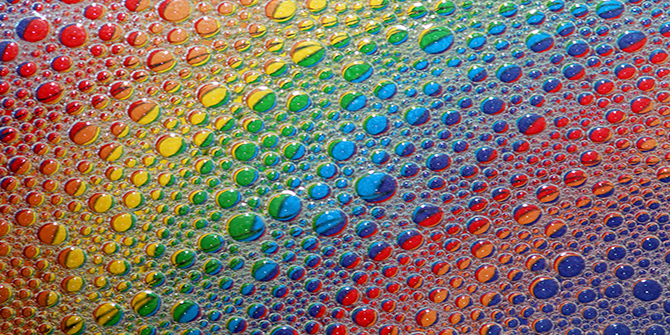 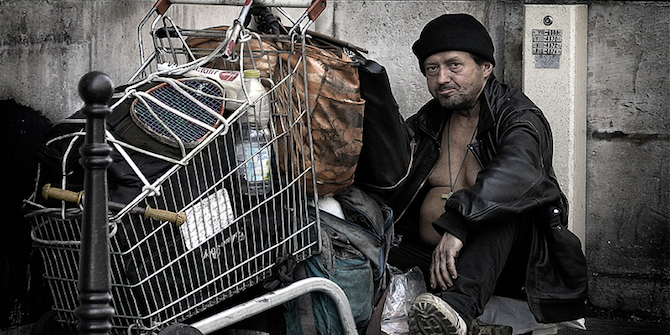