Labour candidate for the London Mayor Ken Livingstone discusses his plans to introduce a London-wide education maintenance allowance, campaign for a London ‘Living Rent’ and to resign within six months if he has not achieved his goals to cut public transport costs. This is the second in a three part series with the mayoral candidates, including Brian Paddick and Jenny Jones, with an introduction by Tony Travers.

London is the greatest city in the word, but life is not easy for Londoners at the moment. This election is about easing the squeeze that ordinary Londoners are acutely feeling and standing up for them against the damaging actions of the Tories in London and national government.

I am fiercely motivated to stand in this election. At a time when millions of Londoners are struggling, I do not believe enough is being done to help them. As I watch my family grow up in London, I do not want to see them living in a city where no one is taking action to put Londoners first. Fares are rocketing, police numbers are being cut and young people’s aspirations are being shattered. Londoners need a city where they can afford to make their home, feel safe in and not be priced out of. That’s why I’m pledging to take action on fares, policing and the cost of living.

At the centre piece of my election offering is my Fare Deal policy. London has some of the most expensive transport fares in the world, and under Boris Johnson fares have risen at inflation-busting rates. In four years the cost of a bus ticket has increased by 50 per cent, and travelcards for zones 1-2, 1-4 and 1-6 are all up by 20 per cent. Yet official documents show TfL built up a huge annual operating surplus of £729 million last year. This surplus cash is from the operating budget and has no bearing on the capital budget.

It is my belief that at a time like this, when ordinary Londoners are struggling to make ends meet the Mayor should be using the levers he has, such as fares policy, to ease Londoners’ financial pain. That’s why my Fare Deal plan will see fares cut by 7 per cent in 2012, frozen for a year in 2013 and then rising by no more than the rate of inflation from 2014 onwards. This 7 per cent cut would wipe out Boris Johnson’s 2012 fare increases. On top of that, we’ll also slash a bus fare from £1.35 to £1.20 (a saving of 11 per cent). This will make a difference to all Londoners who use public transport, including students who will benefit through the discount. On average, our package will leave Londoners £1000 better off over the next four years. I am so serious and confident about delivering this that if I have not done so by 7th October 2012 I will resign.

The increase in fares that Londoners have suffered over the last four years is down to the Tory administration running London. But London has also been hard hit by the actions of the Tory-led national government, whilst Boris Johnson stands on the sidelines and acts as a cheerleader for their cuts.

Despite the fact that over 85,000 young Londoners have lost out on their Education Maintenance Allowance, Boris Johnson has failed to act for them. Over the last year I have met young Londoners in every borough and  over 4000 college students have taken part in ‘Tell Ken’ Q&A sessions with me. The issue of the loss ofEMAhas consistently been one of the top issues raised. That is why I’m pledging that I will work to restore a London-wide Educational Maintenance Allowance of up to £30 per week during term. This will be done by bringing together existing funds in colleges, universities, and local authorities, and working with the Association of Colleges, London Higher and councils across London to deliver this. For many studentsEMAoffers a lifeline to continuing their education and it is not only in their interests but in the interests of London that they have the best shot at the brightest future.

From young people to old, I will work to ‘ease the squeeze’ on Londoners. Thanks to the Tory-led government and Tory mayor in London, increased numbers of people are facing a stark choice between heating and eating as energy bills soar. Not only have the government cut the winter fuel allowance, which is intended to help older people keep warm over the winter, by £50 for the over 60s, and £100 for the over 80s, but Boris Johnson has failed to take action to tackle this. On his watch, London has lost out on over £400 million of funding for home energy efficiency that could have been secured from energy utilities national obligations. This has meant hundreds of thousands of London households paying higher energy bills than they needed to. If I am elected, I will make cutting Londoners’ fuel bills and reducing carbon emissions a Mayoral priority. Top of this list will be insulating older people’s homes. By securing London’s fair share of home energy efficiency funding, thousands of pensioners struggling with energy bills would be in line to receive free insulation.

Of course, the biggest cost of living for most Londoners is the cost of housing. London is in the midst of a housing crisis, on which action is required now. We are not talking only about the poorest or most marginalised – there are thousands of Londoners, many aspirational and well-qualified, who by definition will never get into social rented accommodation. Most of them cannot afford to buy, and are going to be in the private-rented sector for a very long time. Yet there is no London-wide action to address their housing issues. For too long, Londoners living in the private rented sector have been ignored. I will respond to this by establishing the first London-wide non-profit lettings agency, and launching a campaign for a London Living Rent.

As Mayor one of my proudest achievements was that I increased the number of police in the capital by 7,000 and put Safer Neighbourhood Teams into every community across London, dedicated to the needs of each specific neighbourhood. But by contrast, Boris Johnson has admitted that he has cut police numbers by 1700 – meanwhile incidents of violent crimes including robbery, knife crime and rape have all risen. That’s why, under my Policing Pledge, I’m promising to bring back the police that have been lost. I’m pledging to  reverse Boris Johnson’s cuts to 1700 police officers and reinstate sergeants to all 600 Safer Neighbourhood Teams, more of which will be beefed up to a minimum of nine officers, reversing the Tory Mayor’s cut to 300 sergeants in 2011.

The least Londoners should be able to expect is a home, street, neighbourhood and city that they can feel safe living in. I am running a campaign about the real issues facing Londoners’ lives. Above all, I care passionately about London and will always put ordinary Londoners first. This is a great city, and I want it to be the best city it can possibly be, for Londoners of all ages, and for this generation and generations to come.

The British Politics and Policy blog team attempted to contact the Conservative candidate, Boris Johnson and his campaign team, on numerous occasions. However we had not received a response at the time of publication.

Ken Livingstone was London’s first elected Mayor from May 2000-2008. He was elected MP for Brent East in 1987 and previously served as the Leader of the Greater London Council from 1981-86. 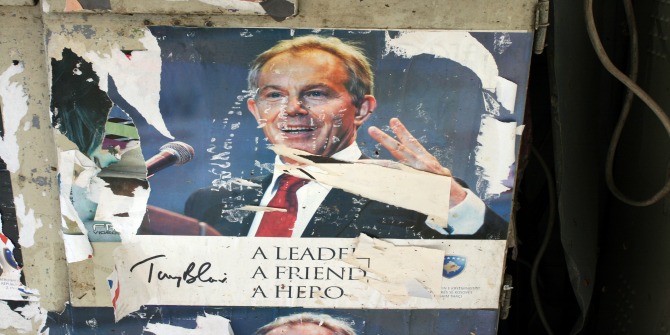