With London leading the way, Western financial centres are providing the capital for coal extraction around the world. James Leaton argues that the short-term view stock markets take and the inability of capital markets to properly factor in long-term climate change risks means that a carbon bubble is developing. Capital markets will eventually have to readjust.

This is the fourth article in a series on climate change and environmental policy being hosted by British Politics and Policy at LSE.

London is the financial centre of choice for the world’s coal, oil and gas companies. The coal, oil and gas reserves sitting on the London stock exchange are equivalent to ten times the UK’s domestic carbon budget to 2050. With the capital markets as short-term as ever, it is essential the Bank of England steps in to protect investors from the increasing carbon intensity of the City.

Whilst London has played a leading role in developing carbon markets and creating new financial products, this is small fry compared to its role in the fossil fuel industry. A decade ago, the FTSE100 was around 10 per cent natural resources companies. By May 2011, one third of the FTSE100 was mining, oil and gas companies by market capitalisation.

The level continues to increase with the addition of companies such as Bumi, Glencore, and Evraz in 2011. This year the largest Mongolian coal company Erdenes Tavan Tolgoi is expected to raise $3 billion as it offers shares in its 5 billion tonnes of coal for the first time.

Carbon Tracker’s map of where carbon reserves are listed paints a picture of the role of western capital in financing coal extraction around the world. 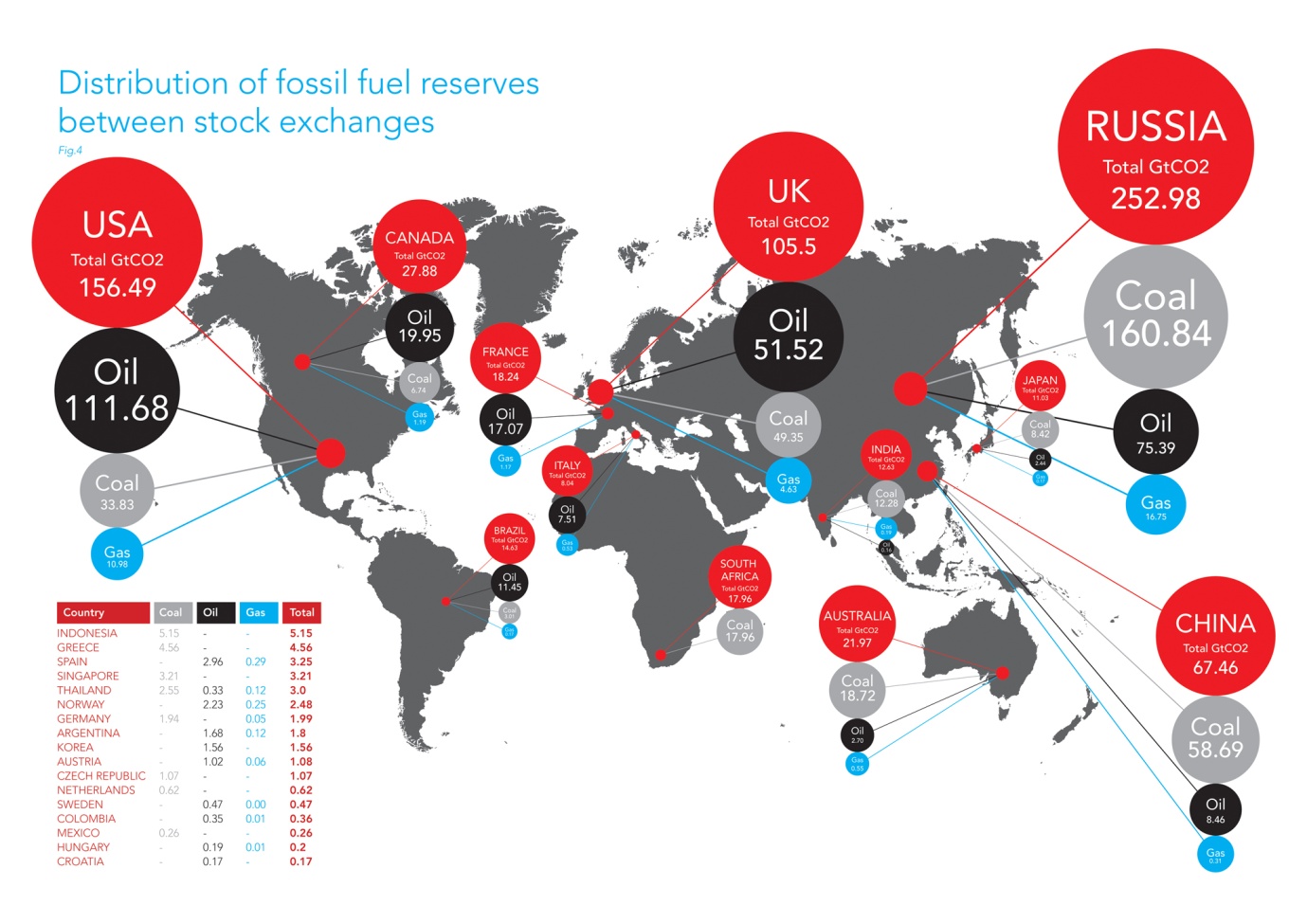 Tracing the sources of capital for these fossil fuel companies raises some interesting questions for climate change negotiations. Western economies should not be so quick to criticise developing countries, when it is our financial centres providing the capital and our banks brokering the deals. US banks are the most active in arranging share issues.

A recent comparison of fossil fuel reserves compared the reserves of each country with their climate negotiating position. This doesn’t claim to be a perfect science, but it appears to be a relevant factor for many countries. As energy security pressures grow, there will be increasing tension between the have lots and have nots. This provides further incentives for countries importing fossil fuels to invest in renewable alternatives.

Where is the coal listed in London? A third of coal listed in the UK is actually located in Australia, where the government has recently agreed to deliver a carbon tax and emissions trading scheme. So “UK” investors are potentially exposed to climate change regulatory risk in Australia. However, Australia and Indonesia export around three-quarters of their coal production. In fact, around half of the coal owned by UK-listed companies is supplying developing economies in China, Russia, India and South Africa.

The fossil fuel intensity of the London exchange keeps increasing, and as a result the carbon bubble issue has been raised with the Bank of England Committee that reviews financial stability. The Bank has responded with the criteria it uses to assess financial stability risks and agreed to meet on the issue. This is the regulator’s opportunity to demonstrate it can act to protect investors from systemic risks.

The best characteristic of financial regulation is that it can be introduced relatively quickly without primary legislation. In 2009, concerns were raised about mining companies coming to list in London overstating their reserves. As a result, the London Stock Exchange issued guidance for companies to engage a ‘competent person’ to produce a statement on reserves to include in their listing documents. London has a status to maintain amongst exchanges and therefore needs to act to ensure investors are being given adequate information about climate change risks.

As a major global financial centre, many investors track the performance and composition of the FTSE indices with their funds. This means investors are following the herd towards recarbonisation without even realising it. Many funds track an index passively to gain diversification in their portfolio. However, the rising concentration of coal, oil and gas companies in London eliminates diversification. Other fund managers are benchmarked against the indices and therefore have little incentive to deviate too far from its composition for fear of underperforming.

The short-term approach applied by most analysts means they cannot currently factor climate change risk in. The Kay Review is looking into the structure of the equity market with a view to eliminating ‘bubbles’ and promoting a long term approach. Getting the capital markets to factor in long term climate change risks should be one of the tests applied to see if this review produces some effective recommendations.

James Leaton is the Project Director of The Carbon Tracker Initiative. He has led the research and analysis of listed fossil fuel reserves and is the lead author of the ground-breaking report: ‘Unburnable Carbon: are the world’s capital markets carrying a carbon bubble’. James was previously a sustainability and climate change consultant at PricewaterhouseCoopers advising financial services clients; spent five years at WWF as a senior policy advisor, concentrating on the links between energy and finance; and worked initially as a responsible investment analyst in London.