Looking back and ahead: Lessons from the 2008 Beijing Olympic Games

Looking back and ahead: Lessons from the 2008 Beijing Olympic Games

Hyun Bang Shin looks back at the Beijing Olympics to derive some indication of the what the legacy of the London Games might be. He warns that diversion of national resources may pose additional development opportunities for host cities, but constraints for others in the country in terms of resource redistribution.

As London is gearing up for the 2012 Summer Olympic Games, people may begin to wonder what legacy mega-events such as the Olympic Games may provide host cities with. One of the ways in which this question can be asked is perhaps to examine what happened to other host cities. Having had a close look at the experience of the Beijing Olympic Games, I present a few cases for further thoughts. Readers may wonder if there is any learning outcome that can be drawn from Beijing for other host cities, as cities come with diverse sets of political, economic and social backgrounds. However, mega-events such as the Olympic Games pose unique constraints and opportunities for host cities, which may transcend national borders. I discuss three experiences in particular: (i) event-led spatial restructuring; (ii) threats to neighbourhoods; and (iii) exclusion of marginalised population. 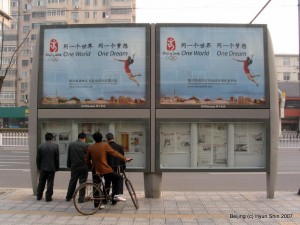 First, for Beijing, the 2008 Olympic Games was an opportunity for the city to facilitate investments in the built environment, speeding up the construction of key infrastructure that Beijing needed to fulfil its aspiration to become ‘world-class city’. With the official slogan of ‘One World, One Dream’ (see Figure 1), the Games meant to align China’s dream with that of the world. These included a new airport terminal and high-speed rail connections as well as new metro lines or extensions to existing lines. In particular, the city-wide coverage of metro connections with hugely subsidised fares substantially enhanced local residents’ mobility. The Games preparation between 2001 and 2008 enabled Beijing to concentrate municipal and national resources on expanding city’s development capacity, and bring about event-led spatial restructuring that substantially transformed urban landscape. One of the distinctive spatial outcomes of the Games was Beijing’s expansion into its northern sub-urban areas where the Olympic Games complex is provided.

Cities facing mega-event hosting are constrained by the non-negotiability of event deadlines, and Beijing was not exempted. During the seven-year period, state-led investments were directed towards mega-projects throughout the city, resulting in the spending on infrastructure that far exceeded the actual Games operation costs. When cities promise to deliver large-scale mega-events such as the Olympic Games, host cities and countries are often pre-occupied with the ambition to realise a particular development vision. For Beijing, it was the aspiration to become a ‘world-class city’ and endorse China’s newly acquired global status as economic powerhouse, which justified the concentration of municipal as well as national resources to realise the ‘best and the most expensive’ Games ever for Beijing. However, the heavy focus on physical infrastructure begs the question of whether money was diverted from the ‘next best’ project, especially the more socially oriented programmes that addressed the issues of inherent poverty and inequality in the country. 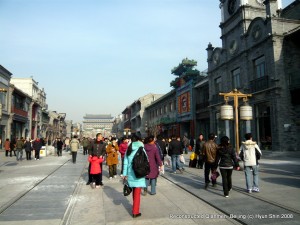 Second, the large-scale spatial restructuring was accompanied by the re-writing of urban residential landscape in the forms of urban redevelopment and beautification programmes. Dilapidated neighbourhoods in central locations were subject to wholesale demolition and redevelopment, making way for high-end offices, luxury homes and commercial premises. Surviving historic quarters such as Qianmen, a historic market place south of Forbidden City, experienced what locals refers to as ‘fake-over’, which involved demolition and reconstruction to mimic old architectural style (see Figure 2).

Human costs resulting from demolition were beyond imagination. According to a 2007 report from the Centre on Housing Rights and Evictions (COHRE), it was estimated that Beijing might see up to 1.5 million local residents displaced due to the preparation for the Olympic Games. This figure was actually referring to all the displacement that occurred as part of urban development and redevelopment projects. As the estimates were based on officially available figures, it would be very likely that migrants were not counted, suggesting that the scale of displacement might be even more sensational. The COHRE estimation naturally brought about immediate rebuttal by the municipal government, which tried hard not to taint the glory of the Games. Nevertheless, the city government’s drive to transform the appearance of Beijing and its emphasis on the Games preparation would have created a strong basis for ‘demolition under the names of the Olympic Games’ in order to accelerate urban transformation.

Furthermore, Beijing’s quest to build ‘New Beijing, New Olympics’ came with a heavy emphasis on environmental improvement projects. Various government operations were implemented, which could be referred to as ‘social cleansing’ to make sure ‘socially undesirables’ were removed from Beijing’s urban space. These measures affected beggars as well as street vendors that attracted a large number of migrants without proper licenses. Migrant workers in the construction industry were also discouraged to stay in the city as construction sites were temporarily closed to reduce air pollutions. In-ward travelling by migrants was also discouraged due to severe identity checks imposed by the security forces.

Such measures reflected the built-in stigmatisation of migrant workers despite the fact that they were literally the builders of China’s cities and the providers of day-to-day services for urban citizens. Until the early 2000s, major cities in China used to implement periodic deportation of and crack-down on migrant workers who lacked legal permission to stay in cities. Critics point out that cities in China are increasingly moving towards ring-fencing welfare benefits for urban citizens, which effectively exclude those migrants from other localities. Therefore, the exclusion of migrants from the festive mood in the Olympic City of Beijing is not necessarily generated by the Olympic Games per se but a result of the ‘state of affair’ in China, inherent in the local political culture.

What lessons do these experiences tell us about forthcoming Olympic Games including the 2012 London Olympiad? First, while the unprecedented level of investments as experienced in Beijing might be justified by the size of Chinese economy and its success in the world, all mega-events tend to incur heavy payments that often go beyond city’s own budget, therefore calling for national subsidies. This was not an exception even for Beijing, and will not be an exception for most other host cities either. Such diversion of national resources may pose additional development opportunities for host cities, but constraints for others in the country in terms of resource redistribution. Critics may have differing views about how this arrangement would condition the future growth potential of a country as a whole. But, short-term economic benefits tend to be emphasised emphatically by event promoters, while speculative long-term social, economic and cultural benefits tend to be forgotten over time. More problematic would be the case of diverting resources away from social programmes, as this might incur detrimental impacts on a particular ‘Olympic’ cohort.

The attention to security issues in recent years also poses greater challenges for ensuring Olympic Games for all. Mega-events are increasingly hosted with a heavy degree of policing and social cleaning, justified by the government’s claim to ensure public safety and environmental improvement. This often results in a particular group of urban inhabitants being more negatively affected than others. For Beijing, it was the migrant workers, homeless people, separatists or human rights protesters who were particularly targeted by the local authority, revealing the inherent social, economic and political contradictions. These experiences are prone to replication in other host cities, while strengthened security measures as exception tend to remain as permanent fixtures even after events.

Mega-events such as the Olympic Games are presented with glamour and excitement for participants, spectators and global media consumers. The festive mood as well as patriotic sentiment associated with such events often make it difficult to redirect our attention to the shadowy side of the Games. It is however what lies in the shadow of mega-events, which host cities have to address once the excitement is long-gone.

Hyun Bang Shin is Lecturer in Urban Geography in the Department of Geography and Environment at the London School of Economics. His main research interests lie in critically analysing political economic dynamics of contemporary urban (re-)development and its socio-spatial implications, with special emphasis on Asian cities. Research topics include urban entrepreneurialism, mega-events, urban conservation, politics of redevelopment, displacement and the right to the city. He had previously carried out a research project to investigate the housing impact of mega-event hosting in Chinese cities funded by the British Academy Small Research Grant. More recently, he has completed research on socio-spatial impacts of mega-events with a case study of the 2010 Guangzhou Asian Games, funded by the STICERD/LSE Annual Fund New Researcher Award (2009-2011). He is currently involved in URBACHINA, a four-year (2011-2015) international research collaboration funded by the EU Seventh Framework Programme (FP7), and is one of the key organisers of the Urban Studies Seminar Series (2011-2012), Towards an Emerging Geography of Gentrification in the Global South, funded by the Urban Studies Foundation and the Urban Studies journal.