Since the abolition of Manchester’s city region government by Margaret Thatcher in the 1980s, councillors and officers have been sponsoring the transformation of the city by private property developers. Peter Folkman, Julie Froud, Sukhdev Johal, John Tomaney and Karel Williams explain the unrecognised and unintended consequences of this transformation.

Manchester has been at the centre of claims about an urban renaissance. Specifically, it is claimed that, “Greater Manchester has been broadly successful in managing the transition to a post-industrial knowledge intensive economy. It has been able to capitalise on the positive agglomeration effects emanating from its size, density and diversity to reinvent itself and unlock this growth potential”. In a recent report, we brought together evidence on diverse indicators from a variety of sources to tell the story of Manchester’s transformation over the past 25 years and test these claims.

The report shows how local government has sponsored the transformation of the city by private property developers who have built a new town of office blocks and adjacent flats in Manchester City and Salford, in which a young in-migrant workforce lives. This formats the city for exclusive growth with gross internal inequalities which cannot be changed by upskilling workers or adding public transport links to the deprived districts of east Manchester or the northern boroughs like Oldham and Rochdale. In light of the upcoming Metro Mayor election, these issues deserve wide debate.

Using the Gross Value Added (GVA) measure as the standard measure of city region achievement, London GVA per capita is twice that of Greater Manchester; Manchester City GVA per capita is twice that of northern boroughs like Oldham, while Manchester City itself has many deprived districts. Using the same GVA measure and time series, the inconvenient truth is that Greater Manchester has not pulled away from other British core cities. Greater Manchester has done no more than hold its position against other British core cities and the internal relativities between the central City and the northern boroughs have hardly changed since de-industrialisation in the 1980s.

Against this back ground, hopes for inclusive growth whose benefits would be distributed to the whole population face challenges. 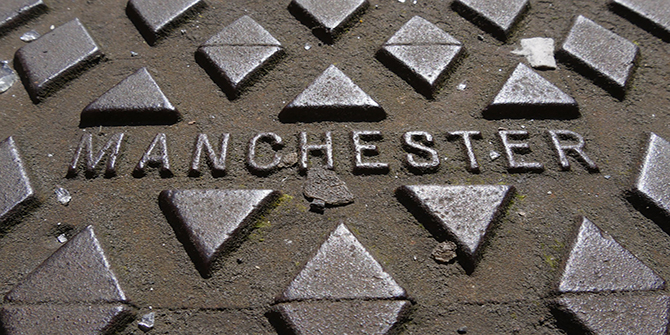 Mrs Thatcher abolished the city-wide Greater Manchester County Council in 1986 because it was potentially a locus of opposition. Pragmatic councillors and officers in the central boroughs of Manchester City and Salford then concluded that they would have to get things done through the private sector. And from the late 1980s, in a de-industrialised city, that meant getting things built by giving private developers planning permission to put up whatever was most profitable.

The recreation of a new Greater Manchester Combined Authority in 2011 inaugurated a new phase of explicit city-region wide economic policy in the name of the ten boroughs. Uneven development and internal inequalities did not become major issues because policymakers assumed that public transport improvement could ease the problems by “bringing people to jobs”.

A parallel new town of offices and flats

From the mid-1990s, the central city and the inner south-west around Salford Quays were rebuilt on a high-rise logic of profit as private developers turned square footage into cubed rental value. The transformation of office space began at Barbirolli Square in 1997, with the Spinningfields development subsequently providing a new centre for the central business district; private developers also built adjacent lift-served blocks of one and two bedroom flats, typically sold to buy-to-let landlords who rented then out to junior white-collar workers.

The scale of the new development over the last 20 years is spectacular and it has created a kind of parallel new town of work spaces and flats in the centre whose format encourages in-migration to the centre, not commuting.

Since 1997, Manchester City centre (excluding Salford and Trafford) has added 5.38 million square feet of office space which creates around 50,000 new work spaces. In parallel, there was large-scale building of one and two bedroom flats with Manchester and Salford together adding 44,000 flats between 1991 and 2011. This reformatting took place in a city which had a very limited capacity to create net new jobs.

The weak record of Greater Manchester on job creation has been obscured by booster claims which confuse cyclical gains and structural effects and fail to separate out private from public sector job creation. We hold activity levels constant by calculating job creation over two sub-periods – 1998-2008 and 2008-14 – which begin and end with Greater Manchester unemployment rate around 7 per cent; and then cross check by considering long run trends from 1991-2015.

In the pre-2008 period, job creation was heavily dependent on the public sector which was creating jobs in the centre. The public sector accounted for more than half of the 46,000 extra jobs created in the ten Greater Manchester boroughs between 1998 and 2008. Because of the concentration of hospital, university, and administrative functions in central Manchester, Manchester City claimed 16,000 of these jobs, accounting for 40 per cent of its total job creation.

The post-2008 story is dismal. The outer northern boroughs of Oldham, Rochdale and Tameside are in a dire plight because they are now net losers of both private and public sector jobs. Once again, the net gains are concentrated in the central city and the inner south-west quadrant. From 2008-14, Manchester City gains 30,000 net new jobs, while four of the ten GM boroughs see job loss. A commuting solution is then blocked by the formatting of the city.

Not commuting but in-migration to central flats

Central Manchester is not like central London, which is substantially dependent on radial commuting by public transport from outer boroughs. Long distance commuting is discouraged when the Manchester City region combines relatively cheap central flats and inner residential suburbs with low wages and high fares. In 2011, 109,000 residents lived and worked in the borough of Manchester City and this almost exactly equalled the net inflow of 108,000 commuters from outside the borough.

Excluding movements from Salford to Manchester, 60-70 per cent of the commutes in to Manchester City from the nine other boroughs are by car. Lower public transport fares would help but there is often no public transport alternative to the private car for orbital movements; and the major volume increases between 2001 and 2011 are in non-radial commutes which have a high level of car dependence.

The primary limit on commuting into the centre is increasingly not access to public transport but the ready availability of one and two-bedroom inner city rented flats. Because the flats encourage in-migration of 25-34-year-olds to Manchester and Salford who are generally too old to be students but young enough to be mobile and unencumbered. Between 2001 and 2014, the population of this age group increased by 46,000 in Manchester City and Salford and it declined in all other boroughs; 34 per cent of these inner city 25-34-year-olds are born outside the UK.

When Greater Manchester has been formatted for exclusive growth by the mono-culture of flat building in the centre, the city region needs a policy reset. The policy reset should reflect the city and economy as it is:

The Brexit result is a warning to Greater Manchester politicians who need to reconnect with their voters by renewing the civic offer. Instead of relying on property development as the accelerator in the centre, they need to rely on the foundational economy as the stabiliser in all ten boroughs. Because the quantity and quality of foundational goods and services is the social precondition of civilized life, and in activities like adult care, the Greater Manchester Combined Authority could start out on the road of social innovation and radical experiment to benefit all citizens.

Note: you can read the full report on which this article draws here.

Peter Folkman is an Honorary Professor at the Alliance Manchester Business School.

Sukhdev Johal is Professor of Accounting and Strategy at Queen Mary, University of London.

John Tomaney is Professor of Urban and Regional Planning at The Bartlett School of Planning, University College London.