Support for the European Union within the UK has traditionally been lower than in other European countries. Benjamin Hawkins assesses the role of the media in influencing public opinion, arguing that there has been a consistent eurosceptic discourse within a number of influential newspapers. This discourse has not only influenced public opinion towards the EU, but has also had an impact on the policies of the British government in dealing with their European partners.

The UK’s membership of the EU is one of the most contentious issues in British politics. British citizens have been less likely than those of any other EU member-state to define their identity as even partly European. Existing scholarship indicates that these facts are not unrelated; exclusively national identities are strongly correlated with low levels of support for the EU.

Perhaps the clearest articulation of eurosceptic sentiment is to be found within the British print media and the right-wing press in particular. This is of crucial importance given that the media is citizens’ principal source of information on EU affairs and the substantial evidence that media framing influences public attitudes towards the EU. I analysed coverage of the EU treaty reform process (2003-2007) in five national newspapers, finding that the feeling of separation from the EU expressed by British citizens mirrors the representation of Britain’s relationship with the EU in newspaper discourses.

While there is a predominant eurosceptic discourse in the UK print media, there are also counter discourses which attempt to challenge it. The eurosceptic discourse is most clearly evident in the right-wing press (The Daily Telegraph, The Daily Mail and The Sun) in which pro-European voices are almost completely absent. However, its influence extends beyond this. It shapes the terrain on which broader debates about the EU are conducted and the terms in which they are couched within titles such as The Guardian and The Observer, which are broadly favourable to the EU.

There are two principal frames evident within eurosceptic discourse: the EU as a foreign power and the EU as a bargaining forum. The first of these depicts the EU not as an international organisation of which the UK is a member-state, but as a state-like entity from which the UK is excluded and with which it engages in a bilateral relationship. Within this frame, the EU is seen as a hostile, quasi-imperial power which poses an existential threat to the UK.

The second dimension of the eurosceptic discourse depicts the EU as a bargaining forum in which the UK’s interests are set against those of other member-states, particularly France, Germany and a shifting coalition of allies. Furthermore, the policies and institutions of the EU are seen to work against the UK’s interests. France and Germany, as the ‘core’ EU member-states, are seen both to govern the pace and direction of European integration and to reap the rewards from it. The UK, by contrast, is consigned to the periphery of the EU with limited influence over decision-making and enjoying few benefits from being a member-state. The apparent marginalisation of the UK from the European mainstream reinforces the idea that the EU, by its very existence, poses a threat to the British national interest which must be guarded against.

Underlying both these framings of the EU are the themes of separation and subjugation by powerful outside forces. Consequently, the role of the British government is to defend the national interest by avoiding or delaying any further integration. The description of Britain’s experience within the EU in these terms depends on the privileging of the nation as a political community and the nation-state as a form of government. In both strands of the eurosceptic discourse, the EU is represented in terms of the nation-state: either as a forum for inter-state bargaining or an emerging super-state itself. These assumptions about the nation constitute a nationalist meta-narrative underlying the eurosceptic discourse. There was a remarkable degree of consistency in the themes and assumptions evident in tabloids and broadsheets and dissenting voices were almost completely excluded from both.

Nevertheless, in the Guardian, Observer and the Mirror there is evidence of a counter-discourse which challenges  and the assumptions on which it is the eurosceptic discourse is based. The EU is given credit for the unprecedented period of peace, stability and democracy experienced in Europe over the last half-century. Treaty changes are seen as implementing necessary reforms which will allow a Union of 27 member-states to function more effectively. However, many themes from the eurosceptic discourse are also present. Space is also afforded in these pro-European titles to overtly eurosceptic voices. Thus, while the left-wing press offers a more balanced and less uniform account of the European integration process, it demonstrates the wider influence of the eurosceptic discourse in governing the terrain of the debate.

These findings are of great relevance to scholars of the European integration process. Given the reticence towards the EU evident in both surveys of public opinion and British government policy towards the EU, a clearer understanding of the discursive terrain on which debates about the EU are conducted is of crucial importance. Furthermore, the political and economic importance of the UK means that these issues have potentially far reaching ramifications for the future development of the European integration project.

In searching for answers as to why British citizens remain so unenthusiastic about the UK’s position as an EU member state, it is necessary to understand the complex interrelationship between citizens’ attitudes and broader social discourses. Similarly, we must take account of how both public opinion and media debates influence the content and presentation of government policy towards the EU. By examining the structure of the eurosceptic discourse – and highlighting the parallels which exist between citizens’ attitudes and the representation of the EU in the print media – this article hopes to function as a catalyst for future research on the connections between these areas.

This is a summary of the article: Hawkins, Benjamin 2012. “Nation, Separation and Threat: An Analysis of British Media Discourses on the European Union Treaty Reform Process” Journal of Common Market Studies 50(4): 561-577. Elements of this article are reproduced with the permission of the editors.

Benjamin Hawkins – London School of Hygiene and Tropical Medicine
Benjamin Hawkins is a Research Fellow in the Faculty of Public Health and Policy at the London School of Hygiene and Tropical Medicine. His background is in international politics and qualitative social science research methodologies, with a particular focus on the relationship between Britain and the European Union. His current research focuses on the role of corporate actors and scientific evidence in health policy making. 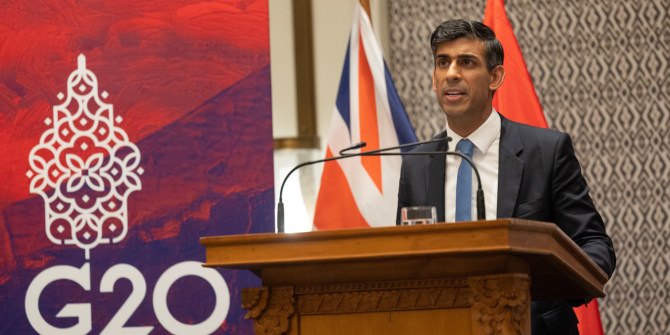 After the G20 Summit: UK responses to a new balance of power