The deputy Mayor in charge of London’s police authority and Scotland Yard’s high command have both repeatedly claimed that nobody could have foreseen that an initial protest over the shooting dead of a black suspect in Tottenham would mushroom into a riot situation. However, Chris Gilson finds that recent history should have provided plenty of pointers to how deaths at police hands or in police custody can often act as triggers for wider outbreaks of lawlessness.

The philosopher George Friedrich Hegel once despairingly remarked: ‘What experience and history teach us is this – that people and governments have never learned anything from history, or acted on principles deduced from it’. This quote certainly seems applicable to events in Tottenham on Saturday evening (6 August) when the London police faced an initially small protest over the shooting of a 29 year old man (Mark Duggan) by armed police two days earlier.

From the start, doubts were quickly raised over the circumstances in which Duggan was killed. Yet there were no senior officers available at the time of the initial protest to answer the many queries and issues of the crowd of family, friends and supporters, who were unhappy at the lack of communication about how Mr Duggan died. Subsequently confrontations developed between elements of the crowd and local police, which then quickly morphed into rioting. The long delays in Scotland Yard subsequently responding to this situation suggested vulnerabilities in their capacity to act, which then helped ignite ‘copycat’ rioting in other areas that same night, and in many other areas of London on subsequent nights.

Scotland Yard senior officers defended their response and along with the London deputy-Mayor Kit Malthouse, have repeatedly argued that no one could have foreseen that an initially peaceful protest over a single death at police hands would turn into a riot. Yet there is a long history of the suspicious deaths of ethnic minority people in police custody or at police hands, and sometimes other kinds of ‘heavy-handed’ policing, functioning as triggers for disturbances that morph into large-scale riots. This history stretches all the way back to the urban riots of the mid 1960s in the USA. My first Table here shows commonalities with two well-known more recent incidents.

Most of the tactics used by rioters in Tottenham that the London police found so hard to combat were also strongly foreshadowed in the 2005 French disturbances – especially the arson of cars and odd buildings, and the rapid movements of ‘feral’  youths from one area to another. 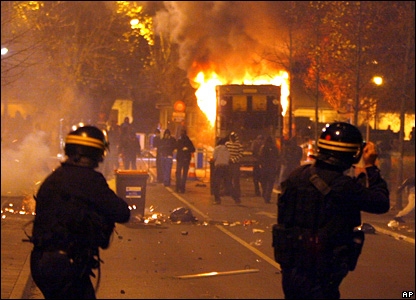 Looking further back in British history, the Metropolitan Police should also have been aware of an apparent ‘electoral-riot’ cycle pattern in the UK that occurred under the last Conservative governments of Margaret Thatcher and John Major. Here severe disturbances broke out in ‘stressed’ urban areas after periods when Tory governments severely squeezed public spending at times of high unemployment, almost invariably during the mid-years between general elections. Again Table 2 shows that the triggers were always incidents that imperil the legitimacy of policing with some sections of local communities.

Table 2: Key events in the electoral/riot cycles during the 1979-97 period

Of course, under the last Labour governments of Tony Blair and Gordon Brown there were strong efforts to improve policy-community relations and to improve social cohesion. All of the riots listed in Table 2 were triggered by the heavy handed policing of young black men, and strenuous efforts at police-community liaison were subsequently made to stop such problems recurring, which for more than a decade seemed to have succeeded. So perhaps the Metropolitan Police felt that this was an era that lay behind them. Yet different warning signs of deteriorating relations with youths in many communities were also evident. And policies such as the abolition of the Educational Maintenance Allowance for 16 to 18 year olds directly affected the urban youth cohort.

However, Table 3 below shows that there have been some deaths at police hands which did not spark unrest or riots, and for which no policemen have yet been convicted in UK courts.

However, even in cases where there was apparently there was no little or no damage to police-community relations, the reputational effects may linger for years. An example was the 2005 ‘execution’ style shooting of the unarmed Jean Charles de Menenzes at close range in Stockwell tube station by Met officers, who mistakenly formed the view that he was a terrorist. A key element in sparking the initial disturbances over Mark Duggan’s death were completely unfounded viral rumours that he too was the subject of an ‘execution style’ shooting – rumours which the Independent Police Complaints Commission only denied after the first riot had occurred.

Finally, it seems beyond coincidence that the past weekend’s riots have come at a bad time for the top command of the Metropolitan Police, some of whose officers were heavily implicated in the recent News of the World phone hacking scandal, clearly raising issues for police governance. Last month saw the resignations of the Commissioner of the Metropolitan police, Sir Paul Stephenson over an expenses issue, and Assistant Commissioner John Yates because of failure to investigate the News of the World scandal. (In October 2008, less than three years before the loss of Stephenson, London mayor Boris Johnson forced out his predecessor as Commissioner, Sir Ian Blair). The Home Secretary Theresa May also announced a review by Her Majesty’s Inspectorate of Constabulary into police corruption and the relationship between police and the media, focusing on the Met.

Add in the absence of all the senior ministers in the government on holiday at the same time, and the extraordinarily reluctant stance of London Mayor Boris Johnson, the PM David Cameron and the Home Secretary Theresa May to end their vacations early, and it seems that the police were not the only decision-makers who seem to have learnt little from past history.

Social media didn’t start the fire: Proposals for the temporary shutdown of social media during riots are unlikely to prevent further unrest

The history of riots in London shows that persistent inequality and injustice is always likely to breed periodic violent uprisings.