National Pay Bargaining: please write to TESCO not the Times

National Pay Bargaining: please write to TESCO not the Times

Alan Manning considers the merits of local wage bargaining and argues that it would cause more problems than it would solve. He maintains that we should be making the existing system work better, not moving to a system that works just fine in an economics textbook but is rejected by the private sector.

On 19 September a long list of very distinguished economists (including some of my LSE colleagues) wrote to the Times suggesting that national pay bargaining in the public sector be abandoned and replaced by individual wage bargaining at local level. This adds to the general criticism of public sector pay determination being made from George Osborne down.

The letter was addressed to the government suggesting it act now to introduce more local negotiation into public sector pay. But the letter could just as well have been addressed to the chief executives of most large private-sector firms such as high-street retailers who are free to choose their system of pay determination and yet do not choose local pay bargaining as envisaged by the letter. In 2011 TESCO agreed a 2.5 per cent national pay rise when surely the letter’s authors think they should have been pursuing a localism agenda.

The pay system these private companies choose does vary but is often of the form of a national pay scale with a relatively small number of supplements for high cost areas. In addition there is a limited amount of discretion given to local managers to use supplements to deal with local recruitment and retention problems. That is they have some local variation in pay but do not achieve this through local wage determination. The system these private-sector employers use is actually very close to the pay structures in the public sector that also uses High Cost Area Supplements and, contrary to apparent widespread belief, there are in most of those systems the ability of local managers to pay local recruitment and retention premia. I think it is a fair comment that the way in which this system is used in the private sector is probably better than in the public sector (we may complain it is hard to recruit nurses and teachers in London but are the queues at the checkout in Waitrose longer?). But it is not the system itself that is at fault, it is the way it’s operated.

Why don’t private sector firms all use local wage bargaining? I think they understand the advantage of tailoring pay to local conditions that is the central idea behind the letter. But they also understand that wage levels are quite similar across many parts of the UK and that local wage determination is extremely costly, that setting wages uses resources and can lead to mistakes. When the authors of the letter ask for local wage bargaining, they are silent on how local. Will every primary school negotiate pay with all of its teachers? I doubt they think that a sensible proposal. So perhaps pay should be determined at local education authority level?

But that also leads to problems. One has to remember that LEAs or NHS trusts have in some parts of the country considerable market power over parts of their workforce who have specialized skills. If the local NHS trust held down nurse pay, many of the nurses would have little choice but to accept that because there are no alternative local employers for their skills. These are not hypothetical fears – this is what happens. In the United States there is a perennial shortage of nurses because each individual employer has an incentive to keep pay low but collectively pay is not high enough to induce people to enter the profession. And in the UK throughout the 1990s the government tried to inject more localism into public sector pay determination along the lines proposed by the letter. For example in 1995 nurses were given a 1 per cent national pay rise but local trusts could add up to 2 per cent extra. The result was not pretty. Through a combination of short-termism, incompetence and naked exploitation, most trusts took advantage of this freedom to pay nothing extra and nurse pay fell relative to median earnings. This was not a fall to the level of wages we would have in a competitive labour market – we ended up with a level of vacancies in the NHS more like that to be found in McDonalds yet trusts refused to raise wages to deal with the problem. Eventually the localism agenda had to be abandoned, there was a return to national pay determination and a sizeable pay rise for nurses as can be seen in the figure below. 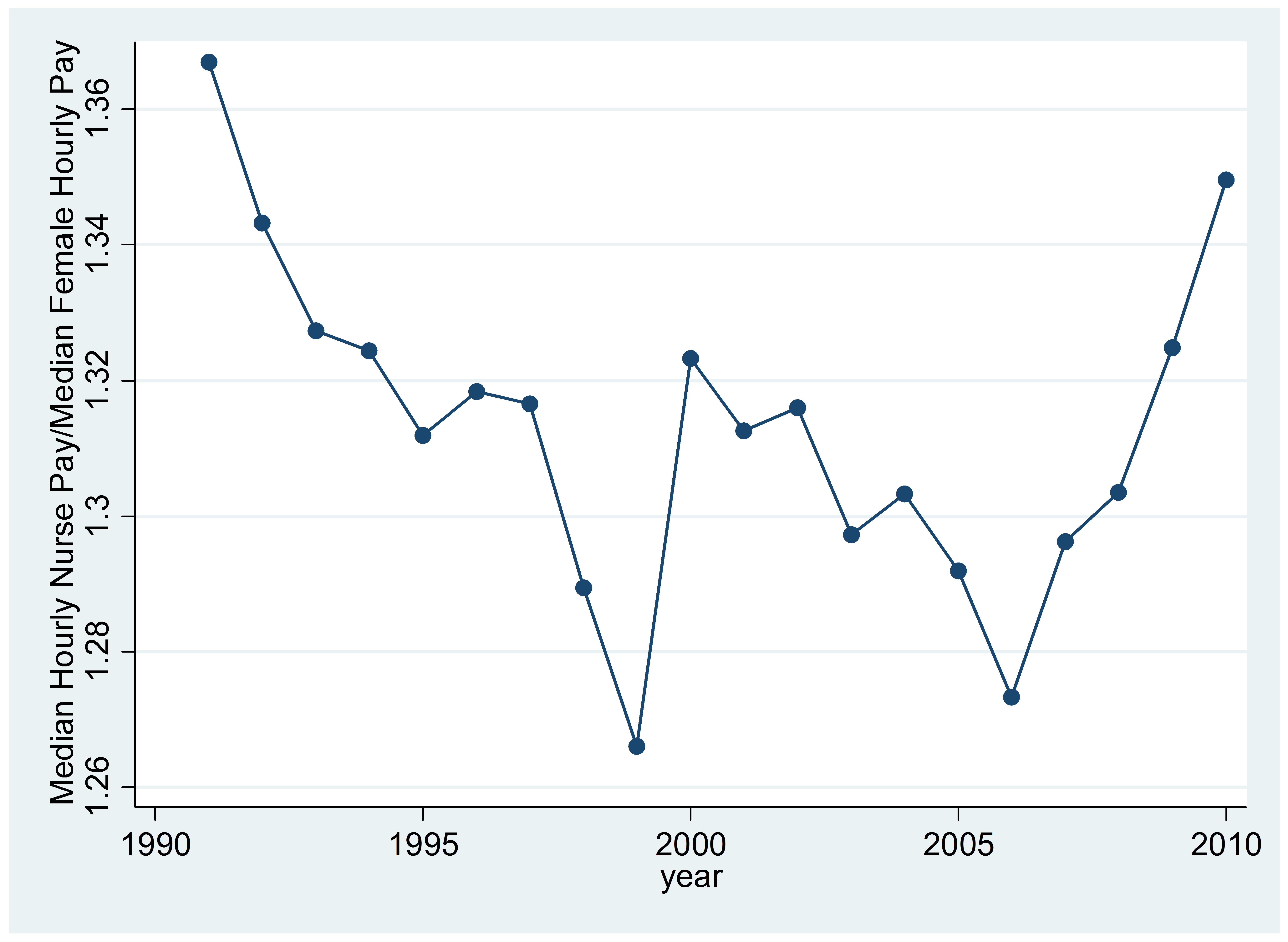 There are already worrying signs that public-sector employers may be up to their old tricks again. A number of NHS trusts in the South-West have joined together in the SW Pay, Terms and Conditions Consortium to try to take a joint approach to pay issues. At the time of writing it remains very unclear what will be the outcome of this but if all the sellers of baked beans in the south-west got together to discuss pricing they would rightly be prosecuted under the competition laws. In contrast employer collusion to determine pay is regarded as a positive move in many quarters.

So we have good reason to think that a forced move to local pay bargaining would cause more problems than it would solve. But this is not to say that the current system is without its problems.

As the figure shows, National pay determination has led to excessive volatility in public sector pay as it has been an attractive option for cash-strapped governments to hold down public sector pay but this stores up problems for the future requiring an eventual large correction (I should add that I am a supporter of the current public sector pay squeeze). It does seem difficult within the framework of the current system to induce sufficient regional variation in pay, it does seem difficult to get local employers to take advantage of the discretion they do have.

I was a member of the NHS Pay Review Body from 2004 to 2011 and I do regret not pushing for a higher London allowance. I don’t think it would have made any difference as there was very little interest in that agenda from others but I do think I should have tried because, as work from my colleague John van Reenen (a signatory of the letter) and others has shown the consequence of nurse pay in London being too low is that death rates are higher. But we should be making the existing system work better, not moving to a system that works just fine in an economics textbook but is rejected by the private sector and when it has been forced on the public sector in the past has led to such obvious problems.

Alan Manning is head of the Department of Economics and director of the Labour Markets Programme at LSE’s Centre for Economic Performance. His principal research interests are labour markets, unemployment, minimum wages, and monopsony (the market situation in which there is only one buyer). Professor Manning is the author of Monopsony in Motion: imperfect competition in labor markets (Princeton University Press, 2005). He is a member of the National Health Service Pay Review Body.