Aftermath of the Financial Crisis: New Challenges for the Left

Aftermath of the Financial Crisis: New Challenges for the Left

Sacha Garben, Hanaan Marwah, Luke McDonagh, Berkay Ozcan, & Thomas Sampson argue that there are three main priorities the political-Left should be focused on in the aftermath of the financial crisis: they must produce new ideas if they are to supplant neo-liberal ideology, properly express their aims in order to effectively communicate with the electorate, and focus on organising capital rather than labour.

The financial crisis which erupted in 2008, coupled with the on-going global economic malaise which followed, demonstrate the limitations of free market ideology. This has opened the door for new ideas, and it is important that the Left takes advantage of this. In this respect it is our view that there ought to be three main priorities for the Left.

The first challenge concerns the need for investment in thought. It is often said that post-1960s, the Right largely won the economic argument, facilitating the turn towards free market extremism which began during the late 1970s and 1980s, while the Left largely won the cultural argument, breaking down legal and cultural barriers with regard to issues of civil rights, in particular women’s rights, the rights of ethnic minorities and gay rights. It is interesting to recall that many of the great victories of the Left during this era came about via street politics. In the US for example the great civil rights marches and the Stonewall protest riots come to mind, as do the mass marches against the far-right National Front which took place in the UK during the 1970s and 1980s.

At the same time, it is clear that a grand failing of leftwing political thought of the past 30 years has been in the field of ideas, and it is this which ultimately explains the Left’s lack of success in the economic field during this time. As John Roemer has stated, during the 1970s the political right took theory seriously and funded centres at major universities and invested heavily in right-leaning think tanks such as the Cato Institute, Manhattan Institute and Heritage Foundation. The resulting doctrine of neo-liberalism has paid great dividends for the Right, while simultaneously providing politicians with a clear language, steeped in terms of individual political and economic freedom, with which to engage the public. No comparative intellectual movement on the Left has emerged during this same time.

Given that the Left’s major victories of the past decades have come from protests, it is surely no coincidence that the first instinct of those who oppose the current economic system is to get out on the streets – the Occupy movement is merely the latest incidence of this occurring. Nonetheless, protest movements tend to burn brightly and fade quickly in the public consciousness, leaving behind catchy slogans such as ‘We are the 99 per cent’, but failing to build up the detailed ideas and institutions necessary for sustained political engagement. Without a serious investment in intellectual thought, similar to the one funded by the Right in the 1970s, it is unlikely that a serious ideological alternative capable of engaging the public can emerge. This requires investment in broad, ambitious and interdisciplinary research teams and centres.

This leads to the second great challenge – the ability of the Left to properly express its aims. At present, part of the great ideological opportunity for the Left is to create a language which is capable of articulating the goals of social justice and the values of human rights, yet is also capable of challenging the current economic consensus in a serious, rigorous fashion. This is particularly important following the ‘third way’ era of the 1990s and early 2000s when the Centre-Left parties in the US and the UK consciously adopted the language of neo-liberalism. In many areas the law now enshrines ‘formal equality’, while politicians commonly speak of ‘level playing fields’ and ‘equal opportunities’ instead of focusing on outcomes. The recent economic collapse has in any event exposed the limitations of the current model – even ‘New Labour’ idealist Peter Mandelson recently admitted that the Labour Party had been wrong to be “intensely relaxed about people getting filthy rich as long as they pay their taxes”.

In forming a new language, the Left should be unafraid to assert that the language of individual, meritocratic liberalism does not represent the end of history. The mass bank bail-out of 2008 demonstrated that the state has a crucial and unique role to play in regulating and co-ordinating the economy. Furthermore, in areas where liberal privatisation has come at a great cost to the public, such as the privatisation of the railways in the UK or the privatization of roads and parking meters, the Left must be unafraid to engage with economic language and methods in order to illustrate the fact that liberalism does not always produce the most efficient or fair outcome. In particular, the Left must build a new language in order to take on the arguments of economic libertarianism, which represent the extremist end of the political right’s anti-government, pro-individualism stance. The Right’s great achievement was to take a body of academic literature and translate it into language that was widely understood and easy to use. In the aftermath of the crisis there is a large body of work on why, when and how markets fail. It is this literature that the Left needs to popularize.

The third challenge concerns the political realm. While unions in the developing world are emerging as a vital, radical force for change, in the developed world merely looking to the labour movement for solutions to the current economic malaise seems unlikely to pay off. True, this has not always been the case. Michael Kazin has described how the radical and socialist elements of the labour movement were highly influential in the wide ranging economic reforms enacted by Roosevelt during and after the great depression in the US. Similarly, in the UK the nationalisation of industries and the health service in post-war Britain were policies strongly advocated and supported by the unions.

However, the potential for the US and UK labour movements to play a transformative role in politics appears to have been exhausted. For example, in the UK, last November’s mass public sector strike ultimately failed to cause either mass disruption of services or a policy change by government. Earlier this year in the US, the attempt to recall Scott Walker, the union-busting governor of Wisconsin, was defeated soundly at the polls. Indeed, given the current historic low levels of union membership outside of the public sector, it is difficult not to conclude that the labour movement is no longer the radicalising and effective political force it once was in the US and the UK.

To admit this is not to deny the historical achievements of the labour movement, which are undeniable, nor is it to condemn the movement to irrelevance. It is likely that the labour movements in the US and the UK, with their historic and powerful influences on the Democratic and Labour parties, will still be able to exercise considerable political power in the coming decades. But this power is increasingly insular and limited to dealing with issues concerning their own memberships.

In light of this, in the 21st century economies of the US and the UK, it may be worthwhile to focus on ways of ‘organising capital’, not labour. Many people, even those who are politically active or members of unions, generally feel relatively powerless when it comes to issues concerning money. In the same way that workers in factories in the late 19th century had to be convinced that there was power in the organisation of their labour, convincing the public that there is political power in ‘organised capital’ could provide the left with greater leverage to negotiate policy with government and big business. There is little doubt that the richest 1 per cent is able to exercise disproportionate political power precisely because they control vast amounts of capital. Given the fact that the 99 per cent also control vast amounts of capital, but in a disorganised sense, there may be hidden political resources at the Left’s disposal.

Eliot Spitzer recognised this in late 2011 when he stated ‘we own Wall St.’. He noted the untapped political value of the fact that the 1 per cent can enjoy their wealth within the current system only while the system relies upon the liquidity provided by our wages flowing through banks every week, as well as the strategic importance of our mortgages, pension funds, and mutual funds. Recent indications show that people are starting to become more active in the control of their own capital – this can be seen in the UK with the recent shareholder revolts over executive pay at under-performing companies and the increasing numbers of Barclays, Royal Bank of Scotland and Lloyd’s customers switching to the Co-op Bank. These awakenings are to be welcomed, as are recent web initiatives such as ‘www.moveyourmoney.org’. Indeed, if these currents develop into a political movement, ‘organised capital’ could, alongside the existing labour movement, help to provide more impetus for enacting political and socio-economic change.

Overall, it is notable that the three above challenges are interlinked. Without proper investment in interdisciplinary research bases, it is unlikely an alternative to the language of neo-liberalism can be found. Activism without a clear ideology threatens to go nowhere, while engaging with the realm of capital may be the best way to breed successful activism. It is the instinct of the democratic left to believe that while all three challenges are formidable, they are not insurmountable.

Sacha Garben is fellow in the Department of Law at the LSE.

Dr Hanaan Marwah is Teaching Fellow in Economic History at the LSE.

Dr Berkay Ozcan is Assistant Professor (Lecturer) at the Department of Social Policy at the LSE.

Dr Luke McDonagh is LSE Fellow in the Department of Law.

Dr Thomas Sampson is lecturer in Economics at the LSE. 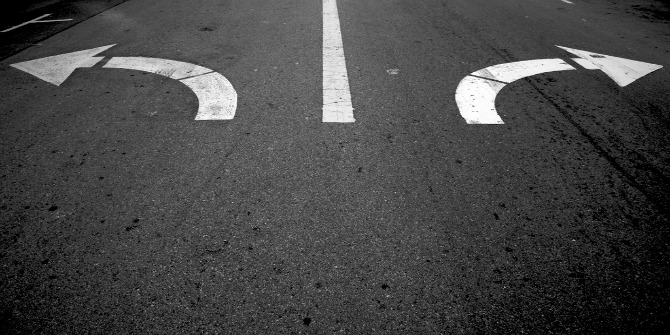 Many direct impacts of the Olympics are already positive, not least that the follow-through is actually happening