How well does the public understand the roll out of the new state pension and how it will impact them? Kirby Swales draws on joint NatCen and Pensions Policy Institute research to explain that there is a general lack of awareness which, unless addressed, can lead to financial hardship for people in the future.

The State Pension is not the most topical subject in policy research circles, but it is hugely important. It is the single largest item of social security expenditure – about £92bn at the last count. It is the largest source of income in retirement. However, people are yet to realise the importance of the new State Pension and the changes it will bring, according to new research.

You will have probably heard about the change in State Pension age, especially for women aged 60-64. However, there have been really significant other changes in recent years – including eligibility rules, amounts and particularly the removal of additional, earnings-related components (think SERPS, State Second Pension and so on).  The new State Pension will provide a flat rate level of income for all individual adults – currently £8,500 for those with a full contribution record. The new state pension was created to simplify the whole system but also make it more re-distributive, and to improve affordability. The system is now rolling through and each newly retired person will receive it. Currently this is just over 400,000 people.

NatCen has been working with the Pensions Policy Institute (PPI) to help understand the level of understanding of the new State Pension. The briefing note from PPI shows clearly that understanding is patchy, and this backs up previous research. New data from the NatCen Panel shows that the youngest people, not surprisingly, have the least knowledge. Moreover, it is estimated that three in ten of those approaching retirement don’t know that they will receive a State Pension when they are older than they expect. About one in five young people don’t expect to get a State Pension at all (see Figure 1). 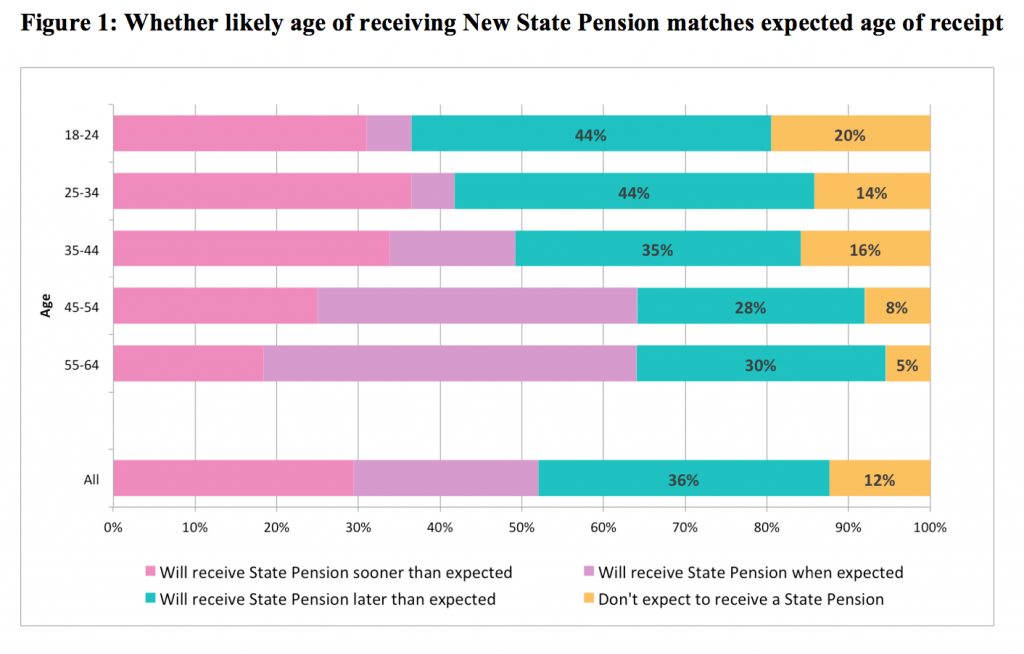 So it seems the new system has not led to a major shift in understanding (and any resulting behavioural change) yet. This raises two questions – i) does it matter and ii) how can it be improved? There are alternative perspectives on the answer to the first question. If people are becoming eligible and also in a workplace pension, then there are no choices that they are not exercising. However, it will matter to those more at risk, such as those approaching retirement soon, or people with intermittent working or caring histories. (You need 35 years of these to get a full State Pension).

On the second question, there is clearly more consensus for action. There are lots of practical ways for how people could be more engaged in the State Pension. It is already possible to check National Insurance records online but a more sophisticated pensions ‘dashboard’ is on the way. This could have a big impact but only if people know about it and use it. Could targeted e-mail and hard copy communications play a role?  Could the state pension update be provided as part of mid-life career checks (a bit like what is happening with the NHS midlife health check)?

So, it really appears we are at the beginning of a journey where the country starts to appreciate the changes made. As well as supporting individuals’ retirement planning, it will have a significant impact on society  –  the new State Pension acts as a sort of universal basic income for the majority of the older population. This research was intended to help stimulate initial discussion, and there is definitely scope for more regular and deeper insight. Getting people to understand the new State Pension at an individual and societal level would have a lasting positive impact.

Kirby Swales is Director of Survey Research Centre at the National Centre for Social Research.