The presentation of data on NHS expenditure is flawed, writes David Rowland, which prevents policymakers from having a clear understanding of where money within the system is going. He estimates that in 2018/19, the amount spent by NHS England on the independent sector was around 26% of total expenditure, not 7% as widely reported.

Claims regarding the extent of NHS ‘privatisation’ ought to be easily settled by referring to the official data contained within the Department of Health and Social Care’s (DHSC) annual report and accounts. These accounts, which set out how much is spent by the NHS in England in the independent sector have nonetheless been inconsistent and difficult to interpret. Following a comprehensive review of six years of these accounts our view is that the presentation of this data is seriously flawed and requires revision.

The settled view in the media is that around 7% of NHS expenditure is spent by the NHS in the independent sector to purchase healthcare for patients. The source of the 7% figure is a table which has been included in the Department’s annual report and accounts each year since 2014-15, which details all expenditure on healthcare provided by ‘non-NHS bodies’. A combined version of all the entries contained within these tables is set out in Table 1 below.

According to this table, in 2018-19 around 7% of total NHS expenditure goes on ‘private providers’ and this figure has remained remarkably stable over the course of a six-year period. Whilst the table includes data relating to expenditure on the voluntary sector and payments to local authorities and to the devolved administrations, the 7% figure is arrived at by excluding any money paid to any of these types of recipients.

However, there are a number of serious flaws with this presentation. The first is that the distinction between expenditure on non-NHS healthcare in the ‘independent sector’, the ‘voluntary sector’, the ‘private sector’, and ‘local authorities’ does not stack up and on this basis there is no reason for the DHSC to exclude payments to either local authorities or to the voluntary sector from their calculations. This is for the following three reasons.

First, when asked to provide a definition in Parliament of the ‘independent sector’ for the purposes of these accounts, the government was unable to do so. Instead, it provided examples of the types of companies which fall into this category which range from small nursing homes to large multi-national private hospitals.

Second, the payments made by the NHS to local authorities worth £2.8bn last year are in fact payments which end up in the independent sector. A Freedom of Information Act response provided by the DHSC in August 2019 confirmed that the purpose of these payments was so that local authorities could commission nursing care and social care (known as either Funded Nursing Care or Continuing Health Care) almost all of which is provided by the independent sector.

Third, the definition of voluntary sector when it comes to healthcare is not, in fact, a distinct business sector. Indeed, some of the major ‘private’ providers of healthcare– such as BUPA and Nuffield Health – are not-for-profit companies; in the care home sector, the not-for-profit companies often turn a relatively healthy profit. Similarly, a large number of all private hospitals are also registered as charities.

Major items of expenditure on the private sector which are detailed in the accounts are excluded from the DHSC’s calculations.

The second item which is excluded is expenditure by NHS England from its central budget on primary care services, which in total amounted to £14 billion in 2018/19.  Yet, most NHS primary care services are provided by the independent sector in one form or another, whether these are the high street pharmacy services provided by Boots or Lloyds Pharmacy, optical services provided by Specsavers or Vision Express, or dental or General Practice services delivered by independent contractors to the NHS.

Whilst there is a genuine debate to be had as to whether or not the provision of General Practice falls within the definition of the independent sector given that they derive almost all their income from the NHS it is odd not to categorise companies like Specsavers or Boots as independent sector providers.

The final major flaw with the presentation of the data in the table is that it calculates expenditure on the private sector as a percentage of the total budget available to the DHSC rather than the NHS. Yet the total DHSC budget contains funds for items in addition to the NHS, such as paying for regulatory bodies and running the Department itself. Using this much larger figure has the effect of making the total spend in the independent sector look smaller as a percentage of overall expenditure. Instead, the correct denominator here should be the actual total expenditure by NHS England each year. This is because NHS England cannot spend money on the private sector which is not available to it.

The correct presentation of the data

In order to correct these flaws, we have put together a presentation of the data contained within the DHSC accounts which we believe captures more accurately the global expenditure by the NHS on the independent sector between 2013/14 and 2018/2019. 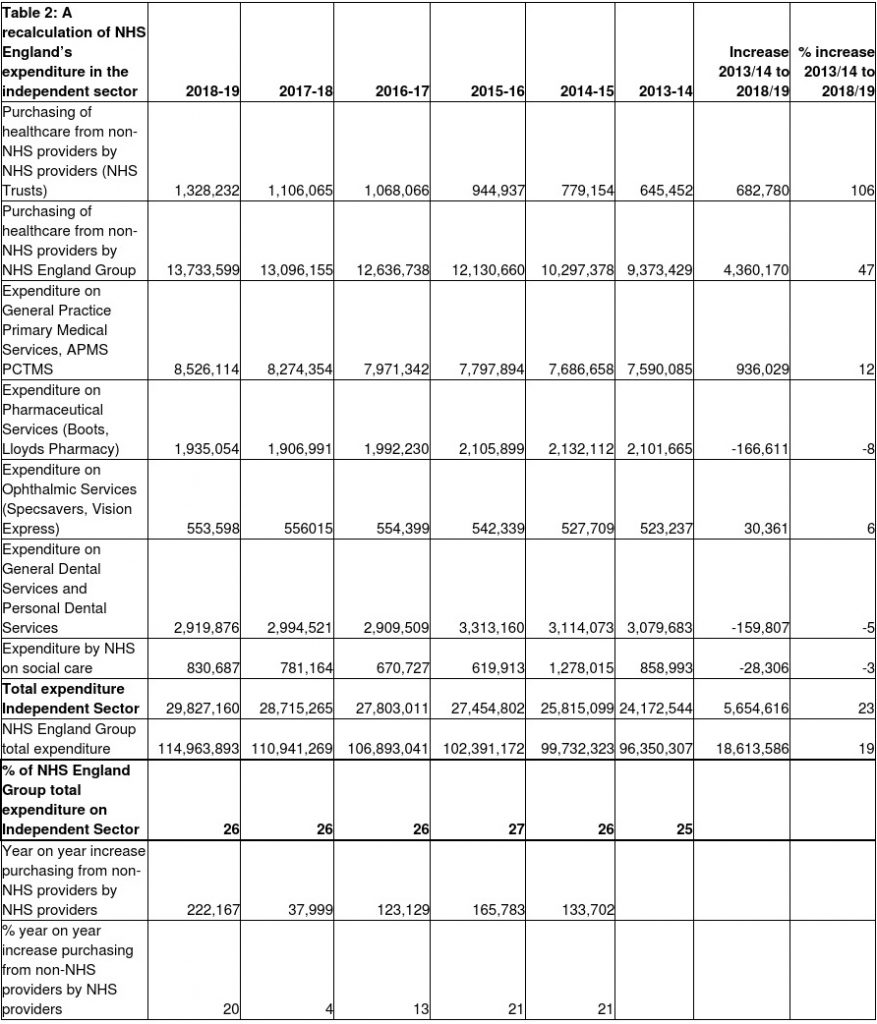 It is important to have a reliable estimate of annual expenditure by the NHS in the independent sector so that policymakers can those businesses and organisations which provide publicly funded healthcare to account. Our earlier research estimated that there were around 53,000 individual contracts which underpin flow of money between the NHS and the independent sector. We now estimate that these 53,000 contracts are worth £29 billion each year.

A correct presentation of expenditure also allows the media and parliamentarians to have a clear understanding of where money within the NHS system is going and the trends that are taking place. If these facts are hidden within the accounts, it limits a broader understanding of the nature of healthcare provision in England. Healthcare in England is now very much less directly provided by the NHS than most people think.