A research report released earlier this week by Christian Dustmann and Tommaso Frattini found that recent immigrants have provided a consistently positive and astonishingly strong contribution to the UK’s fiscal health (you can see a summary of their report published on this blog). Subsequently, the findings have come under fire with suggestions that there are things ‘hidden’ in the report. Here, they address the criticisms point by point.

Two pieces on the Telegraph blog criticise our recent report on the fiscal impact of immigration to the UK. The first by Tim Wigmore suggests that the press release summarising our report only highlights the positive effect of recent immigration to the public purse, while ‘hiding’ the fiscal cost represented by earlier non-European immigrants. He says that it is not ‘OK for a report to whitewash out inconvenient facts’.

In the report, we compute the fiscal net contribution for two immigrant populations: first, all those who arrived after 1999; and second, all those immigrants who lived in the UK between 1995 and 2011, whenever they arrived. In both cases, we distinguish between immigrants from the European Economic Area (EEA) and non-EEA immigrants. The press release focuses on the first population because recent debate has been about the fiscal impact of immigrants who arrived over the last decade, many of them from Eastern Europe. But the paper also reports results for all immigrants who reside in the UK in each year between 1995 and 2011.

As to Mr Wigmore’s criticism, we first note that if we had wanted to ‘hide’ numbers relating to all immigrants who resided in the UK between 1995 and 2011, we would not have put them in the report in the first place. We could easily have written a report that dealt exclusively with recent immigrants. And these numbers are not ‘hidden away’ in the report – in fact, they are not only shown in the Table 5 Mr Wigmore refers to, but also, and broken down by years, in Table 4a and in Figures 1a and 1b, which features on the BBC website for everybody to see.

As for the findings for the non-EEA immigrants who resided in the UK between 1995 and 2011, the fact that their average contribution is negative just means that they are similar to the native British-born. This is as much a reflection of the fact that the exercise is being conducted for a period of overall budget deficit, when the average contribution must be negative, as it is of anything distinctive about their fiscal contribution. The fact on which we focused is the noteworthy one that a particular group of immigrants (EEA-immigrants) are net contributors even when there is an overall deficit.

Further, the deficit that we attribute to older non-EEA immigrants is likely to be significantly overstated because we are taking a very cautious approach. This group has large numbers of UK-born second generation children and the cost of educating them is counted as a cost associated with the ‘Immigrant’ group even though, for data reasons, we cannot include grown children’s tax payments as benefits to set against that. Thus, this contributes to understating immigrant contributions.

The piece by Douglas Carswell MP raises a number of methodological points relating to our study and suggests that some points are intentionally not made clear. He then challenges some of our conclusions.

We first note that – precisely because we very clearly lay out how every single number is constructed, as is good academic practice – Mr Carswell is actually able to try to ‘deconstruct what the experts say’. Precisely because we do not want people to believe experts’ opinions as if they were true by definition, we have clearly detailed how we have apportioned each item of government receipt and expenditure.

Our study uses the best data available to reach conclusions on the fiscal impact of recent immigration. But even those data are not perfect, and as in every such analysis, some assumptions have to be made when using them to compute the fiscal net contribution of population groups.

As to the first point Mr Carswell raises, that we are misallocating business rates as we allocate their revenue based on self-employment shares: this method is well-established in the research literature predating our work; it is not an unreasonable criterion to use; and any other criterion would be more arbitrary. In any case, business rates account for about 4% of total revenues, so changes in the apportioning coefficient will certainly not ‘massively distort the balance sheet’ as Mr Carswell claims.

As regards Mr Carswell’s other points: the allocation of company and capital taxes accounts for the fact that a substantial fraction of UK companies is owned by non-resident shareholders. After removing their estimated payments, we allocate the remaining revenues on a per capita basis to the resident population. We clearly explain the assumption that we are making in choosing our apportioning criterion. Again, we do not believe other assumptions are more justified or better grounded.

We use data from the UK Labour Force Survey (LFS) in our study. This is a large representative survey of the UK population, which provides the most comprehensive data available and over a long period of time. The DWP data to which Mr Carswell refers are not as complete (they start in 2002), and using them to study the welfare take-up of immigrants requires a number of (potentially questionable) assumptions, as the author of that report correctly points out, since immigrant status is not recorded. Moreover, the report to which Mr Carswell refers does not distinguish between different groups of immigrants, as we do.

Further, Mr Carswell’s claim (in point 4) that we mix together all benefits in our analysis of the fiscal contribution is simply untrue. In fact, we know from the LFS who is receiving what type of benefit, and we use that information to allocate the cost of each benefit (as we detail in Table A1).

Finally, on Mr Carswell’s point 5, although it may be true that different immigrant groups have different claiming patterns, this is not at all a concern for our analysis, as we are looking at broad groups of individuals, and we effectively consider average behaviour across national groups, within the groups we define (EEA and non-EEA). Thus, even if we would distinguish between immigrants from Poland, Estonia, etc. when assigning benefit receipts, by aggregating them up to larger groups, this distinction would be averaged away. Therefore, Mr Carswell’s claim that this aspect of our methodology ‘undermine(s) the claim that European Economic Area migrants contribute 34 percent more in taxes than they receive in benefits’ is simply incorrect.

Although both of these pieces base their critiques on the suggestion that there are things hidden in the report, the ease with which each has identified the facts which have interested them shows that our report is on the contrary unusually open about how its figures are arrived at. And contrary to the impression that might be given by these two pieces, we have at all points leaned towards conclusions that understate immigrants’ contributions. We disagree with some of the interpretations on which these critiques are based, but welcome any fair-minded discussion of the reasonableness of the procedures we adopt.

Christian Dustmann is Professor of Economics at University College London, Director of CReAM  – Centre for Research and Analysis on Migration, and Scientific Director of the NORFACE Research Programme on Migration.

Tommaso Frattini is Assistant Professor at the Department of Economics, Management and Quantitative Methods (DEMM) of the University of Milan. 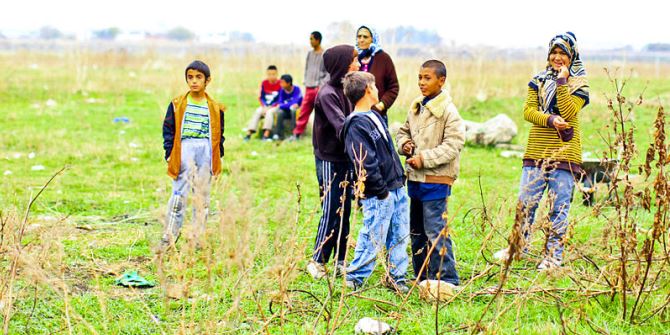