Chancellor George Osborne is set to announce “credit easing” measures in his Autumn Statement, aimed at getting banks to lend on more affordable terms and in greater volume to under-served segments of the economy. Charles Goodhart OBE FBA and Morgan Stanley’s Jonathan Ashworth believe  ‘quasi-fiscal’ policies could provide a larger and more sustained boost to the economy, particularly when focused on small and medium-sized enterprises, historically a key driver of job creation.

In October we highlighted a number of reasons why we were less optimistic than the Bank of England (BoE) about the likely impact another round of quantitative easing (in the form of gilt purchases) would have on the economy. We felt that policies to reduce the elevated lending spread of household and corporate borrowing rates over the BoE base rate and to increase the provision of credit to under-served segments (e.g., Small and Medium-sized Enterprises or SMEs) could provide a more substantial boost to the economy.

As Figure 1 shows, banks’ funding costs have risen sharply over recent months (amid a large increase in their Credit Default Swap spreads) and it seems increasingly likely that this will be reflected in yet higher borrowing costs for firms and households (and tighter lending standards). 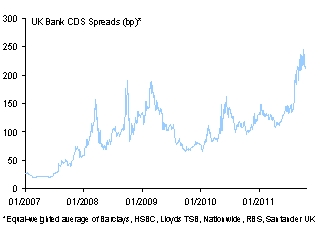 Amid growing criticism that the government lacked a credible growth plan, Chancellor George Osborne indicated in his speech at the Conservative Annual Conference the government’s willingness to take the lead, with “credit easing” measures to be announced in the Autumn Statement on November 29. While being light on specifics, he suggested that the aim was “to inject money directly into parts of the economy that need it such as small business” and that “It’s similar to the National Loan Guarantee Scheme (NLGS) we talked about in opposition”. The NLGS was first proposed by David Cameron in November 2008, where the government would initially guarantee £50 billion of new corporate lending by the banks (particularly short-term credit lines, overdrafts and trade credit) for a commercial insurance fee.

Since the onset of the financial crisis there has been a sharp contraction in bank lending across most developed economies. Figure 2 highlights how, after a decade of abundant credit, borrowing by the private sector in the UK collapsed in 2008 and has continued to contract in the non-financial corporate sector. That said, the aggregate numbers mask significant differences by firm size. Large firms continue to have access to relatively inexpensive credit, while SMEs and business start-ups have generally found it difficult to borrow. 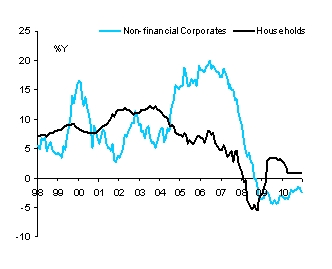 The expansion of SMEs and the creation of new firms are vital to the recovery of employment and the wider economy. While the BoE often highlights that large businesses account for the vast majority of total investment, the relative importance of SMEs is much greater when it comes to the labour market. Indeed, since June 2001 SMEs (typically defined as firms with less than 250 employees) have on average accounted for 41% of labour market vacancies.

To date, various policy measures have been unsuccessful in restoring the flow of credit. Much fanfare was made particularly about Project Merlin, an agreement in February between the government and the major high street banks, where the latter agreed to lend £190 billion to businesses during 2011, including £76 billion to small firms. Since the agreement, however, the overall stock of lending to private non-financial corporates has actually contracted. In future, theoretically there are two main routes through which the government could proceed to restore the flow of credit to SMEs: either circumvent the banking sector by creating a public sector bank or work through the existing banks – reducing their funding costs and increasing their incentives/willingness to lend.

Adam Posen recommended that the government create a public bank to lend to SMEs, similar to the Small Business Administration in the US and the German Kreditanstalt Fuer Wiederaufbau (KFW). We think it highly unlikely that the government will go down the public bank route at the present time. Government members (primarily Conservatives while in opposition) have tended to stress that policies to boost lending should be done via the banks, based on market incentives and with the government sharing some (but not all) of the credit risk. Indeed, there would be a likelihood that a public bank would end up with all the low-quality loans, those applicants who had been rejected on commercial grounds.

Perhaps more important, setting up a public bank would be a very time-consuming process and hence it is unlikely to be able to help the economy when it really needs it. The possibility of setting up a public bank to lend to SMEs could be kept as a background threat, to try and coerce the high street banks to raise their lending. That said, with the government holding an 84% controlling stake in RBS, it would probably make more sense to use this as a vehicle to increase competition and force an increase in lending if it felt necessary.

Posen also recommended creating an institution that would purchase SME loans from banks and then bundle them together and sell them to investors – a better version of Fannie Mae and Freddie Mac in the US (he suggested Fannie and Freddie only got into trouble when they were allowed to hold mortgages on their own books). This would create a deeper and more liquid market for these illiquid securities, which banks would then be able to sell off their balance sheets. Once again it would take time to set it up, although the knowledge of the creation of such an institution would probably be enough to spur some current SME lending. Meanwhile, the initial equity for such an institution could be provided by the government, while the main funding could come from the BoE and the government could instruct the BoE to act as Market Maker of Last Resort in order to help get the market up and running.

One way to attempt to reduce banks’ funding costs and hence reduce lending rates to SMEs (and other borrowers) would be for the government to restart the Credit Guarantee Scheme (CGS) or instruct the BoE to relaunch the Special Liquidity Scheme (SLS). In the CGS, the government committed to guaranteeing almost £250 billion of borrowing by financial institutions, as it was becoming increasingly difficult to raise funds in term funding markets. The scheme closed to new issuance in February 2010. Meanwhile, in the SLS, the BoE allowed financial institutions to exchange less liquid assets for gilts over a long maturity (up to one year). The scheme ends in January and while banks have access to the Discount Window Facility, lending here is much more short-term and more expensive.

It would not be totally surprising, if the government were to consider opening up these schemes again or maybe a ‘lite’ version of either. These measures would undoubtedly reduce the cost at which banks could raise funds and (if temporary) they would be classified as contingent liabilities and would have no impact on public sector net borrowing and debt figures (unless there were banks that defaulted and losses were crystallised). The main problem with this though, like many other measures taken over recent years, is that it may help the banks without necessarily making them increase their lending levels.

The government could instruct the BoE to purchase bonds issued by banks. We estimate the market size for financial bonds to be about £140 billion currently, £110 billion excluding insurance companies. This would almost certainly reduce the cost of raising funds for banks, although once again it comes down to, will banks pass on their lower funding costs to borrowers?

Previously, the BoE purchased about £1.5 billion of non-financial corporate bonds, in order to improve liquidity in this market and, hence, reduce the cost of funding to large corporates. It is unlikely to repeat this, as Governor King recently noted that the cost of borrowing for large corporates is less than for banks.

The NLGS proposed by David Cameron in 2008 would have government guarantee new corporate lending by the banks for a commercial insurance fee. George Osborne provided details of the plan in January 2009. He suggested that the government should guarantee some portion of bank loans made to SMEs, up to £50 billion initially, and that these guarantees would be similar to those used in the CGS. He recommended that the government-guaranteed loans should be able to be used as collateral at the BoE’s liquidity facilities and the guaranteed portion of the loan should be zero-weighted for the purposes of risk analysis. Moreover, he suggested that, as with the CGS, this would not add to government borrowing.

We think there is a reasonable likelihood of such a scheme being implemented. Here, potentially reducing the level of capital they would need to hold and put at risk should (possibly in conjunction with other policies) spur the banks to increase lending to SMEs. Meanwhile, further incentives could also be attached in order to get banks lending. Business Secretary Vince Cable has recently suggested using the tax system to punish banks that do not increase their lending to SMEs. The government could try and entice banks to lend by reducing the levy on bank assets of those institutions that meet specified lending targets. The loss in tax revenue could be recouped by raising the levy on those failing to meet their targets.

Obviously, taking measures to try and incentivise banks to lend/reduce their lending costs is fraught with political risks, as the opposition would likely raise the charge that the government is more interested in helping rich bankers than ordinary people. However, over the term of the current parliament to 2015, the government would likely think it is worth taking some short-term flak if its policies are to help generate a sustainable recovery going into the next election. 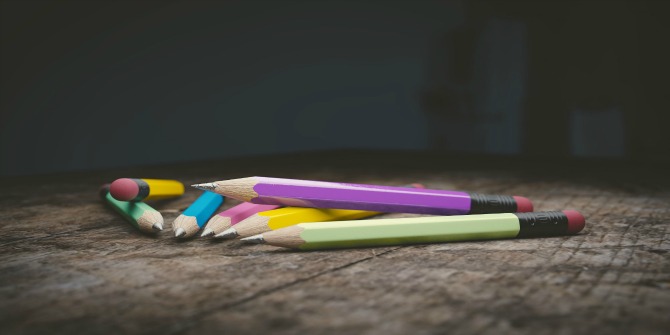