Why does the government get defeated so often in immigration cases? Matt Williams explains that the language used in relevant legislation has been increasingly unclear, leaving it up to judges to debate the meaning and intention of policy.

Political scientists struggle to explain (and predict) how judges decide cases. This task is no more pressing than with regard to the hottest of topics. In Britain, immigration has topped the list of most litigated areas of public policy for as long as detailed statistics have been available. And immigration has had extraordinary political impact. So, my aim in a recent paper was to try and explain the increased rate of government defeat in immigration cases. Specifically, from 1970 to the end of 1994, the government fought 78 immigration cases at a senior appeal court (Court of Appeal/ House of Lords) and was defeated 25 times. In just 17 succeeding years, up to 2012 (now including the UK Supreme Court), there were 174 appeal cases and 90 government defeats.

The government and some media outlets have suggested this changing behaviour was a function of judges’ own preferences, increased immigration, and the Human Rights Act 1998 (HRA). The latter has drawn especial criticism, with its protections for, amongst other things, immigrants’ private and family lives. Amidst broader demands for ‘taking back control’ of borders, the HRA, bundled in with membership of the EU, has been seen as an unacceptable dilution of Parliament’s sovereignty.

But, I wanted to consider what, exactly, ‘control’ even means with regard to borders and sovereignty. Control in any democracy begins with control of discourse. Instructions passed between institutions must be clear, and executable. I hypothesised that quite the reverse has happened in the UK. Despite its sovereignty, Parliament has been enacting more law of greater linguistic indeterminacy. And, as a result, judges were forced to use other rules of law to make sense of it all. Judges’ increased policy role, such as it is, has been a function of problems in the law.

Let me give some examples of plain and indeterminate legislation. Plainness is exemplified by section 1 of the British Nationality Act 1948:

Every person who under this Act is a citizen of the United Kingdom… shall by virtue of that citizenship have the status of a British subject.

Despite my abridgement, this section is short, unqualified, and offers a complete instruction. Contrast this with the dominant deportation tool, still used to this day, from section 3 of the Immigration Act 1971:

(5) A person who is not a British citizen is liable to deportation… (a) if, having only a limited leave to enter or remain, he does not observe a condition attached to the leave or remains beyond the time limited by the leave; or (b) if the Secretary of State deems his deportation to be conducive to the public good…

This section contains multiple conditional conjunctions (if/or), and noun-qualifying adjectives (conducive to the public good). This language is not plain, and requires significant post-enactment interpretation to be enforced. Section 5 of the same Act goes on to state:

Where a person is… liable to deportation, then… the Secretary of State may make a deportation order against him.

Note the use of modal and enabling verbs here. The Secretary of State ‘may make’ is the chosen construction, not ‘shall enforce’. To test my hypothesis that immigration legislation has become increasingly indeterminate, I wrote a simple computer program (available to test here) that analysed all immigration laws enacted since the first one on the subject. That is 1,233 sections of legislation, from section 1 of the Aliens Act 1905, to section 96 of the Immigration Act 2016. Using the same natural language processing (NLP) tools used in search engines, I identified four prominent causes of indeterminacy in law – adjectives, conjunctions, modal verbs, and enabling verbs. Note that it would be extremely difficult to measure meaning across time, as meaning is not fixed in language. As such, my approach was to measure meaninglessness instead. Figure 1 describes the findings: 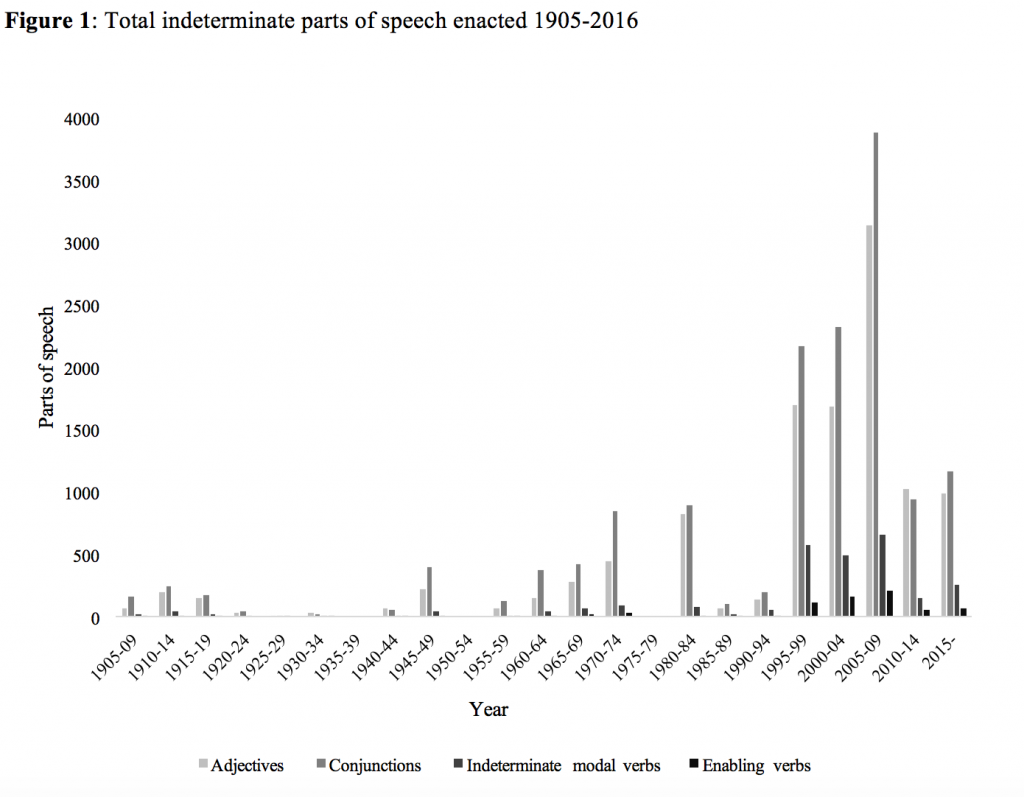 Figure 1 describes, in totals, the indeterminate parts of speech enacted by Parliament. It tells us, for instance, that 3,138 adjectives were included in all Acts enacted from 2005-09. But, so what? Why should this have anything to do with the likelihood of government defeat in court? It is because indeterminate law lacks any ‘logic of communication’, as Vivien Schmidt would put it. This means there is no clear link between policy aims, and decisions taken to implement policy. Any links are left to be determined, predominantly, by government discretion.

But Parliament’s sovereignty and the rule of law demand that legislation be the final word on policy legitimacy. Any reasonable doubt as to the meaning of that legislation can be debated in court. So why do immigrants increasingly win? Because, ruling against a government use of power will typically be the more conservative interpretation of Parliament’s intent. And, because constraining a government assertion of power is in the best of interests of natural justice, the weaker party enjoys the benefit of any doubt.

Which parts of speech are most likely to encourage judges to rule against the government? It is those that cannot easily be pinned down. Adjectives can be defined by judges in a case and will less likely lead to further, successful, appeals in future cases. Enabling verbs (make/amend) are used to grant discretion to government, but that discretion will typically have been legitimately delegated by Parliament. It is conjunctions (if/or) and indeterminate modal verbs (may/might) that create enduring indeterminacy when describing powers. Conjunctions allow multiple contexts to be covered by the same text. Indeterminate modal verbs give broad leeway as to when and how far discretion can be used. It was my conjecture that these parts of speech, taken with reforms to lower courts, offered the best model for government losses on appeal.

The upshot is that judges increasingly rule against the government because Parliament has notably lacked ‘control’ of its language. It is legitimate for judges to intervene in policy where its basis in law can be doubted. Therefore, slamming judges for ‘liberal’ or ‘activist’ rulings, is not founded on convincing reason or evidence. If Parliament is to be sovereign, it needs to control what, and how, it speaks.