Coalition governments are puzzling because they require otherwise competitive political parties to compromise on their policy preferences, and then charge individual cabinet ministers with implementing the coalition agreement. We know from comparative research that national parliaments can play an important role in helping the parties in coalition government work together. Coalitions typically form after interested parties bargain over and reach a coalition agreement. This agreement must be ‘policed’ because individual ministers may have an incentive to deviate from the agreement, toward the preferences of the party to which they belong. Conservative ministers, for example, may be more inclined to follow Conservative party policy than implement the coalition agreement, which was, in some way at least, a compromise between Conservative and Liberal Democrat manifesto positions.

In those polities where coalition governments are more common, parliaments provide tools by which parties in coalition government can monitor, control, and constrain each other – to make sure that no one party is dominating the policymaking process. These parliamentary mechanisms are important because they help to ensure the stability of a coalition.

Parliament is (or at least in 2010 was) unfamiliar with coalition politics. How then did it help both parties to keep tabs on each other? Parliamentary committees’ engagement in the legislative process is one important means by which parties monitor each other in cases where coalition government is the norm. Westminster’s committees, however, remain the poor cousin of those in many European parliaments. In the absence of a system of strong and powerful parliamentary committees, we argue that parliamentary questions, provide a potential mechanism for parties in coalition government to keep an eye on each other’s ministers.

When members from the governing parties fear or detect deviation from the coalition agreement during implementation (either in terms of proposed legislation or the executive implementation of policy), they can table parliamentary questions to extract specific high-quality information on the actions of ministers and ministries. The act of asking a parliamentary questions may also send a signal to the minister that the other party or parties in the coalition are closely watching; ultimately incentivising the minister to return to the coalition agreement. In response to such PQs, the minister corrects the policy drift. Since we expect that the drift in implementation is more likely in areas in which coalition parties are more divided, we would expect more questions in such policy areas.

In the UK Parliament parliamentary questions, and in particular written ones, are an ideal mechanism for intra-coalition monitoring for a number of reasons. For example, Ministers must answer a written question, typically in a timely fashion (one week in the British case), and must provide a truthful answer. Because written questions can request very specific information and allow time for the answer to be researched, ministers have less opportunity to say that the information requested is not available.

In addition, parliamentary questions allow implementation of policy and legislation to be monitored. Legislatures delegate the details of policy implementation to ministers who may then delegate the task to civil servants. Although research on how coalitions operate has, for a long time, said little about implementation, it seems reasonable that any attempt to police the coalition bargain should pay attention to how policies are implemented. Parliamentary questions can help parties explore all aspects of ministerial behavior – including planned legislation, delegated legislation, policy implementation and the operational performance of the minister and ministry.

To test our argument, we analyzed a new dataset of written questions in the House of Commons between the 2010 and 2015 general elections. We looked at the numbers of questions asked by Conservative and Liberal Democrat MPs to each government department. Table 1 shows how the departments were divided up by party and how many questions were asked on average of each department by Conservative and Liberal Democrat MPs. Our analysis shows that, as the policy distance between the questioner’s party and the party holding the ministry increases, MPs ask more questions. This is after taking account of other factors that might affect the number of questions asked such as the salience of the topic for the an MP’s party, the size of an MP’s majority, and the share of government spending taken up by the department n question.

Figure 1. The effect of policy divisiveness on the number of questions asked of partner party ministries. 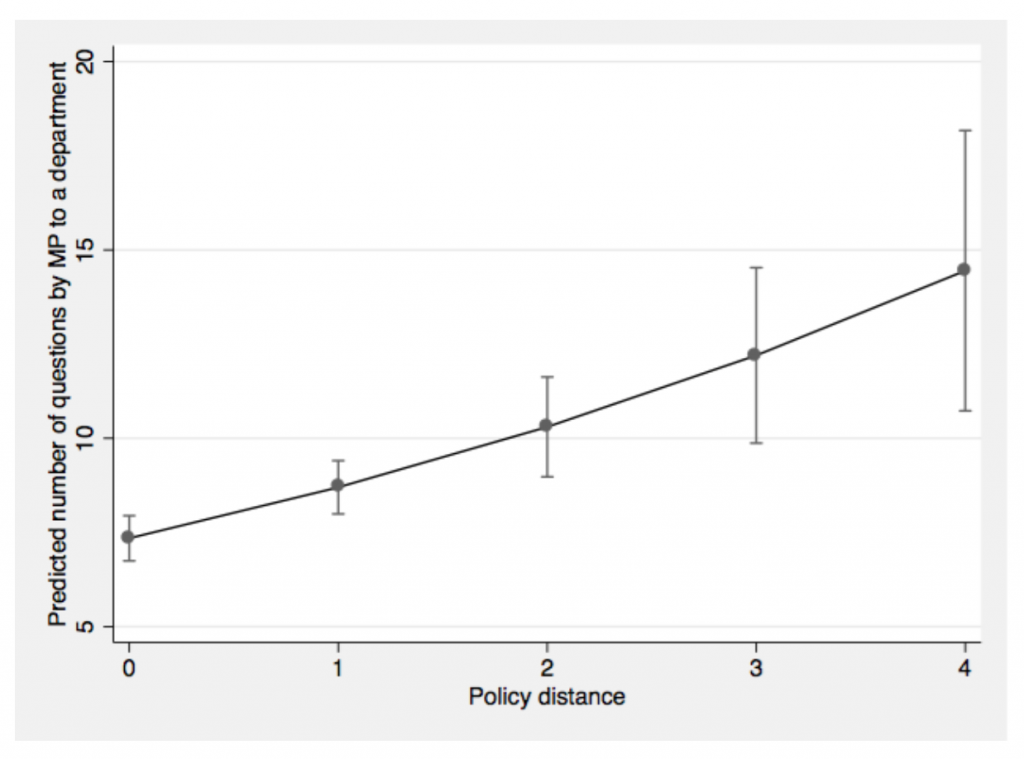 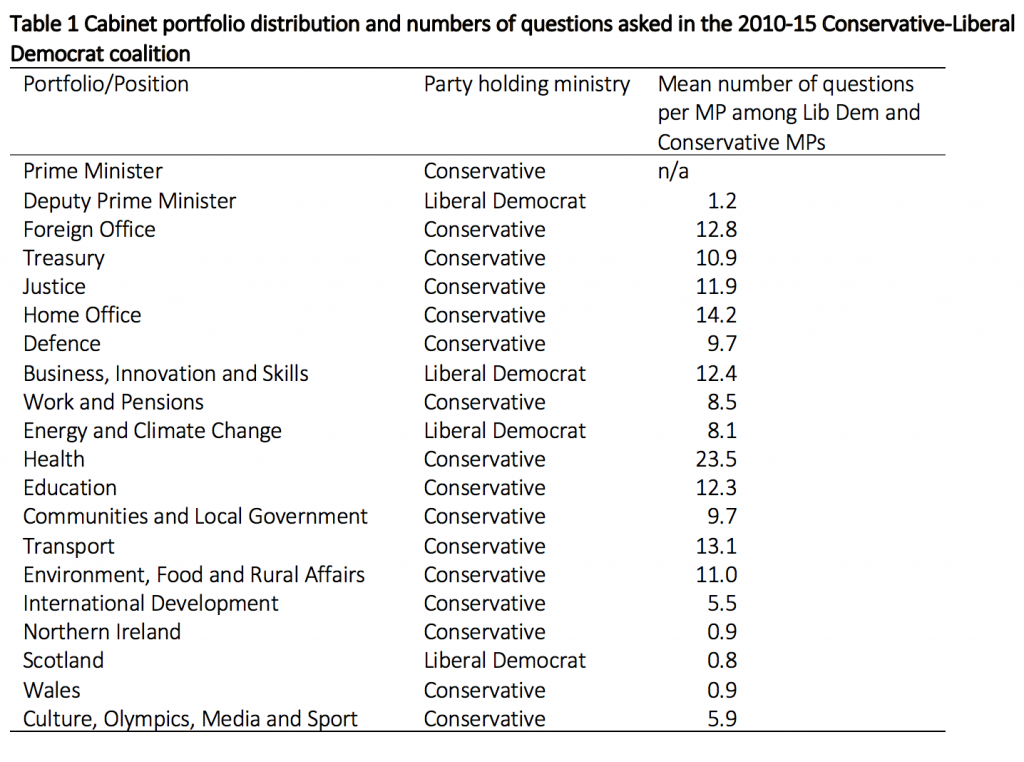 Our evidence indicates that the idea of using the legislature to monitor coalition partners applies in the case of the Commons. More generally, the suggestion is that behaviour aimed at ‘policing the bargain’ within coalition governments can exist in ways not previously considered by scholars.

Shane Martin is the Anthony King Professor in Comparative Government at the University of Essex. His research focuses on legislatures and in particular on how electoral incentives shape representatives’ preferences, the internal structures of parliaments, executive oversight and the production of public policy.

Richard Whitaker is an Associate Professor in Politics at the University of Leicester. His research covers legislatures, in particular the European and UK parliaments, as well as the UK Parliament’s role in the Brexit process. He is the author of The European Parliament’s Committees: National Party Influence and Legislative Empowerment (Routledge, 2011).