Ian Anstice examines how local library services across the UK have been affected by cuts. Although less than 10 per cent have been axed since 2010, the services and provision offered have been drastically reduced and reshaped in a number of ways. As with other public institutions, such cuts, tacitly supported by the Coalition and Conservative Governments, have undermined the very principle upon which local libraries were built: that of being a public good.

British public libraries are, since 2010, undergoing the most difficult period in their peacetime history. Before the coalition government came into power, public libraries had been experiencing static or increasing budgets combined with stable or reduced levels of usage. Large scale projects to refurbish central libraries had restarted in Liverpool and Manchester and the largest ever English public library rebuild had started in Birmingham. Now, the sector is facing deep and sustained budget cuts, with hundreds of small libraries under threat of closure or passing to volunteers and even the new Library of Birmingham confronted with a deep crisis. Facing this disaster, the old certainties have been washed away, with the role of paid staff, council involvement and even the library itself being called into question.

Contrary to what can be gleaned from much of the media, the last five years has not seen a dramatic number of library closures. According to figures from the Chartered Institute of Public Finance and Accounting, there were 357 fewer libraries in 2014 than there were in 2009/10 out of an original total of 4,612. This figure, representing 8 per cent of buildings, is quite impressive over just a five year period but nowhere near the massacre present in public perception. Moreover, these closures are not just simple reactions to budget cuts. Rather, such as in the case of Brent, they were part of a deliberate strategy to concentrate funding on a smaller number of branches, improving them and thus maintaining usage. 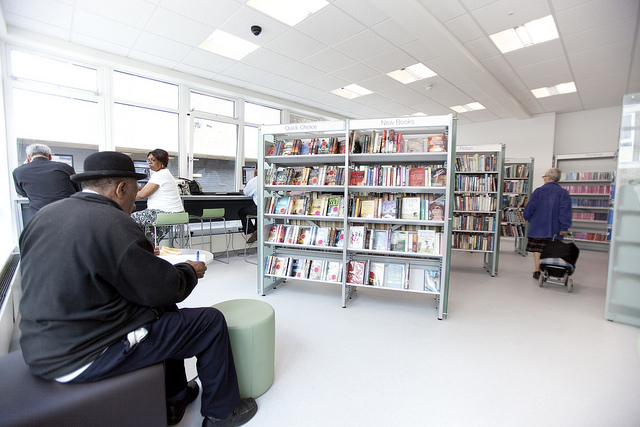 That’s not to say the cuts aren’t real. In fact they’re far deeper than 8 per cent. Indeed, there has been an overall reduction in budget of at least 20 per cent over the same time period which, depending on how one factors in inflation, could mean a cut of up to 40 per cent in real terms. Bear in mind as well that certain authorities have cut their budgets far deeper than this average. So what accounts for the relatively small number of closures? Public library authorities, of which there are 151 in England alone, have found many ways to reduce expenditure without closing libraries. A term commonly used by campaigners for this is the evocative “hollowing out”. This can include all manner of reductions, notably in opening hours, staffing and in book fund. Somerset, which retreated from closing 11 branches and 4 mobiles due to a lost court case, instead lost staff, introduced self-service machines and volunteer staff, and moved services into co-located buildings. Other authorities have gone for a mixture of these as well reducing the book fund. Obviously such responses frequently lead to reductions. By not closing some of its buildings in a time of budget reduction, a council can simply discourage library usage, which then weakens the case for keeping them open overall.

As well as cutting expenditure, increasing income has been tried also, with one of the most frequently mentioned possibilities being to install a cafe. Although this can be successful in popular and busy locations, the costs of running such a retail arm means a profit cannot be guaranteed. There are also concerns about the over-commercialization of libraries, which have long been valued as neutral welcoming spaces where, almost uniquely on the High Street, one does not need to spend money.

In addition, councils have been outsourcing the public library service to other organisations, although inroads by the private sector have been very limited. The sole example is Carillion, which runs four library services, albeit via a non-profit arm. Far more libraries have been passed to non-profit trusts, with the most prominent being Greenwich Leisure Limited along with 22 others. Two library services (York and Suffolk) are run as mutuals.

Along with library closures, the other response to budget cuts, attracting high media attention, is the passing of branches to volunteers. From a handful prior to 2010, there are now at least 361 such libraries in the UK, with more being planned. While the replacing of paid staff with volunteers is rarely claimed to be an actual improvement, local library users may reluctantly feel forced to become volunteers in order to keep their library open. Some have, indeed, complained of being blackmailed by local authorities into the move. Councils can argue that if a local community does not wish to volunteer to run its local library then they don’t really want it. More tellingly, the issue of volunteering can split campaign groups into two or even co-opt those protesting against cuts on to the council side in an attempt to rescue the service. The success of some volunteer libraries, at least in the short term, encourages councils to withdraw from more, even though there are concerns about the future of such initiatives in the longer term. There is also the concern that volunteer libraries (confusing called “community libraries” by many councils) further atomise a larger library service because each becomes run as a separate organisation.

Public protest against public library closures has been strong but often ineffective. Consultations on public library closures are commonly reported to be the most responded to of all council consultations but also often have little effect. Within days of cuts being formally announced, campaign groups spontaneously form in the affected areas, either from library users or from pre-existing Friends of the Library groups. Such groups have a variety of weapons at their disposal, from placarding council offices to protest marches to petitions. If all else fails, campaigners can and do take councils to court via judicial reviews. This time-consuming and expensive business has led to several notable turnarounds by councils such as Somerset or Moray. But, in other cases, decisions have gone against campaigners even where they have made initial wins such as in Lincolnshire recently. In all instances, the councils are likely to blame the campaigners for the cost of legal action, even if they are found to have been acting improperly.

National responses to cuts in public libraries have varied depending on the group involved. Those organisations who see themselves as tied to government or local government have met the challenge with pragmatism. The Society of Chief Librarians, whose membership is senior library officers, tailors its publicity to promote libraries as fitting in with government agendas. It even welcomes the replacement of paid staff with volunteers as long as they are “professionally managed”. The Arts Council England which, as well as encouraging best practice is funded by the Government to distribute grants for projects to libraries, can also be relied upon to rarely, if ever, directly challenge the Government’s position. The Chartered Institute of Library and Information Professionals, on the other hand, while also wanting to associate libraries with government aims, in order to stress their importance, is more likely to protest, especially in recent years. They are a member of the Speak Up For Libraries coalition as well as having adopted a stance formally against the replacement of paid staff. The trade unions Unison and Unite are far more likely to protest against cuts, which directly affect their members, as is the national campaign group the Library Campaign.

Stung with criticism over cuts to library services, the response from the Department for Culture, Media and Sport has been to either deny the impact of cuts or to conduct research into best practice within the sector. What it has not done, and which has caused much anger amongst campaigners, is to intervene in any library authority, regardless of the severity of the cuts proposed. The 1964 Public Libraries and Museums Act gives the Secretary of State the power to order a review, and ultimately take over the running of a library service, if it is not meeting its obligation to provide a “comprehensive and efficient service”. However, the minister responsible for libraries throughout this period, Ed Vaizey MP, has steadfastly refused to intervene in any authority. As such, councils consider library services a “soft” statutory service, with councillors even sometimes failing to know that they are statutory at all. Indeed, it is notable that almost all legal challenges by local groups against cuts have concentrated instead on other legislation, usually Equality and Human Rights.

What is apparent to any serious observer of public libraries over the last six years is that, when push comes to the shove, the need to reduce funding normally takes precedence over local protest and legal protections. It does not matter how many thousand respond to a consultation or protest in marches, if the council has decided on a course of action then that is what will happen. The protection of the courts, in a service like libraries where legal precedent is limited and definitions are weak, is haphazard at best. Central Government has shown itself impervious to appeal when it comes to cuts to library services. It is also dedicated to allowing local councils to find their own solutions, and is unwilling to impose strategies or reorganisation on the multitude of local library authorities and the hundreds of new volunteer libraries. In other words, the old certainties of public libraries being a public good, protected by popularity and government, have gone. It is up to each authority how best to respond to budget reductions and, if it decides that cutting libraries are a way to do this, then there is little than can effectively be done to stop it.

Please note: a version of this article originally appeared on the Political Economy Research Centre blog and is reproduced here with kind permission. It represents the views of the author and not those of the LSE.

Ian Anstice (ianlibrarian@live.co.uk) runs the Public Libraries News website which is the main source of information on the sector and is used regularly by library staff, users, politicians and the media. He has been working as a professional librarian since 1994 and was recently made an honorary fellow of the Chartered Institute of Library and Information Professionals. He is currently a library manager in the North West of England. This article is No.11 of the PERC Paper Series, and available as a PDF.