Using a microsimulation model, Martina Pezer assesses the cash support which families receive for their children in six countries, including the UK. The results confirm that a combination of universal and targeted support (either from family or social assistance benefits) is the most effective in poverty reduction and cost compensation.

Despite the eradication of child poverty being on the political agenda since the late 1990s, child poverty remains relatively high in the UK. But how do policies compare to those of EU countries? To answer this question, I compare relevant public policies in the UK, Germany, Sweden, Greece, Slovakia and Croatia. Microsimulation models use survey data on the incomes of households and individuals and calculate their benefits entitlements, taxes and social insurance contributions, and disposable income. The selected countries represent different welfare regimes and various public policy designs. To enable comparison, full benefit take-up is assumed in all countries. The simulated policies are from 2019 and more details about the data, policies and their simulation are available here. In addition to children, I bear in mind that young adults often rely on their parents for financial support until the end of their education or during unemployment. Thus, economically dependent young adults up to the age of 25 living with their parents are also considered in the study. While UK and Sweden do not provide family benefits for such age groups, they are commonly provided during tertiary education in other countries.

The analysis encompasses child-contingent payments from policies such as child benefits, tax reliefs, as well as social assistance and housing benefits. By country, these can be summarised as follows. In the UK, child benefit is universal but gradually decreases with household income and is highest for the first child. The UK child tax credit is a means-tested benefit with a two-child limit for new claimants since 2017. In Germany, parents receive a universal child benefit that slightly increases for large families or a child tax allowance (for high-income households), and two means-tested benefits (additional child benefit and educational allowance). Swedish parents can receive a universal child benefit with a top-up for two or more children. In Greece, households’ equivalised incomes are used for the child benefit means-test; the benefit is doubled for the third and subsequent children. The main family policies in Slovakia are a universal child benefit, and the refundable tax credit (with a work incentive, doubled for children under six). Croatian parents receive a means-tested child benefit (with supplements for a third and fourth child) and a tax allowance (increasing with each subsequent child). All countries provide some form of social assistance and housing benefits. For the UK, these include universal credit (and income support), working tax credit, housing benefit and council tax support. The main differences between the UK and other analysed countries include the two-child limit, the higher support for a first child and benefit capping.

Figure 1 shows the distribution and structure of child-contingent payments as a share of disposable income by decile group. Generally, in all countries, the share of support decreases with income, while Germany and the UK are the most generous. The sharpest decline is observed in countries with means-tested benefits, followed by universal systems and in Croatia child-contingent payments more or less follow the growth of income in decile groups 2-9. The dominant support is gained through family benefits, but in the UK social assistance and exclusion benefits are as relevant for lower-income households. 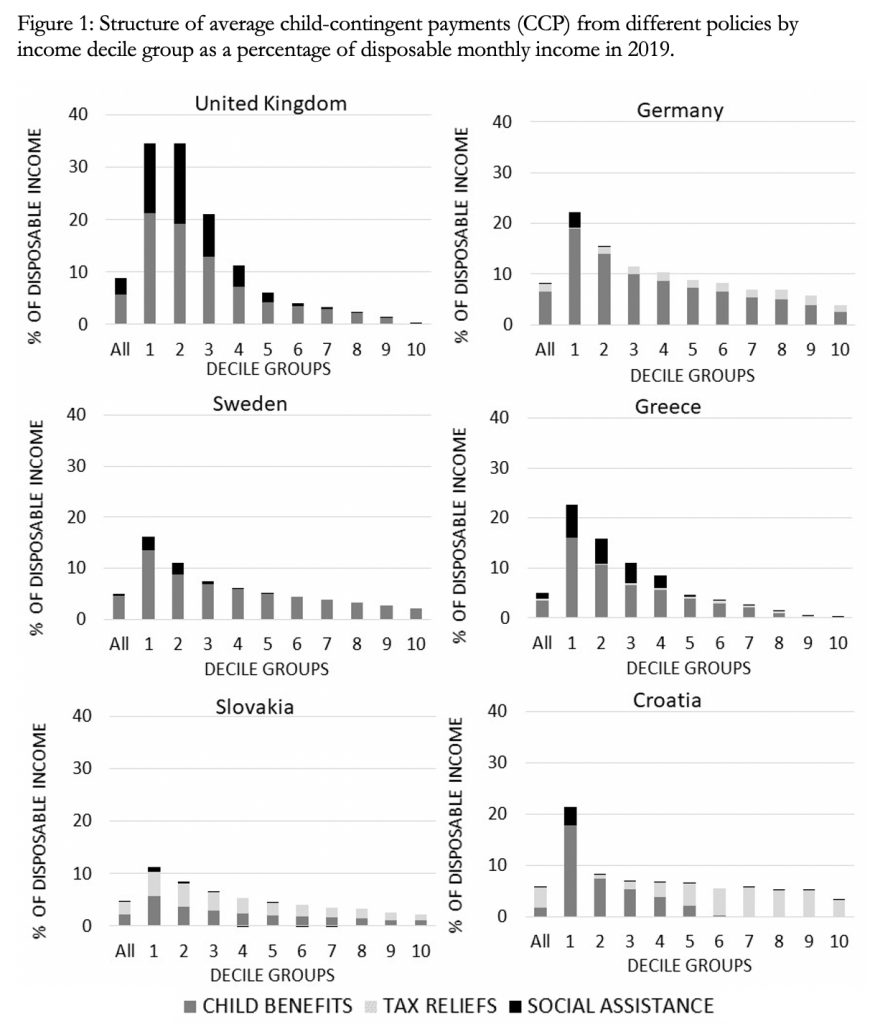 Figure 2 shows the average amount of child-contingent payments per child by birth order. In the UK, families are entitled to the highest support for the first child. Countries which greatly support large families have, on average, higher values of child-contingent payments for a second, third and subsequent child. This is most pronounced in Sweden, Greece, and Croatia, but modest in Germany. Slovakia provides a universal benefit but the amount varies with the age of children and other factors.

UK policies are among the most potent in poverty reduction. While keeping the poverty line fixed, a comparison of poverty rates of disposable income and disposable income without child-contingent payments (pre-CCP income) reveals how many percentage points of poverty reduction can be attributed to family policies (Figure 3). Despite not having high large-family support, the UK’s targeted policies are strongly reducing poverty. But the initial poverty levels (before child-contingent payments) are the highest.

While this comparative research is useful, limitations must be taken into account. The assumption of full benefit take-up to a certain extent overestimates individuals’ entitlements and the magnitude of poverty reduction. Moreover, not all relevant policies in these countries can be simulated due to their complexity or lack of data, something that underestimates child-contingent payments. Further limitations are related to the survey data.

The current design of UK policies, which is more generous toward smaller families with targeted support, does reduce child poverty. At the same time, some policies, such as the two-child limit, aim to improve work incentives, which is a conflicting goal. A good balance of poverty-fighting and incentivising work is difficult to achieve. The analysis highlights that UK policies perform better than those of some EU countries in terms of provided support and level of poverty reduction. But due to socio-economic factors such as lower income inequality, and other welfare programmes, these EU countries do not require such potent family policies to reduce child poverty and have different goals.

Note: the above draws on the author’s published work in the Journal of European Social Policy.

Martina Pezer is a Research Associate at the Institute of Public Finance in Croatia.

Photo by Myles Tan on Unsplash.

The rise of a robot state? New frontiers for growing the productivity of government services

The government’s Work Programme is under threat of financial collapse. The Department for Work and Pensions should revise its performance targets and introduce more credible incentives.