UKIP has won another by-election victory, with Conservative defector Mark Reckless reclaiming his Rochester & Strood seat wearing purple. On the face of it, the constituency doesn’t seem all that favourable to UKIP. Eric Kaufmann explains why UKIP has done well in Rochester, writing that low ‘social capital’ seems to characterise UKIP voters and Rochester residents. The constituency was actually a very favourable target for UKIP – we shouldn’t see is as a straw in the wind.

Mark Reckless has won the Rochester & Strood by-election with 42 per cent of the vote, handing UKIP another victory and an aura of invincibility that is wreaking havoc within the main parties. What is so disturbing for the political elite is that Reckless is a mediocre politician while Rochester – younger than average and relatively middle class – seems unlikely UKIP territory. Or is it? On closer inspection I argue Rochester is fertile UKIP soil. This doesn’t mean the main parties should be complacent, but it should caution us not to leap to the conclusion that this by-election is a bellwether for 2015.

Let me explain. There is little doubt Clacton was extremely favourable for UKIP. Matthew Goodwin writes that it ranks first in terms of UKIP demographics. Goodwin and his collaborator Rob Ford have written a fascinating book that highlights the importance of cultural anxieties in powering the rise of UKIP. I concur. Hence a focus on those suffering economic deprivation, such as poor pensioners, may lead us astray when it comes to fully grasping UKIP.

The most important correlates of strong UKIP support are ethnicity and national identity. The share of the population of a Local Authority that is of White British ethnicity and, of those, the portion that identify as English rather than British, predict nearly half the variation between Local Authorities in 2014 UKIP European election support, as shown in the table below. 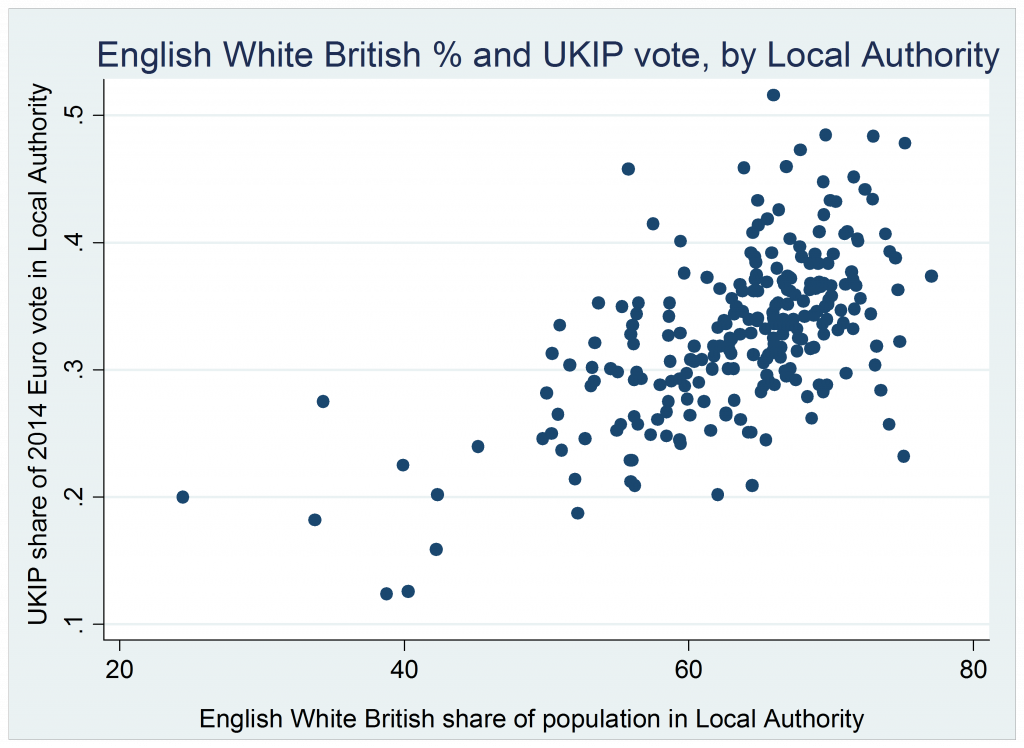 Another reason Rochester is UKIP-friendly is its opposition to immigration, which is partly related to its proximity to diverse Greater London. Though London is not an easy commute, it is close enough to be familiar to many in the Medway area in which Rochester sits. In Gareth Harris’ and my recent Demos report on the White British response to ethnic change, we focus on what Swedish sociologist Jens Rydgren terms the ‘halo effect’ – whereby fears of change are most amplified in white areas proximal to diversity. Think of a nuclear power plant. Studies find that concerns are not greatest among those living by nuclear stations, nor among those far enough away not to think about it, but among those who are close enough to fear it, but not close enough to understand it. With ethnic diversity, those who rarely have contact with minorities and immigrants but are close enough to diverse places such as London to fear impending change are more opposed to immigration and more likely to support the populist right.

Rochester & Strood fits this description. In the Citizenship Surveys of 2009-2011, survey data shows that White British concern over immigration is relatively high in Medway. Among White Britons in England, 60 per cent said immigration should be reduced ‘a lot’. In Medway, this rises to 70 per cent among the 182 White British respondents on the survey who resided in this Local Authority. This helps explain why UKIP won 42 per cent of the vote in Medway in the 2014 European Parliament elections, 18th out of the 248 Local Authorities. A glance at the map of UKIP vote share by Local Authority in the 2014 EU elections shows the Thames Estuary region is a powerhouse of UKIP support. 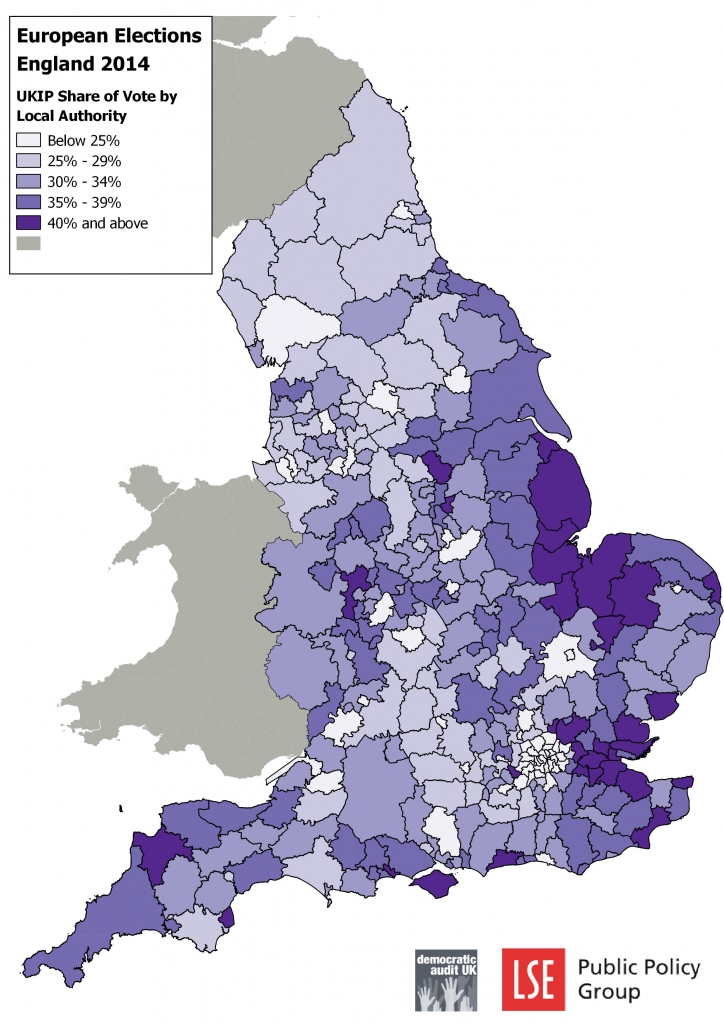 On the face of it, even ethnic composition, national identity and proximity to London don’t seem quite enough to explain the favourability of Rochester. This brings us to a further set of factors which seem to characterise UKIP voters and Rochester residents, low ‘social capital’, or connectedness.

Specifically, data from Understanding Society shows UKIP voters trust neighbours and government less than White British people elsewhere. They are less attached to neighbours and neighbourhoods, and express a stronger desire to leave their immediate locale. This is so even with controls for neighbourhood deprivation, crowding and the proportion of renters, as well as a host of individual characteristics such as age, education, gender and income.

Low social capital is linked to nonvoting. UKIP seats have significantly lower turnout than average: the British Election Study 2015 Internet panel survey reveals that those who didn’t vote in 2005 or 2010 were significantly more likely to vote UKIP in 2014. Understanding Society finds that an important chunk of UKIP voters didn’t turn out in the previous election. Low social connectedness and trust is linked with low turnout and attenuated local connections to the major parties. This renders switching more likely and reduces loyalty to established brands. Those who switched from Labour in 1997 to the Tories in 2005 are significantly more likely to have voted UKIP in 2014. So too for constituencies: more such switchers signals a stronger UKIP seat even when controlling for Tory support.

Now look at Rochester & Strood. Labour lost 6.8 per cent in 2005 and a whopping 13.7 per cent in 2010. The Conservatives gained 2.5 and 6.6 per cent in those respective elections. A pattern of low party loyalty coupled with rising conservatism generated the seedbed for UKIP’s success. UKIP has been blessed with two favourable by-election targets, Clacton and Rochester. The main parties shouldn’t be complacent about UKIP’s rise, but it is still too early to call this by-election a straw in the wind.

Eric Kaufmann is Professor of Politics at Birkbeck College, University of London, and author of Changing Places: the White British Response to Ethnic Change (Demos, October 2014). He may be found on twitter @epkaufm

Britain’s politicians should take note: The ‘grey vote’ is not as grey as we think