Ewan Gibbs explains how major alterations to the politics of class and nationhood have their origins in deindustrialization, and how these deep roots continue to have consequences in Scottish politics.

In March 2021, Scottish Labour’s long rumbling internecine conflict rumbled on. Days after Anas Sarwar had been elected, pledging both unity and opposition to a second independence referendum, Hollie Cameron, the candidate for Glasgow Kelvin, was deselected by the central Scottish party. This decision followed Cameron’s interview in the National, in which she argued the right to call a referendum lay with the Scottish Parliament, and put forward her view Scottish Labour should consider supporting one.

Cameron’s deselection was rubber-stamped by Labour’s Scottish Executive Committee soon after, but the Kelvin constituency party were unhappy at what they saw as the Executive riding roughshod over a legitimately democratically elected candidate. The Constituency Executive released an open letter that attracted hundreds of signatories. Labour grandees, such as the former Scottish health minister, Malcolm Chisholm, pointed out that Cameron’s ‘comments were moderation itself’ and that Labour had to appeal to pro-independence voters. The conflicting standpoints taken by Sarwar and Cameron have long roots in the Scottish labour movement. These relate to the political implications of the economic restructuring Scotland experienced across the second half of the twentieth century.

Cameron is a young, left-wing, former Yes activist – precisely the demographic that Scottish Labour needs to appeal to if it is to ever become the predominant vehicle for social democratic politics in Scotland again. Her deselection by bureaucratic means demonstrates the difficulty Sarwar’s leadership faces in both claiming to uphold principles of internal unity with a hardline stance on a second referendum. When the wider institutional labour movement, as opposed to solely the Labour Party, is considered, then this becomes even more difficult. The Scottish Trades Union Congress (STUC), Scotland’s union federation, favours a second referendum. Its two largest affiliates, Unison and Unite, were officially neutral in 2014 and are unlikely to move towards a ‘No’ stance in the event of a second referendum. Chisholm is not alone either. Henry McLeish, a former Labour First Minister, has also moved away from a Unionist standpoint. Dennis Canavan, a former Labour MP, was among the most prominent supporters of independence during the last referendum.

These developments were not sudden, and they have a history that stretches far beyond the major switch in party allegiance among young, working-class, and self-identified left-wing Scottish voters from Labour to the SNP between 2007 and 2015. In 2019, on the twentieth anniversary of his death, it was revealed that the ashes of the miners’ leader, Michael ‘Mick’ McGahey, lay in the foundations of the Holyrood parliament building. Scotland’s first First Minister, Donald Dewar’s, decision to quietly embed McGahey’s remains in the home of Scotland’s devolved polity hint at the much longer industrial roots of the differences currently festering within Scottish Labour. McGahey was a committed member of the Communist Party of Great Britain and rose to the presidency of the National Union of Mineworkers Scottish Area in 1967. His union’s records reveal just how longstanding these differences are.

The Area’s annual conference in 1950 was addressed by John Taylor of the Labour Party’s Scottish Council. Taylor would become the MP for the coalfield constituency of West Lothian the next year, but nevertheless attacked the NUMSA’s leadership for supporting the ‘Scottish Covenant’, a huge petition that claimed to gather over two million signatures in support of a devolved Scottish parliament. Taylor mocked the miners for sharing a platform with ‘such proletarians as the Duke of Montrose’. More fundamentally, he asserted a principled position of opposition to devolution, then more commonly known as ‘home rule’. Constitutional reform ‘was a diversion and a trap’. Taylor dismissed territorial politics, stating that to socialists it ‘did not matter much where we were governed from but by whom we were governed’.

Taylor’s perspective indicates that constitutional politics is far from a straightforward question of left and right. Opposition to Scottish nationalism based on appeals to British working-class unity enjoyed widespread support in the mid-twentieth century Labour Party. This is a diminished but far from fully extricated perspective, and it was the view that Richard Leonard often put forward as Scottish Labour leader between 2017 and 2021. The fact that Taylor articulated his opposition to a trade union leadership that was in favour of decentralising constitutional reform is also telling. McGahey continued where his predecessors left off. At the 1968 STUC congress, he spoke in favour of a Scottish Parliament in the context of rising labour movement concern about rising support for the SNP. McGahey ‘firmly believed that Scotland was a nation. Not a region of Britain, not a district, but a nation in its own right and entitled to demand a right to nationhood.’ It was the labour movement who were ‘the custodians of true Scottish nationalism’, and not the SNP.

McGahey made his argument in the context of deindustrialization. Colliery closures and mining job losses accelerated across the 1960s, as Harold Wilson’s Labour government opted to increase reliance on oil and nuclear power, the latter on dubious economic grounds, at the expense of coal. Miners also objected to the centralisation of the nationalised coal industry. One union official complained around the time that McGahey made his speech that ‘it used to be that the colliery manager had to plan out his own pit, then Area officials took control of this and now we find that the planning for the Pit is done 500 miles away.’

The NUMSA’s stance remained controversial within the STUC during 1968. McGahey’s motion in support of a Scottish parliament was remitted for discussion by the STUC General Council, but by the middle of the 1970s, the federation was unambiguously pro-devolution. There are, of course, important distinctions between devolution and independence. NUMSA leaders and activists viewed devolution as compatible with defending a unitary nationalised British coal industry and appealing for class unity with workers from across the UK. Nevertheless, these experiences from over half a century ago also illuminated important fault lines that still animate debates in the Scottish labour movement.

Distinct understandings of the benefits and drawbacks of the unitary state – now usually referred to as ‘pooling and sharing’ by its advocates – and views of the benefits of ‘self-determination’, or the sin of ‘separatism’ to decentralisation’s detractors, were visible in the earlier home rule debates. So were different explanations for increased support for the SNP. A materialist perspective centred on the political economy of the Union and Scotland’s placed within it competed with a raw ideological stance that weds support to the labour movement to support for the unitary state in more committed terms.

These competing views of the politics of class and nationhood continue to have consequences in Scottish politics, as demonstrated by recent controversies in the Scottish Labour Party. Sarwar’s victory, with around 60% of members’ votes, was comprehensive, but his opponent, Monica Lennon, won around 40% of the vote and enjoyed endorsements from several unions. Lennon put forward a similar stance to Cameron on a future referendum. Both positions are stances that evolved over the course of the second half of the twentieth century and neither will disappear any time soon.

Ewan Gibbs is Lecturer in Global Inequalities at the University of Glasgow and author of Coal Country: The Meaning and Memory of Deindustrialization in Postwar Scotland (University of London Press, 2021). Coal Country can be downloaded free in PDF or purchased from this link.

Photo by Nick Nice on Unsplash. 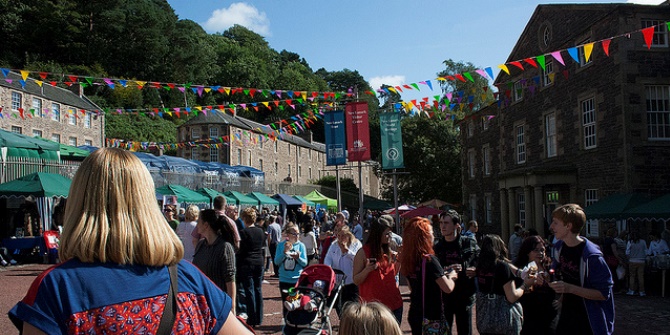