In late 2010 the Coalition government announced that the Education Maintenance Allowance (EMA) – a UK-wide scheme that offers weekly finance to students from low-income households who continue into post-compulsory further education – would come to an end in England after only 4 years of national availability to all 16-18 year olds. Joan Wilson finds that the scrapping of the scheme may work against the Coalition’s plans for social mobility.

The education policy stance of the Coalition party centres around fairness and equality of opportunity for all pupils, irrespective of their social background. The recent Schools White Paper emphasised both the government’s mission to reverse the backward trend in social mobility and their focus on returning to an “aspiration nation”. But the scrapping of the EMA (no new EMA applications have been accepted since the beginning of January 2011) may have implications for the aspirations of students from lower-income families to continue into an academic track of further education, an outcome which, over the long run, stands to worsen their social mobility and their chances for fair opportunity.

The EMA scheme was announced by the then Labour government in 1998 and was piloted in schools and colleges in 1999, before being rolled out nationally from September 2004. While the scheme targeted 16-18 year old full-time students, national implementation was staggered by student ages: despite the policy design having been in place for more than a decade, full coverage of the 16-18 age range has only taken place over the past four years, since 2006-07.

Students aged 16-18 are entitled to the allowance if they are studying for A-levels, GCSEs, or vocational courses and are attending:-

State-provided benefits and other forms of support are not taken into account in the calculation of household income, nor are earnings that the student themselves may make through activities such as part-time employment. The cash transfer is paid directly into the bank account of the student as opposed to being received by their parents, as is the case for receipts such as child benefit. There are no restrictions on the uses to which the allowance is put, although generally students spend it on transport costs and course-related expenses, such as books, and equipment or clothing for vocational courses.

Government expenditure on the scheme was reported to have totalled £580 million in the financial year 2009/10, with one or more payouts made to 643,000 students in the school year 2009/10, equivalent to 32.3 per cent of all 16-18 year olds in education and training in England, based on provisional young learner population estimates.

Staying on in Further Education and the Aims of EMA

At the time of EMA introduction, policymakers saw financial constraints as a barrier to involvement in post-16 education, especially among students from worse-off backgrounds.

The EMA aimed to directly reduce the monetary cost of education participation among such students as a means for raising their participation. In terms of both retention and attainment, attendance and performance-related conditions attached to the receipt of EMA and the payment of bonuses formed the mains means of influence on these channels. The graph below charts the extent of the participation problem from an international perspective, indicating enrolment rates among 15 to 19 year olds over the period 2000 to 2008 for the UK and the US, as well as the average rate for the OECD as a whole:-

Full-time and part-time students in public and private institutions 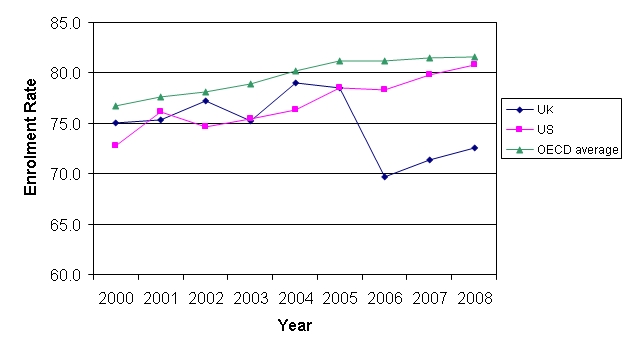 Source: Adapted from data on Access to Education, Participation and Progression – Who participates in education? – Indicator C1 Education at a Glance: OECD Indicators, Table C1.2.

In their evaluation of the successfulness of the EMA pilot implementation, the Institute for Fiscal Studies (IFS) compared how students entitled to EMA in nine urban Local Education Authorities (LEAs) fared relative to students from nine similar LEAs (on historical participation rates and geographical proximity) who were not eligible for it. They found that the scheme had been successful on all fronts:

Despite these robust results, the Coalition government has used findings from other, more recent research to argue in favour of scrapping the EMA. The research, from March 2010, found that only 12 per cent of students who completed Year 11 in 2008 or 2009 (aged 15) and who then went on to receive EMA (out of a sample of 2029 young people) agreed that they would not have done their further education course without the EMA, meaning that 88 per cent would have done so. The government argued that this 88 per cent ‘deadweight’ cost was too high in a time of financial austerity and proposed that better targeted finance would be offered as an alternative, under the umbrella of the pre-existing enhanced discretionary learner support fund. For the moment, this fund is worth just £26 million and the Coalition party anticipates that this level of support will be tripled by 2014-15.

If the economy were on an upward trend, the removal of EMA funds might have led to a fall in staying on rates, as the opportunity cost of education is increased by their removal, affecting students from lower-income families and those with a higher margin of preference for immediate monetary rewards in particular, making the alternative of paid employment more attractive. In this case, the scrapping of the allowance may have fed badly into future statistics indicating participation rates.

However, current high levels of both youth and adult unemployment, (965,000 – the highest level on record since 1992 – and 2.49 million respectively) present a buffer against any dramatic drop in post-16 staying on rates by acting as deterrent to seeking work rather than remaining in education. On this basis participation may have come out looking relatively unaffected by the loss of EMA. Of course, for the Coalition government neither of these scenarios will be the long-term outcome of EMA removal, since, in line with the previous Labour government’s proposal, they plan to enforce further education participation by raising the compulsory age at which pupils must be in some form of education or work-based training to 17 by 2013 and to 18 by 2015.

On the face of it, a compulsory requirement to remain in education or training beyond the age of 16 combined with discretionary support funds appears to be a more economically sound policy than nationally-available EMA payouts. However, to conclude this would be to take a short-term view. Pupils from poorer backgrounds were enticed into staying on and achieving in an academic track as a consequence of EMA, while under compulsory requirements cohorts from low-income families may opt for more vocationally-related training in the future. If their decision to follow a non-academic route is driven by a lack of aspiration and an underestimation of the labour market returns to academic qualifications, in turn influenced by financial constraints, then the scrapping of EMA represents a lost opportunity for the government to raise entrenched low levels of social mobility among students from economically-deprived backgrounds.

Discretionary support funds will go little way towards reducing the costs of participation for these students relative to the EMA, since decisions on the amounts to be paid out and prioritisation of payments are made by schools and colleges themselves, with the potential for variability in receipt by institutions.

Additionally, although support funds can be used to cover travel costs, without a guarantee of being able to afford these costs – as was provided with more certainty under the EMA scheme – students may be discouraged from applying to institutions that are further away from their home, even if they are preferred or are of better quality.

Finally, as was noted in the IFS study, the EMA policy presented a form of redistribution to lower-income households with dependent children, and, judging by their findings, this seems to have been a very worthwhile strategy for targeting inequality of opportunity among these families.