One in seven workers in the UK are now self-employed with more than 650,000 starting out on their own since the recession. While some have argued that many work for themselves more out of necessity than choice, a recent survey for the Resolution Foundation confirmed that the overwhelming majority of the UK’s 4.5 million self-employed prefer being their own boss. Self-employment can bring with it great opportunities and enhanced freedom. It can also mean great financial insecurity. It’s important that both sides of the equation are considered.

Between 2006-07 and 2011-12, the typical self-employed person – if there was such a thing – saw their weekly earnings drop by 20 per cent; typical employees suffered a 6 per cent drop in their weekly wages over the same period. The composition of the self-employed will have played a role in this though with more women and part-time workers joining their ranks. This plunge in pay echoes with findings that the self-employed are slightly more likely to be underemployed – that is, seeking additional hours – than employees. What’s more remarkable is the turnaround that’s happened since 2005. Back then, the self-employed worked on average 30 hours more than they wanted to per year; now, they work 30 hours fewer than they would like.

Periods of low earnings and demand are part of the risk and reward at the heart of self-employment. Modest incomes in the early years are often seen as a price worth paying initially to allow a business to flourish. However, it’s not just their pay packet that can be a cause of concern for the self-employed.

One in five of the self-employed people surveyed by Ipsos MORI for our new self-employment report who tried to get a mortgage said they were prevented from doing so due to being self-employed. And it’s not just those who are seeking to buy that can struggle: 15 per cent say they had been unable to obtain personal credit or loans because of their employment status and one in twenty even had trouble finding a tenancy because of being self-employed.

Chart 1: Proportions responding ‘yes’ when asked “Has being self-employed prevented you from…” 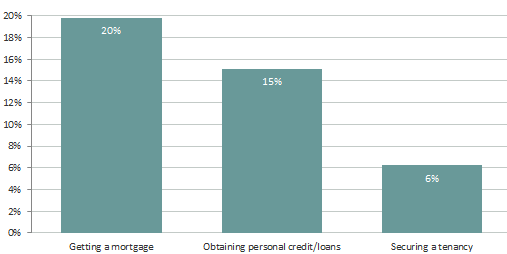 Of course, these are a minority, and many self-employed people won’t have faced these problems. Moreover, there is always a need for caution when talking about making it easier for people to access mortgages and assessing the affordability of a financial product will often be more challenging when dealing with the lumpy and unpredictable income of a self-employed person. But when taken together with difficulties around personal credit and renting, it seems that the self-employed may be drawing the short straw, solely by virtue of the nature of their employment.

Although the growth in self-employment is unlikely to continue at its recent meteoric rate, there are good reasons to expect it will continue to play a large and vital part in our jobs market. We need to make sure people have the help and support needed to flourish. A fundamental look at how the self-employed are supported, in terms of access to financial products and capital but also support for pensions, tax treatment and how their earnings will interact with Universal Credit is long overdue. And we should also bear in mind that one of the best ways to help the self-employed thrive is to ensure that employee vacancies are available for the minority who would rather not be self-employed.

Note:  This article gives the views of the authors, and not the position of the British Politics and Policy blog, nor of the London School of Economics. Please read our comments policy before posting. Homepage image credit: Eneas de Troya

Conor D’Arcy is a researcher at Resolution Foundation and co-author or new report ‘Just the Job or a Working Compromise? The changing nature of self-employment’