Will the Prime Minister’s decision to call an early election work in her favour? Ben Worthy looks at the data from previous ‘takeover’ prime ministers. He concludes that an election victory will free Theresa May from the short fate of other takeovers but won’t, in itself, help her secure a long or more stable premiership.

When Theresa May became Prime Minister in July 2016, she was the twelfth leader in the last 100 years who got to Downing Street through a party vote rather than a popular one. However, because of the divided parties and difficult situations that they often inherit, these ‘takeover’ Prime Ministers have less time in power and are generally rated as worse performing than those who win general elections – think Gordon Brown, James Callaghan and John Major. Their average time in power is 3.6 years compared with 6.6 for those elected by the people to office.

Is there a way out of this ‘takeover trap’? The normal assumption is that takeovers need an election win for their own security and so they don’t feel, as John Major put it, they are ‘living in sin with the electorate’. Despite her repeated denials, May has decided to escape her takeover fate and called an election for 8 June 2017. This is May’s (not so big) gamble, having gained Labour’s agreement to a vote on a motion for an early election under the (not so) Fixed Term Parliament Act – which has proved even less of barrier  to a snap election than many hoped. 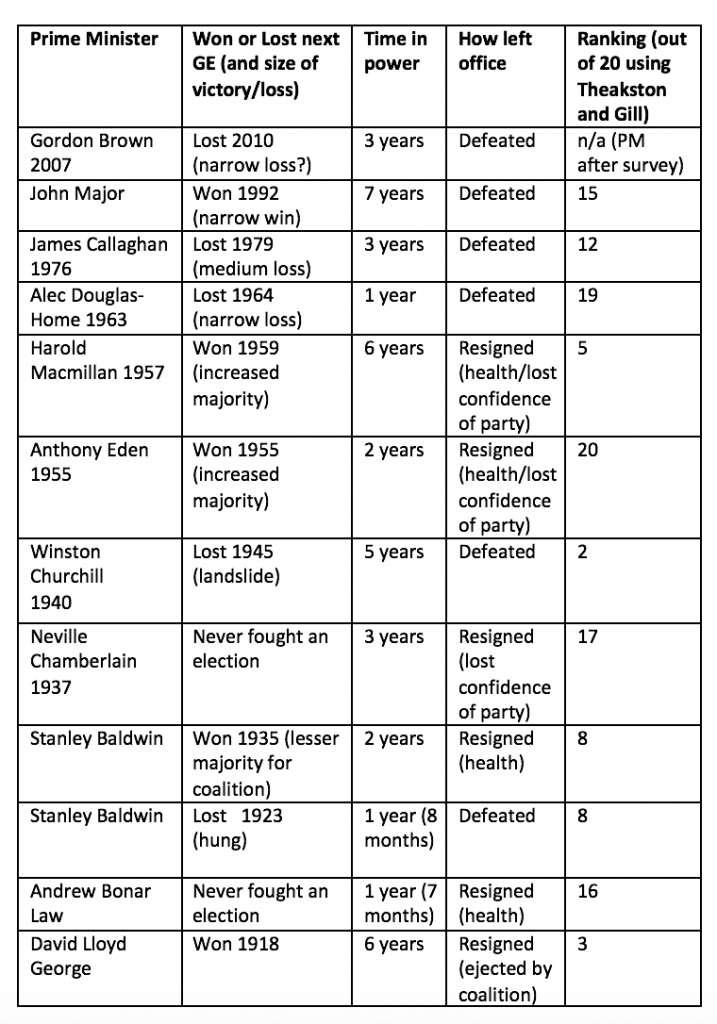 Looking at the past, such an election gamble didn’t always pay off. In the past century 5 takeovers have won and 5 lost their subsequent election (two never fought them). All but one of the takeover winners were more than fifty years ago. Since 1959 only one takeover, John Major, has won a General Election, and his victory in 1992 did not lead to political success.

If May increases her majority she’ll be the first takeover to do since Macmillan in 1959. Interestingly, no takeover has won more than one General Election, compared with 2 elected leaders who won 3 (Blair and Thatcher) and one who won four (Wilson). Perhaps even more notable is the fact that every takeover who won an election resigned before the next due election: Baldwin and Eden after 2 years, Chamberlain after 3 and Macmillan after 3 years and 3 months. By this calculation May has until June 2020.

In calling an election after only 9 months in power May has clearly bucked the historical trend, as most takeovers waited a while, and often waited too long (though Eden did it after just 9 days). Macmillan took four years from 1955 until 1959. All the other modern takeovers from Home to Callaghan, Major and Brown sought to hang on to the end of their term limit and to, as Churchill put it, ‘stay in the pub until closing time’. They all did this in the hope that their polling would improve. Poor polling is not a worry for May, though rumours have swirled that the CPS expenses investigation and possibility of Corbyn stepping down after the local elections did play a role.

The bigger question is whether the General Election will solve May’s problems. It appears likely an election will ‘crush Labour and make Brexit a little easier’ though there are, as ever, other possibilities and John Curtice has pointed out that a combination of SNP dominance, Northern Ireland divergence and safe Labours seats may stop a landslide. Unlike John Major, she will probably have a larger majority according to the latest polling.

Yet many other problems will still loom large on 9 June and the new May administration will inherit several rolling constitutional crises. Nicola Sturgeon could be gifted a stronger case for a second independence referendum and make good her prediction that a 2017 General Election is a ‘huge miscalculation’. The too long neglected divisions and stalemate in Northern Ireland looks set to worsen. The poll will also do nothing to solve the huge complexities of Brexit and, for the secretive May, any election campaign could drag the spotlight onto her Brexit plans, forcing her to reveal her hidden hand. So, an election victory will free May from the short, unhappy fate of other takeovers but won’t necessarily secure a long or more stable premiership. What could be historic could also prove Pyrrhic.

Note: The full paper Ending in Failure? The Performance of ‘Takeover’ Prime Ministers 1916-2016 can be downloaded here. 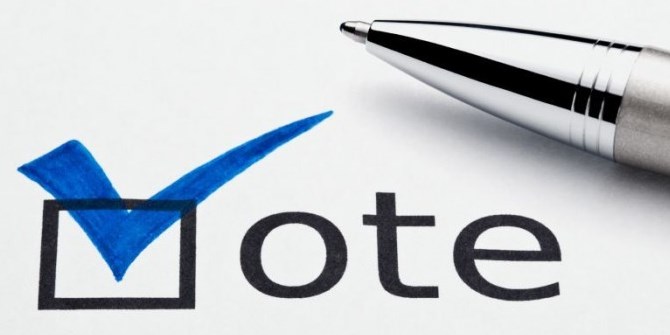