The link between geographic mobility and the reproduction of social class advantage is having a powerful effect in British society, write Katharina Hecht, Daniel McArthur, Mike Savage, and Sam Friedman. Based on an original study of changing social and geographical mobility into elite occupations, they explain why the tensions between London and the English and Welsh ‘provinces’ have deep roots.

There is great concern today about how increased levels of economic inequality might be translating into a broader social and cultural process of elites becoming increasingly aloof and removed from British society. Our report for the Sutton Trust addresses this concern with an original study of changing social and geographical mobility into elite occupations using the ONS Longitudinal Study. This tracks a 1% sample of linked census records of the population of England and Wales between different censuses (1971-2011), and since this involves over 500,000 members’ responses collected at each census, it offers an unusually granular account of mobility into elite occupations, (namely Class 1 of the National Statistics Socio-economic Classification denoting higher managerial, administrative, and professional occupations). We therefore have a powerful lens to reflect on social mobility into elite occupations.

There is an established mantra, most notoriously expressed in Norman Tebbit’s ‘on your bike’ comment made in the 1980s recession to encourage workers in depressed areas of the UK to move elsewhere to find work, and that those who are prepared to move to the areas with the best jobs will reap the highest rewards. In fact, the reality is much more complex than this.

There is little evidence that those who manage to gain access into ‘elite’ occupations from less advantaged classes do so only if they have the capacity to move geographically (Figure 1). The long-range mobile into elite occupations tend not to have moved location, and this tendency has not changed over time. Long-range social mobility is not dependent on being able to move. 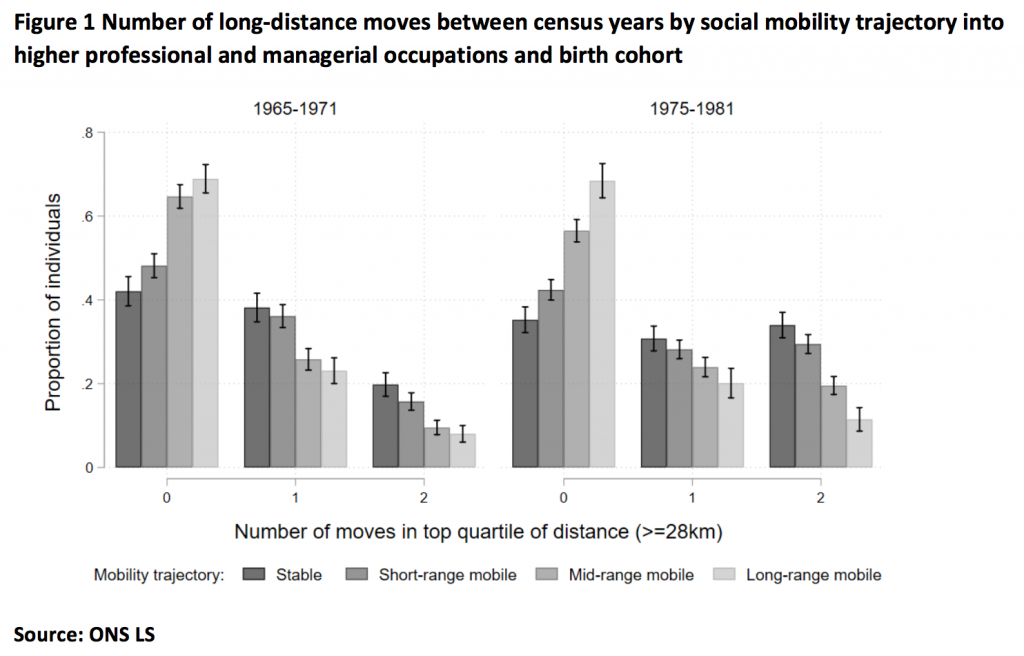 However, this does not mean that geographical mobility is irrelevant for social advance: far from it! A large majority of people with higher managerial or professional occupations, whose parents already held such privileged jobs, have moved long-distance at least once: a large majority of those who were long-range socially mobile into elite occupations have never done so. Therefore, geographic mobility is associated with the reproduction of social class advantage, instead of a common feature for those who have achieved upward social mobility.

The fact that those from privileged class backgrounds are much more likely to have completed either one or two long-distance moves by age 30-36 compared to those who were long-range socially mobile into higher managerial or professional occupations is telling, since this can unlock the greatest rewards, especially with respect to access to the London labour market.

We pay particular attention to  the role of London because the capital has strengthened its position as the elite epicentre. We found that moving to and living in London at age 30-36 and working in an elite occupation is increasingly associated with being from privileged background and significantly more so in the younger generation than the older cohort (Figure 2). Of all people with elite occupations born 1975-1981 who were not living in London at age 10-16 but did so at age 30-36, (a peak time for elite earnings as well as future promotion prospects), a tiny proportion – 5% – have been long-range socially mobile from working class backgrounds, whereas over a third are stable, and a staggering three quarters are either stable or short-range mobile.

Therefore, the people who achieved long-range social mobility success, are unlikely to have moved to London to enjoy its honeypot during their adult lives. Instead, they are most likely to move out of London in their later life. Their career success is the opposite of the Dick Whittington story: many poor kids leave London in order to get on. Alternatively, they achieved social mobility having never lived in London in the first place, or by having spent their childhood in London already and staying there through adulthood. By contrast, it is those from privileged backgrounds who are able to take the road to the metropolitan centre to pursue their elite careers. 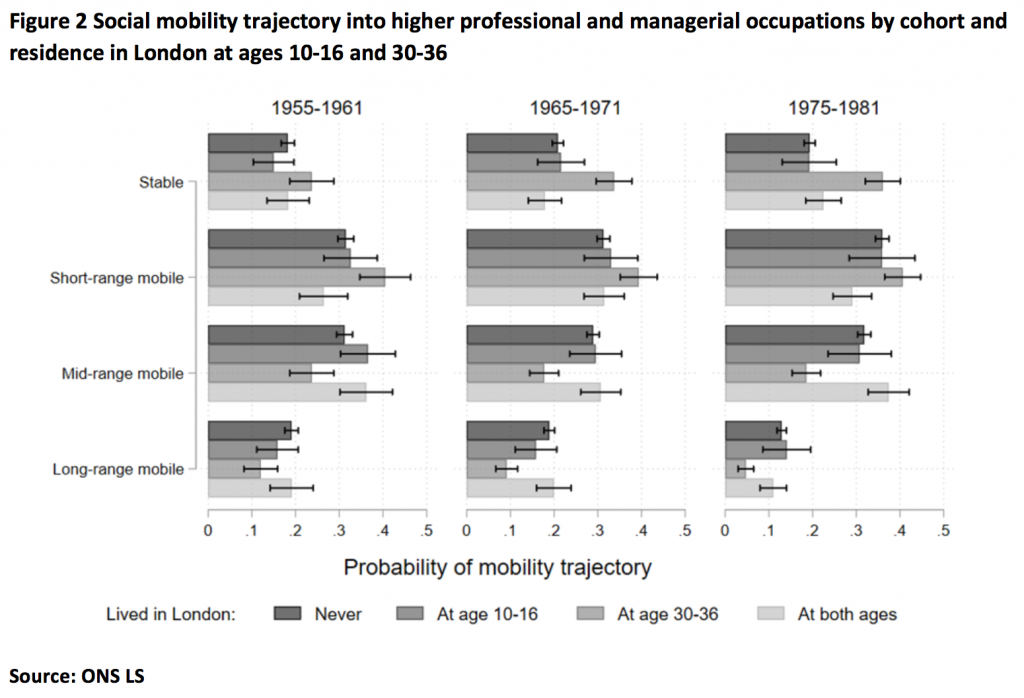 To conclude, it is the subtle relationship between social and geographical mobility which allows elites to pull away. Whilst it is possible for long-range social mobility into elite occupations to take place without moving far, the highest rewards in London tend to go to those from privileged backgrounds who are more likely to be long-range mobile. The link between geographic mobility and the reproduction of social class advantage is having a powerful effect in British society. The tensions between London as global elite epicentre, and the English and Welsh ‘provinces’, which came powerfully to the fore during the Brexit referendum, have deep roots indeed.

Note: This blog post is based on a report written at LSE’s International Inequalities Institute, funded by the Sutton Trust, and co-authored by Katharina Hecht, Daniel McArthur, Mike Savage and Sam Friedman.

Disclaimer: The permission of the Office for National Statistics to use the Longitudinal Study is gratefully acknowledged, as is the help provided by staff of the Centre for Longitudinal Study Information & User Support (CeLSIUS). CeLSIUS is supported by the ESRC Census of Population Programme (Award Ref: ES/R00823X/1). The authors alone are responsible for the interpretation of the data. This work contains statistical data from ONS which is Crown Copyright. The use of the ONS statistical data in this work does not imply the endorsement of the ONS in relation to the interpretation or analysis of the statistical data. This work uses research datasets which may not exactly reproduce National Statistics aggregates.

Katharina Hecht is a Postdoctoral Fellow at the Andrea Mitchell Center for the Study of Democracy at the University of Pennsylvania, and Visiting Fellow at the International Inequalities Institute at the London School of Economics.

Daniel McArthur is a postdoctoral research fellow in the Department of Politics and International Relations at Oxford University where he works on the ERC funded project ‘SCHOOLPOL – The Transformation of Post-War Education: Causes and Effects’.

Mike Savage is Martin White Professor of Sociology and Director of the International Inequalities Institute at the London School of Economics. He is author of ‘Social Class in the 21st Century’.

Sam Friedman is Associate Professor at the Department of Sociology at the London School of Economics. He recently co-authored ‘The Class Ceiling: Why it Pays to be Privileged’ and is also a Commissioner for the Social Mobility Commission. 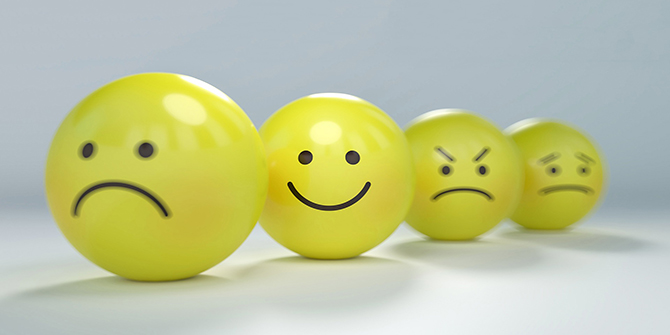