A new Facebook app lets you test-drive the Alternative Vote, and aims to show young voters that voting for change in the May referendum makes sense

A new Facebook app lets you test-drive the Alternative Vote, and aims to show young voters that voting for change in the May referendum makes sense

As the starting gun is fired on the first referendum campaign in 30 years, Barnaby Dawson introduces his brand new Facebook application, which lets users try out the Alternative Vote for themselves on fun, user-generated polls.

Learning how something will work before you’ve tried it, is always a far harder thing to do than just giving it a go. An abstract description of something in advance is usually no substitute for getting your hands on it and seeing how it works in action. 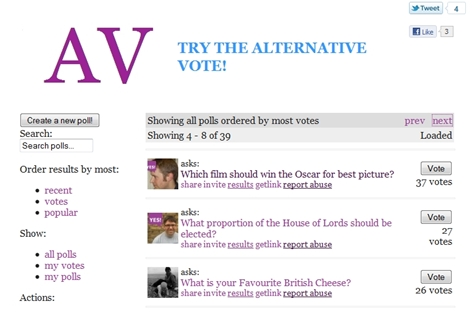 For example, one poll asks users which film should win the Oscar for best picture. They are prompted to rank as many or as few candidate films as they like, putting 1 for their top choice, 2 for second, 3 for third, and so on – just as voters will do with parties under the AV system. When a user clicks ‘vote’ their preferences and the preferences of other voters are calculated. If no candidate secures 50 per cent of votes then the candidate with least votes is removed from the race, and the second preference votes of people who supported that candidate are redistributed.  This process of eliminating the bottom place candidate still in the race is repeated until there is a clear winner; that is, a film that more than half of those polled want to see win.

The application not only shows the winner but also gives the proportion of ‘first-preference’ votes cast for each candidate film, which helps to illuminate how the Alternative Vote system works in practice. Other polls ask who is the best character in Star Wars, and the next display shows the results from a recent run of this online poll. 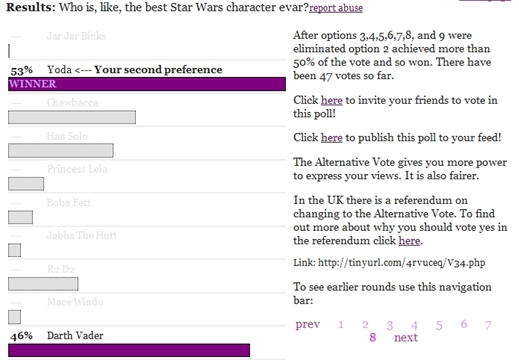 The ‘Alternative Vote’ application brings the AV debate to young people – typically one of the more disaffected voting groups. It will allow people online to easily ‘road test’ the new system that they can vote to choose or to reject. With an online campaign seen as crucial in swinging the 5 May vote, our hope is that seeing AV in action may help convince people that the issues involved in electoral reform are easy to get to grips with, and that the change open to UK voters is a worthwhile one to endorse.

To learn more about Unlock Democracy, please go to http://www.unlockdemocracy.org.uk/

This referendum is no longer about electoral systems, it is about taking sides and supporting the politicians that we most trust

We should stay with the first past the post voting system: it maintains the link between voter and elected MP, while AV makes it much less clear