New research by Alex Hurrell and colleagues at the Resolution Foundation examines the persistence of low paid work using a dataset that allowed those in low paid work in 2002 to be tracked to 2012. It found that 27% had remained in low paid work and that certain types of jobs did indeed appear to provide fewer opportunities for employees to escape low pay. Of particular concern was the finding that women appear to face additional barriers to pay progression, over and above these other factors.

It is generally acknowledged that the UK has a serious low pay problem. One in five employees were low paid in 2012, which compares poorly to other similar economies. But little is known about the persistence of low pay and consequently this is an under-developed aspect of the social mobility debate. This matters because many argue that, yes, there is a lot of low paid work but it overwhelmingly afflicts young people before they go onto earn more. But this view doesn’t tally with the fact that in fact many of Britain’s low paid workers are not young: almost half (47 per cent) are aged between 31 and 60.

Therefore our latest report, ‘Starting out or getting stuck?’, set out to shed  light for the first time on how many get stuck on low pay for significant periods of time.

Focusing on the period 2002 to 2012, and using data from the New Earnings Survey Panel Dataset (NESPD), we were able to identify those who were low paid in 2002 and then track this cohort over the subsequent decade. In this way we were able to identify those low paid workers who remained stuck on low pay over the period 2002-2012 (the ‘stuck’), those that had managed to escape by the end of the period (‘escapers’), and those that cycled in and out of low pay (the ‘cyclers’).

Using a standard definition, we consider low pay to be an hourly wage less than two-thirds of the contemporary median. Escapers are defined as those who were in employment and earning above low pay threshold in the final three years of the period (2010, 2011 and 2012). The stuck are those that only ever held low pay jobs between 2002 and 2012 (when employed). Due to data limitations they also include those switching between low pay and self-employment. The cyclers are those that were neither stuck nor managed to escape.

The chart below shows the relative sizes of these three groups. Almost one in five (18 per cent) of the low paid in 2002 had escaped low pay by 2012. This corresponds to around 800,000 people and four per cent of the 2002 workforce. Over a quarter (corresponding to 1.3 million employees) were stuck, while nearly half (equivalent to 2.2 million workers) cycled in and out of low pay over the period.

Taking the stuck and the cyclers together, we can see that almost three quarters of the low paid were unable to escape low pay on a sustainable basis over the decade.

Figure 1: Proportion who escaped low pay, cycled and remained stuck between 2002 and 2012 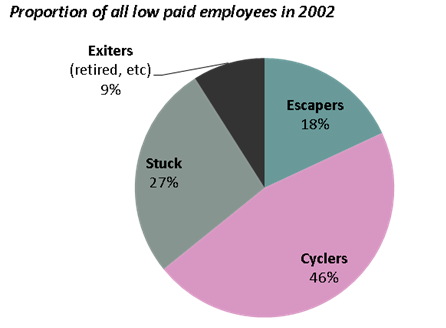 The table below illustrates the contrasting experiences of the three groups over the period 2002 to 2012. These workers, who were all low paid in 2002, went on to experience very different earnings trajectories in the subsequent decade: some never managed to progress out of low-paid work (the stuck), while others managed to progress significantly up the earnings scale (the escapers). In fact around half of those that managed to escape had managed to progress at least two-thirds of the way up the scale by 2012.

By comparing those who escape low pay with those who do not, we were able to identify the employment characteristics that were most associated with progression. What emerged is that certain types of jobs did indeed appear to provide fewer opportunities for employees to escape low pay. Those who remained working in hospitality, retail or manufacturing were less likely to progress, as were those in care, sales or elementary jobs such as cleaning or manual labour. Those who remained working for very small firms with fewer than 10 employees were also less likely to progress. In contrast, public sector workers were more likely to escape. Of particular concern was the finding that women appear to face additional barriers to pay progression, over and above these other factors.

So in summary, it is clear that for too many, low pay is a long-term reality, and crucially is not something that only afflicts people in the early stages of their careers. In fact of the 1.3 million people in 2012 who had been stuck on low pay for the previous decade, half were aged between 41 and 60, and had therefore spent up to a decade of their peak earning years in low-paying work. While some did manage to progress, the vast majority of low-paid workers, almost three-quarters, were unable to escape low pay over the decade 2002 to 2012.

The research suggests that, as things stand, for many low paid workers progression will require moving out of dead-end jobs. But does it have to be this way? Can we improve pay mobility within these ‘sticky’ industries and occupations, especially for those in very small firms? We see that low paid workers in the public sector were more likely to progress, so are there lessons from the public sector, such as the use of transparent pay scales linked to clear career paths that might be successfully transferred to the private sector? And are there policies in specific areas such as childcare and part-time working that could help to ameliorate the additional barriers that women appear to face?

Taking a step back, it is also important to recognise that policies to promote pay progression must be seen in the context of a larger discussion about what scope there is for policy to help the UK shift away from its current low-pay, low-skill equilibrium. Until this can be done, the sheer number of low-paid jobs in the UK labour market will ultimately always limit low-paid workers’ opportunities to progress.

Alex Hurrell is an economist specialising in social policy and analysis of poverty and inequality. At the Resolution Foundation he leads on the analysis of survey microdata and microsimulation work, including modelling the fiscal and distributional impact of changes to the tax-benefit system. Prior to joining the Resolution Foundation in March 2012, Alex spent seven years at Oxford Policy Management, a leading development consultancy specialising in public policy analysis and implementation in low and middle income countries, where he led the Poverty and Social Protection team. He has a first class BA and MPhil in Economics from the University of Cambridge.

‘Staged’ cracks in the coalition, debate over new GDP figures, and Cameron’s ‘Dear’ moment: Political blog round up for 23 – 30 April 2011