With the general election now no more than a week away, Gordon Brown’s ‘bigot-gate’ mistake could not have come at a worse time for the Labour party. Yet the impacts of this controversy and of tonight’s debate do not feature in the polls covered here. There is a small Tory increase to 34 per cent, but this is within their recent 33-34 per cent range that we have been tracking since last week. The Liberal  Democrats continue a slow glide downwards, with 28 per cent by our measure. And Labour itself had not yet suffered in the polls here, achieving parity with Clegg’s party at least. Sky’s measure is the same as our for Labour and the Liberal Democrats, but has the Conservatives edging up to 35 per cent, which is their highest level since the Clegg surge after the first debate.

How will yesterday’s and today’s events change the picture? We might expect to see some damage to Labour, although Brown will try to use the third and final TV debate to stem any losses. The Conservatives could widen their lead over Labour if Brown simply loses ground, but they have rivals in UKIP and the BNP who have been waging a very active campaign on immigration-focused issues at local level, largely undocumented by the national media. For example we show below a local UKIP leaflet which rather obsessively hammers at the issue in an overtly ‘anti-foreigner’ way that Cameron’s Conservatives have not followed and would not want to do. It is conceivable that any Labour losses might flow partly to these far-right parties, rather than to the Conservatives – whose local campaign leaflets are rather anaemic and uncontroversial. 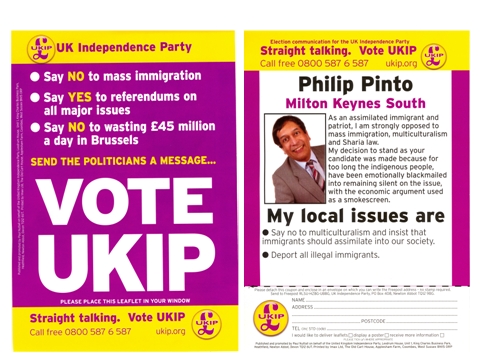 If immigration issues get a higher profile now then this may not help the Liberal Democrats either, since they are seen as perhaps the most ‘liberal’ party on this front. However, Nick Clegg might also look to gain vote share from any Labour decline, and the third TV debate will be important for him in trying to keep the race with the Conservatives as close as possible.