Another group that tends to be overrepresented in parliament in many countries, and the UK in particular, are humanities graduates. By contrast, relatively few parliamentarians have a so-called STEM (Science, Technology, Engineering and Maths) background. Our recent research finds MPs with STEM backgrounds prioritise different issues to the median MP, and therefore suggests that underrepresentation of STEM graduates and professionals in the House of Commons may be problematic.

Of the 541 MPs with higher education degrees in the 2015-2017 Parliament, only 93 (17%) held degrees in STEM subjects; for comparison, 46% of UK students in 2019 graduated in STEM subjects. This lack of scientific experience among MPs is at odds with the increasing pertinence of scientific issues and techniques to political decision-making. While an array of science-related issues, including climate change, security and privacy issues (related to the further growth of the internet), and sustainability of the healthcare system in the face of demographic change, are increasingly crucial to public policy, some commentators argue they risk being side-lined due to a lack of scientific expertise and interest among parliamentarians.

These arguments are premised on the assumption that having a STEM background significantly impacts the behaviour of parliamentarians. We studied this claim within the agenda-setting stage of policymaking and examined the proposal of Private Members’ Bills (PMBs) throughout the 2015-2017 Parliament to determine whether MPs with a STEM background prioritise ‘scientific issues’ in the agenda-setting stage of policymaking to a greater extent than MPs without scientific backgrounds. 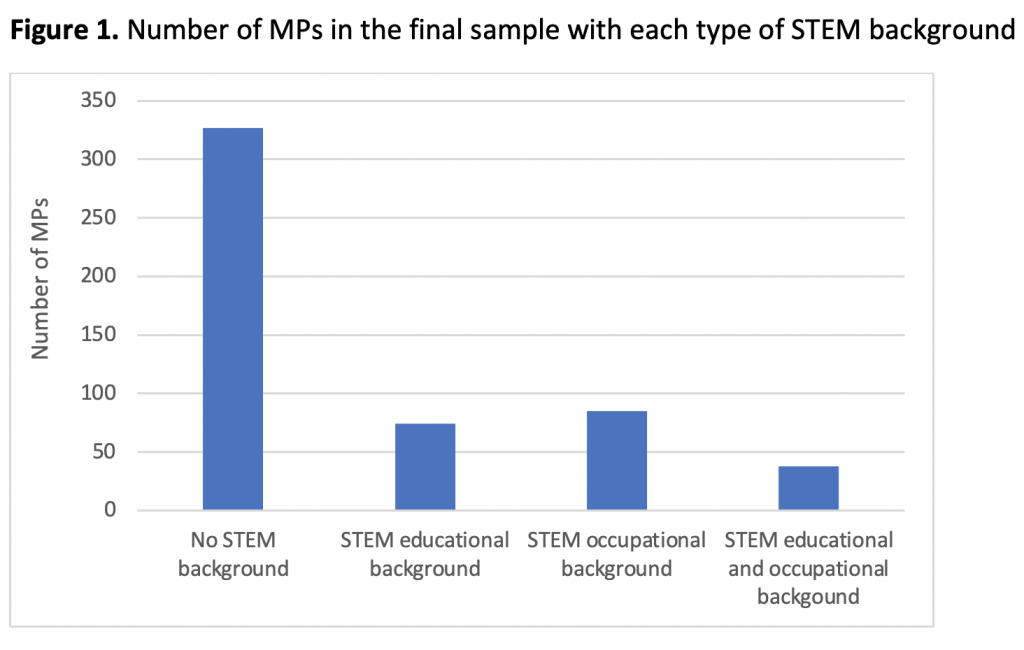 Multivariate analyses were run, controlling for an MPs’ gender, age, party affiliation, (shadow) ministerial roles, parliamentary experience and total number of proposed PMBs alongside the level of education and urbanization of their constituency. These analyses indicated that having a STEM background has no significant effect on the likelihood of an MP proposing a STEM PMB. This suggests that STEM and non-STEM MPs are equally likely to demonstrate a minimum level of engagement with STEM issues (proposing at least one STEM bill). However, we found that those with both an educational and occupational background in STEM tend to devote a higher proportion of their PMB proposals to STEM issues, signalling these issues are of greater interest and importance to them. All other things being equal, an MP with a STEM educational and occupational background is likely to offer 35% of their PMB proposals to STEM-related bills compared with 25% among those without such background.

Interestingly, distinguishing between presenters and co-sponsors of PMBs shows that this effect holds for co-sponsors but not presenters. This lends support to the thesis that, when proposing STEM-related bills, non-STEM MPs may seek to enlist STEM MPs as co-sponsors to bolster perceptions of scientific expertise associated with the bill.

We also found some interesting gender interactions, confirming theories and research on intersectionality highlighting how different background characteristics may matter differently for women and men’s policy preferences and priorities. As can be seen from Figures 2 and 3, among women, having a STEM educational background increases both the likelihood of proposing at least one STEM PMB and the proportion of PMB proposals an MP devotes to STEM issues. However, having a STEM educational background has the opposite effect on both counts among men. 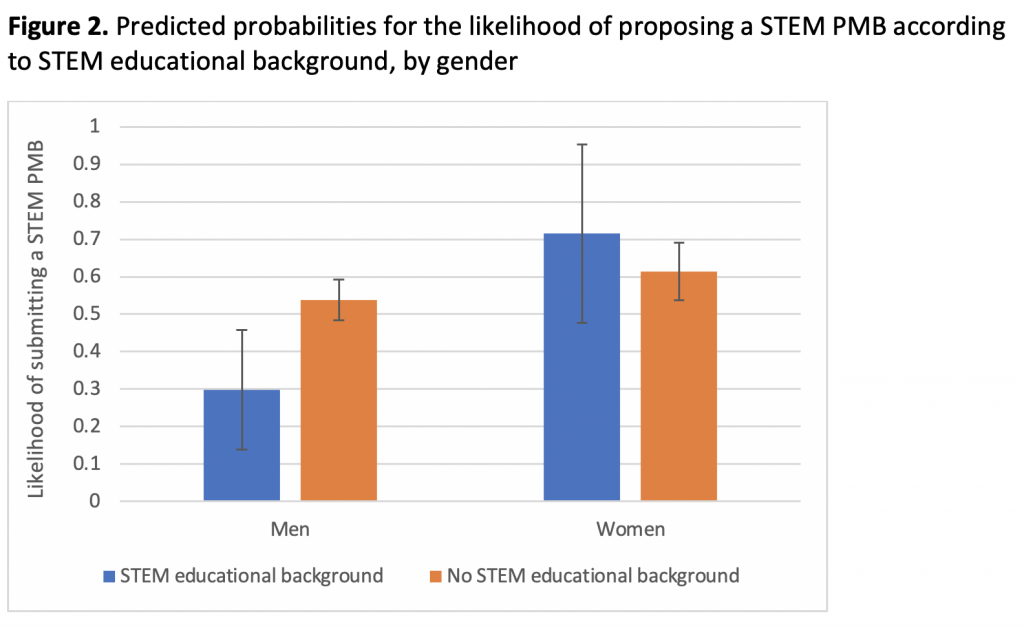 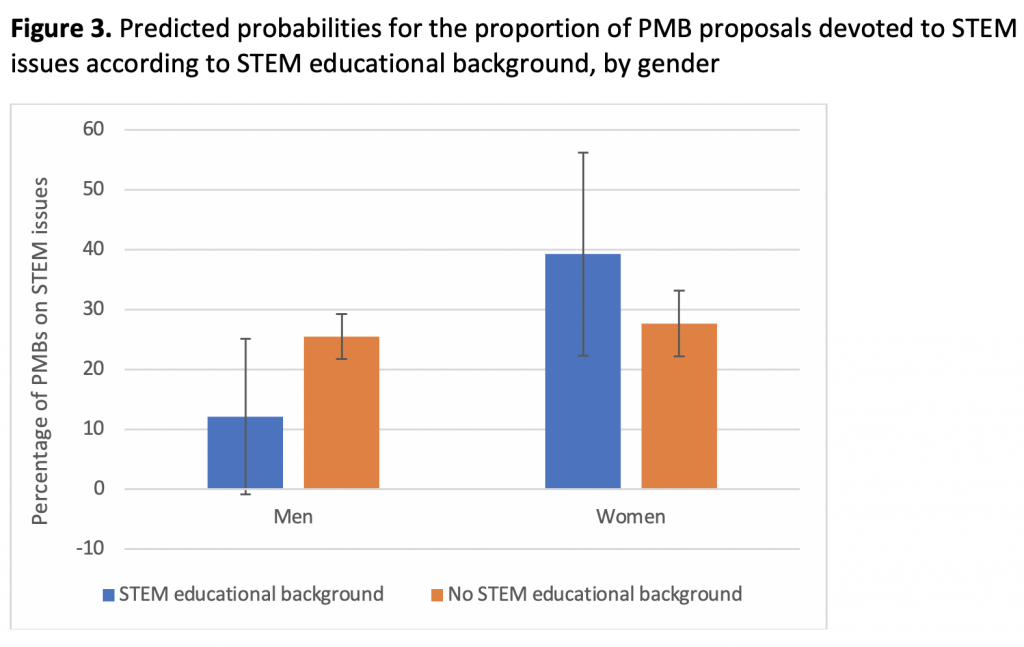 Two potential explanations may account for this gender pattern. Firstly, as widely documented, pervasive social norms and stereotypes often represent a barrier to women and girls studying STEM subjects and entering STEM occupations, leading to the significant underrepresentation of women in such fields. This might suggest that women who do choose to study STEM subjects and work in STEM occupations have greater interest in and passion for STEM issues than their male counterparts who did not have to overcome such barriers. Consequently, women MPs with STEM backgrounds may simply have entered Parliament with a greater interest in STEM issues than men with STEM backgrounds. A second potential explanation revolves around differences in the types of STEM background held by men and women and how these align with policy agendas. The majority of STEM PMBs (38 out of 58) proposed in the period studied related to life sciences, most notably healthcare policy; women MPs in our sample are more likely to have a background in life sciences (and especially healthcare) than male MPs. Whilst 13% of women MPs in the sample worked in an occupation related to life sciences and 11% studied life sciences subjects, the equivalent figure for men is 3% on both counts. Consequently, it is likely that having a STEM background has a greater effect on prioritising STEM issues among women MPs because they are more likely to have a background in the life sciences issues which predominate on the policy agenda.

Overall, we can conclude that in prioritising different issues, STEM MPs think differently to other MPs. In providing a balance of educational and occupational experiences which is more representative of the country at large, the election of more STEM MPs may therefore improve the cognitive diversity of the UK Parliament and associated policy outcomes.

Joshua Myers is a postgraduate student in the Department of Geography at University College London.

Hilde Coffé is Professor in the Department of Politics, Languages and International Studies at the University of Bath.

Photo by Fakurian Design on Unsplash. 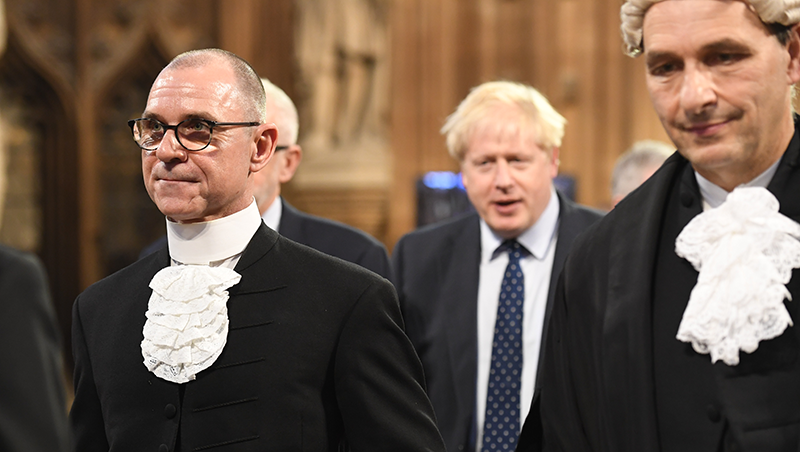 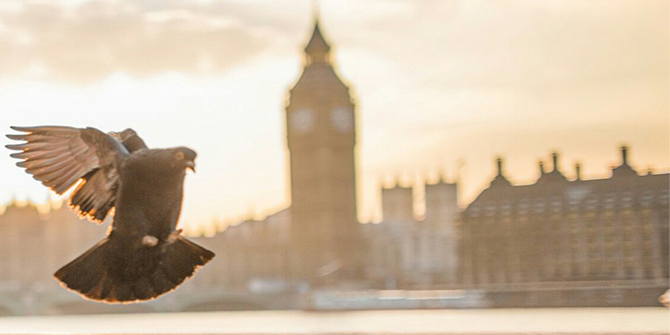