Ron Johnston argues that much of the debate on tuition fees is misleading. Not only is the size of the debt incurred by students persistently understated but the repayment system is itself regressive. The greater your rewards from studying for a degree the less you pay for the opportunity. This has profound consequences for postgraduate education and recruitment to the professions.

On 6 January 2013 The Independent on Sunday reported that a number of UK university vice-chancellors and other senior academics had expressed great concern about the absence of financial support for, and thus problems of recruitment to, taught masters’ courses – many of which provide necessary training for a range of (mainly) public-sector professions rather than introductions to fundamental research. On the same day, The Observer carried a major article by Will Hutton (Principal of Hertford College, Oxford) on that issue, rightly associating those difficulties with the amount of debt students will have accumulated at the end of their undergraduate degrees. Unfortunately, like so many  others, he did not fully address the nature and extent of such debts, nor the misleading representations of the repayment system from both the politicians who implemented it and many subsequent commentators.

The details needed to make a full assessment are readily available from the ‘student loans repayment calculator’ on a government website. Although it makes some pragmatic assumptions, such as at what rate individuals’ post-graduation incomes increases and future rates of inflation, the information provided is sufficient to generate a clear conclusion: the extent of the debts students graduating from 2015  onwards will be carrying is not only often understated but in addition the repayment system is regressive according to income and not progressive, as frequently claimed.

The larger your starting salary above a threshold, however, the less you pay back in total – and in a shorter time. According to the ‘student loans repayment calculator’, somebody who ‘borrowed’ £27,000 for the fees and whose starting salary is £25,000 repays a total of £57,526 over 17 years and 8 months; with a starting salary of £30,000, the repayment period is 13 years, 9 months and the total repaid is £50,943; and for a starting salary of £40,000, only £44,354 is repaid – over a period of just 9 years and 9 months. The conclusion is clear: the less well-paid you are when you enter the labour market, the more your degree costs, both relatively and absolutely – and not the other way round.

David Willetts and others have claimed that the repayment system is, in effect, better than a graduate tax: on page 18 of BIS’s June 2011 White Paper Students at the Heart of the System, for example, we are told that the proposed system of graduate contributions ‘preserves a careful balance between the interests of higher and lower earners, by requiring higher earners to make a fair contribution to the costs of the system as a whole’ and that because ‘all graduates will pay less per month than under the old system, … higher education [will be made] more affordable for everyone’! Furthermore, the better-paid (and those from wealthier backgrounds) can pay off their debt immediately on graduation, at no cost – a further regressive element to the system; or they can pay the full fees upfront.

All this is built on assumptions regarding not only the rate of inflation (the higher it is, the larger your debt) but also increases in the graduate’s income over time, plus any change in the repayment threshold. A graduate with a starting salary of £21,000 is assumed to be earning £41,000 thirteen years later, with increases of up to 15% in the early years, falling to about 5%. (The source for the government website’s calculations is an Office for National Statistics analysis of Labour Force Survey data) If income grows more slowly, the debt accumulates even more, the repayment period is longer, and the total repaid also increases – which again disadvantages the lower-paid. Another website  allows further experimentation with varying rates of salary increase and inflation; the conclusions developed here do not change, only the inflexion point in the graphs discussed below.

These calculations all assume that the student doesn’t take out a maintenance loan – a maximum of £7,675 per annum for those living away from home and studying in London. If you also take out that loan for three years (and do not qualify for any support because of low parental income), the government’s calculations show that for graduates with a starting salary of £21,000 the initial debt is £56,924 (not the £50,025 ‘borrowed’). It grows until the 26th year of continuous earning (when it stands at £101,976); repayments stop after 30 years (after which any remaining debt is wiped), by when the full sum remitted has been £114,418. Someone whose starting salary is £30,000 has a peak debt of £67,457 after 10 years; the full amount is paid off after 23 years and 9 months, with the total costs of the package being £135,914. And the graduate with a starting salary of £40,000 makes repayments totalling just £104,105 (23% less than that for the person whose starting salary is £10,000 lower), completing the process in only 16 years and one month.

Those whose starting salaries are low are protected, therefore. The government assumes a minimum income once the graduate enters the labour force of £15,795: somebody earning that amount who takes out loans for both fees (£9,000) and maintenance (£7,675) repays £56,041 over 30 years, by which point the amount owed has increased from the initial sum of £56,924 to £136,304 – when it is wiped out. The system is progressive in its impact for those with the lowest starting salaries, therefore, but above £21,000 it becomes regressive because of the single ‘tax rate’ (and despite the link between income and a varying interest rate on the accumulating debt): so, the greater your rewards from studying for a degree the less you pay for the opportunity (or, as the Institute of Fiscal Studies concluded in its 2010 evaluation of the government’s proposals: the scheme ‘does benefit poor students, [but] it does not benefit poor graduates’). 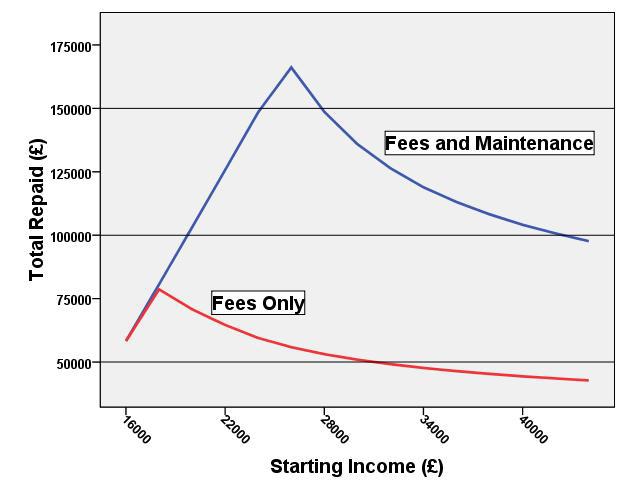 The graph above shows just how large the differences are, especially for students who take out loans not only for fees but also for the maintenance grant: it contrasts a student who has a fees-only loan for three years and another who in addition takes out the maximum maintenance loan for studying in London. Starting incomes from £16,000 to £44,000 are shown; all of the data are taken from the ‘student loans repayment calculator’. If a student takes out a fees-only loan, then the total amount repaid falls once the starting income exceeds £18,000. For the student studying in London who also takes out a maintenance loan, the amount repaid increases with the starting salary until that reaches £26,000, and then begins to fall; somebody with a starting salary of £44,000 pays back less for the same amount ‘borrowed’ (£50,025) than somebody with a starting salary just above £20,000.

No wonder that Vice-Chancellors are worried about the future market for postgraduate masters’ degrees. Even if loans were available for those courses, how many students would avail themselves of such opportunities, given the debts they are carrying from their undergraduate education – especially if they want to work in the relatively poorly-paid professions like social work? Society as a whole should share their concern – where are the next generations of entrants to many of our (under-rewarded) professions to come from given this unfair burden?

(With many thanks to Rich Harris, Kelvyn Jones, Dan Lunt, David Manley and Ed Thomas for illuminating discussions of these issues.)

Posted In: Higher Education | Public Services and the Welfare State