A key part of the text that glues David Cameron and Nick Clegg together is the commitment to hold a referendum on introducing ‘the Alternative Vote’. But Patrick Dunleavy argues, there are two forms of this system, with very different implications for British politics. Should voters be allowed to choose which they want?

Some of our readers have asked – why do we have to have a whole referendum restricted just to a choice between the status quo ‘first past the post’ voting system for MPs and the Alternative Vote? The is a simple answer – we have to have a referendum on ‘Alternative Vote’ because this is what the Conservative-Liberal Democrat coalition agreement says must happen. Without honouring this pledge, the coalition cannot continue in being. The government has now announced a fast track route to the referendum and the Electoral Commission has already asked for tenders on research on the question wording to be put to the electorate.

One key issue that does not seem to have been considered by Nick Clegg’s office is exactly what a commitment to ask about the ‘Alternative Vote’ means? Most people think of the Australian version of AV described in our Simple Guide to Electoral Systems. But there is a simplified and British version of AV that has been used very successfully in London to elect the Mayor (where it is sometimes called the Supplementary Vote). Here people can express a first preference (marking an X in a first preference column) and a second preference (marking a second X in their second preference column. They do not need to use numbering, which makes it easier to run this voting method alongside other elections that use X voting – like the European Parliament, Scottish and Welsh Assembly, the London Mayor and Assembly elections, and the English local government elections. 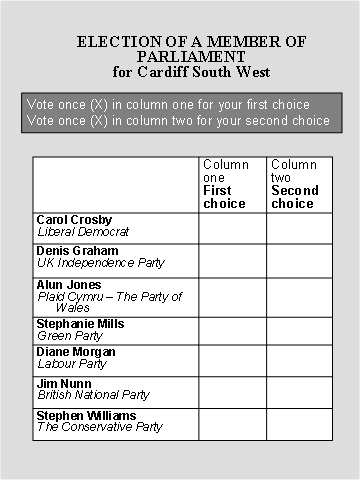 The London form of AV also has the great advantage that it creates a run-off between the top two candidates in a local constituency – only one of them can win.  By contrast it is theoretically possible that under the Australian form of AV, candidates initially placed third, fourth or even fifth in the electorate’s first choice preferences could none the less end up defeating higher order candidates. What is more, the views of people who cast many preferences by numbering all the candidates can have more weight in determining the result than people who only cast a couple of preferences.

Ballot paper for the Australian form of the Alternative Vote 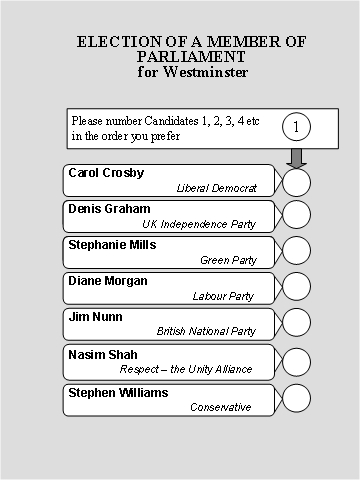 This might seem unlikely – and it rarely happens in Australia. But when you are making constitutional decisions, you have to plan for the long term (indeed for ‘all time’) and to plan for all possible contingencies. So although the referendum has to be on some form of AV, should it be on the Australian form of AV, or the London form  – perhaps we could vote on that!

How might the parties line up on this issue? The Liberal Democrats will be immediately suspicious, because part and parcel of their secret wish is that once people get used to numbering candidates 1, 2, 3, 4 etc. then it will in future be an easier sell to the public for the Lib Dem favourite voting system – the Single Transferable Vote (STV). For a quick description, see our Simple Guide to Alternative Voting Systems). STV uses numbering of candidates too.

Yet the Conservative opposition to AV is premised on the same belief – this time a deep dread that AV will be the thin end of the wedge for fully proportional voting system. Yet if the vast bulk of Tories and the Conservative press campaign in full flood for a ‘No’ vote in the referendum, the coalition’s prospects will look distinctly shaky – whether the reform passes of fails. If it passes, Cameron will come under huge pressure from his right wing for more distinctive ‘blue water’ policies. If it fails, the Liberal Democrat grass roots are staring at another sterile period of campaigning against the weight of the current voting system, maybe for another two decades or more if the reform loses badly.

Could shifting the meaning of ‘Alternative Vote’ to embrace the London version of the system solve the conundrum for ministers? Opposition from Tory MPs would surely be massively reduced. The example of Boris Johnson’s success in winning the London mayoralty, and the restriction of potential winners to the top two parties, would blunt the fears of AV as a thin end of the wedge. Labour support for reform would also increase – after all they introduced the London form of AV.

The London version of AV does everything that the Australian version of AV does, and does it better. Most MPs will still need to reach out to people in other parties to win a local majority within their constituency. Their democratic legitimacy would be vastly increased, as the London mayors (Ken Livingston and Boris Johnston) have found. Every MP would be the authentic voice of their area once again. That is the key prize to win, and a shift to the London form of AV might guarantee that it can indeed be won.

Constitutional reform – what the three parties are promising