As the North Atlantic Treaty Organisation celebrates its 70th year, Ben Clements analyses evidence on the views of the British public towards the alliance. He finds that, over time, Britons have generally been consistent in supporting NATO.

Public opinion towards NATO has been given added topicality in recent years for several reasons. First, worsening relations between NATO countries and Russia over Ukraine and more general tensions over aspects of international policy. Second, controversial pronouncements made by Donald Trump, including labelling NATO as ‘obsolete’ – a view which he subsequently renounced – and expressing firm views – also voiced by his predecessors using more diplomatic language – on the need for other members to increase their defence spending. Third, Jeremy Corbyn’s leadership of the Labour Party has given rise to more scrutiny of his views on foreign and defence policy. But what does the British public think of NATO?

A long-running question gauged British public opinion towards NATO’s role as a security alliance in the Cold War period: ‘Some people say that NATO is still essential to our country’s security. Others say NATO is no longer essential to our country’s security. Which view is closer to your own?’ Figure 1 charts the responses for Britain between 1967-91. It shows that large majorities of the public consistently thought that NATO was essential for this purpose during the Cold War period: lowest at 59% in 1967 and highest at 81% in 1971. The proportion taking the opposite view was highest in 1982 (at 25%) but otherwise registered at lower levels, ranging between 8-16% over time. The remainder of the public, a fluctuating minority, were unsure. 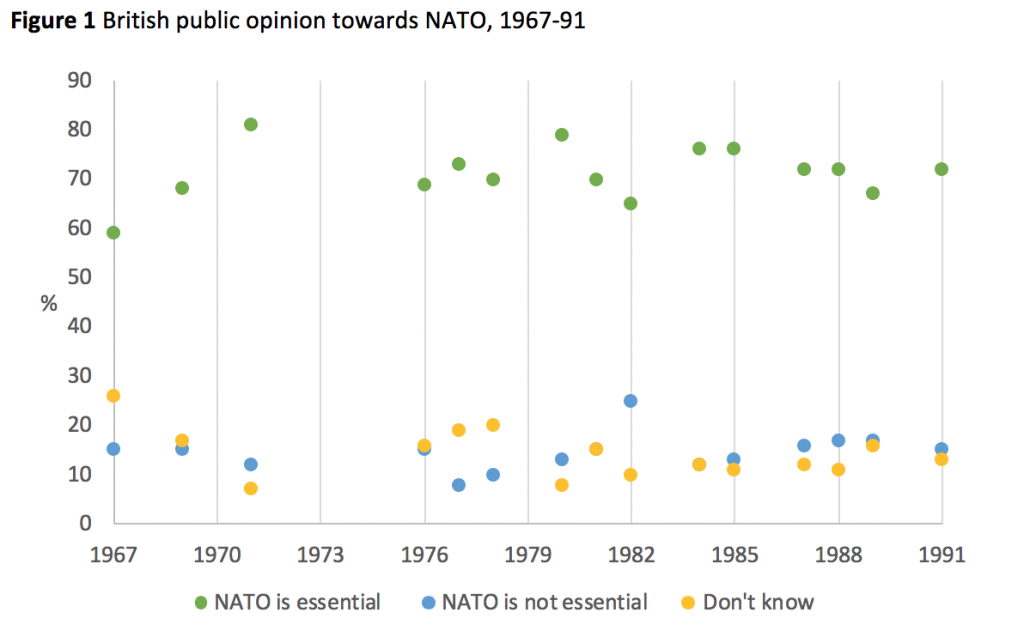 The British Social Attitudes surveys provide some limited data on support for membership during the 1980s, based on a question asked between 1983-90: ‘Do you think Britain should continue to be a member of NATO – the North Atlantic Treaty Organisation – or should it withdraw?’ During the last decade of the Cold War era, large and stable majorities of the British public favoured membership, ranging between 74-81%. Only very small proportions favoured withdrawal, between 10-15%. So, during the Cold War, large majorities of the public consistently affirmed their support for membership of NATO and its role in protecting national security.

Have public stances changed in the post 9/11 era? Cross-national survey series shed light on this question. First, a question on NATO has been asked in Pew Global Attitudes Project surveys between 2009 and 2017: ‘Please tell me if you have a very favorable, somewhat favorable, somewhat unfavorable, or very unfavorable opinion of … NATO.’ The proportions of the British public with favourable (combining ‘very’ and ‘somewhat’) or unfavourable (combining ‘very’ and ‘somewhat’) views are shown in Figure 2. Positive views of NATO have been broadly stable amongst the British public, in the range of 60-64%, with opposition around or below 20%. Favourable views of NATO have been around three times as common as unfavourable views. 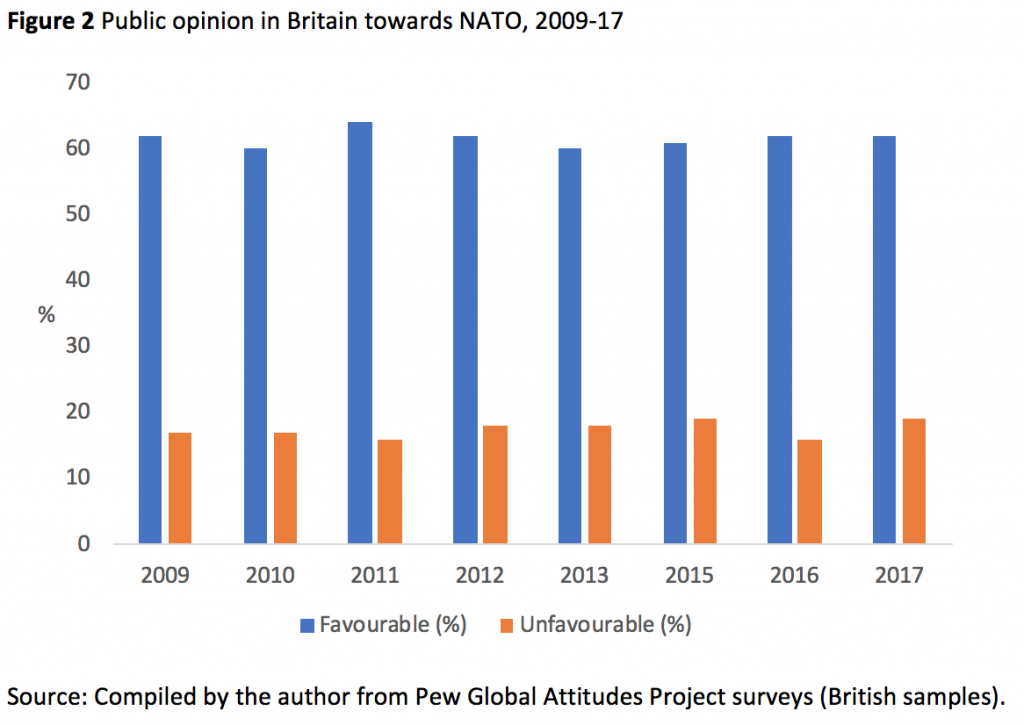 Second, a question was asked on the Transatlantic Trends surveys between 2002-14, which sampled the UK public amongst other countries: ‘Some people say that NATO is still essential to our country’s security. Others say it is no longer essential. Which of these views is closer to your own?’ The proportions of the UK public saying NATO is essential or is not essential for national security are shown in Figure 3. Public opinion is broadly similar in profile to that seen in the Pew GAP surveys – over time, clear majorities have viewed NATO as essential for national security, albeit the size of the majority fluctuates. 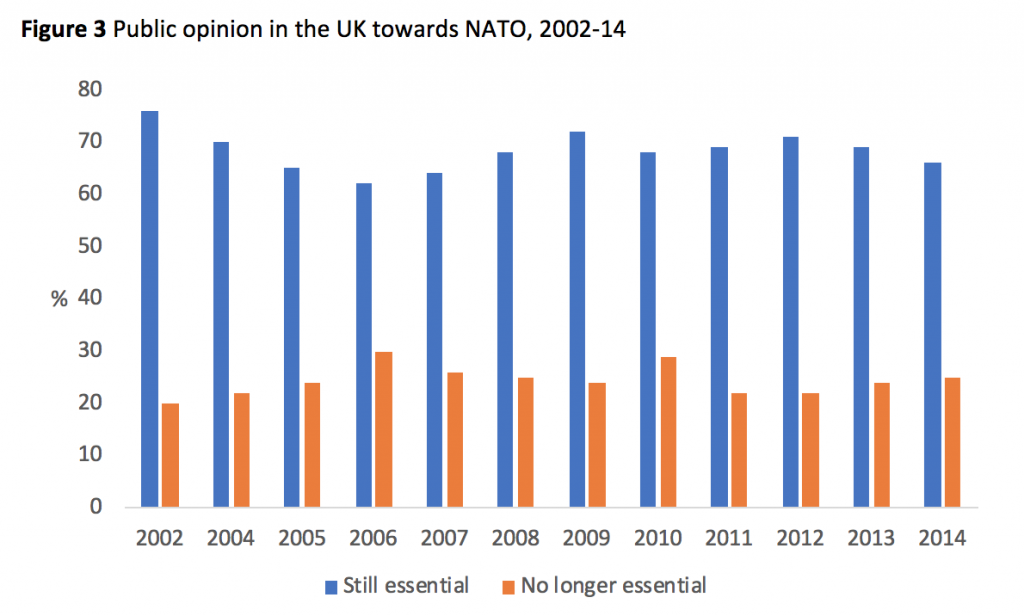 The levels of support seen more recently affirming NATO’s perceived essential role for national security are, therefore, broadly in line with those expressed by the British public in the Cold War period. The proportions disagreeing have ranged between 20-30% and those unsure have been lower still.

Evidence on group-related views towards NATO can be analysed using the Pew GAP 2017 survey. Within a range of societal groups (based on sex, age group, educational attainment, party support, and left-right ideological orientation), Figure 4 shows the proportions that were favourable and unfavourable towards NATO. In broad terms, majority support is evident across nearly all groups and easily outranks negative opinion. That said, there is some evidence of variation in positive opinion across social groups. Favourable views are more common amongst men than women (67% versus 57%). The younger age groups (18-29, 30-44) registered somewhat lower levels of favourable views, at 55% and 57%. Amongst the older age groups, around two-thirds have favourable views of NATO. Based on educational attainment, positive views of NATO were more prevalent amongst those with (at least a) degree, at 73%, compared to those with other qualifications and those with no qualifications (respectively, 59% and 60%), 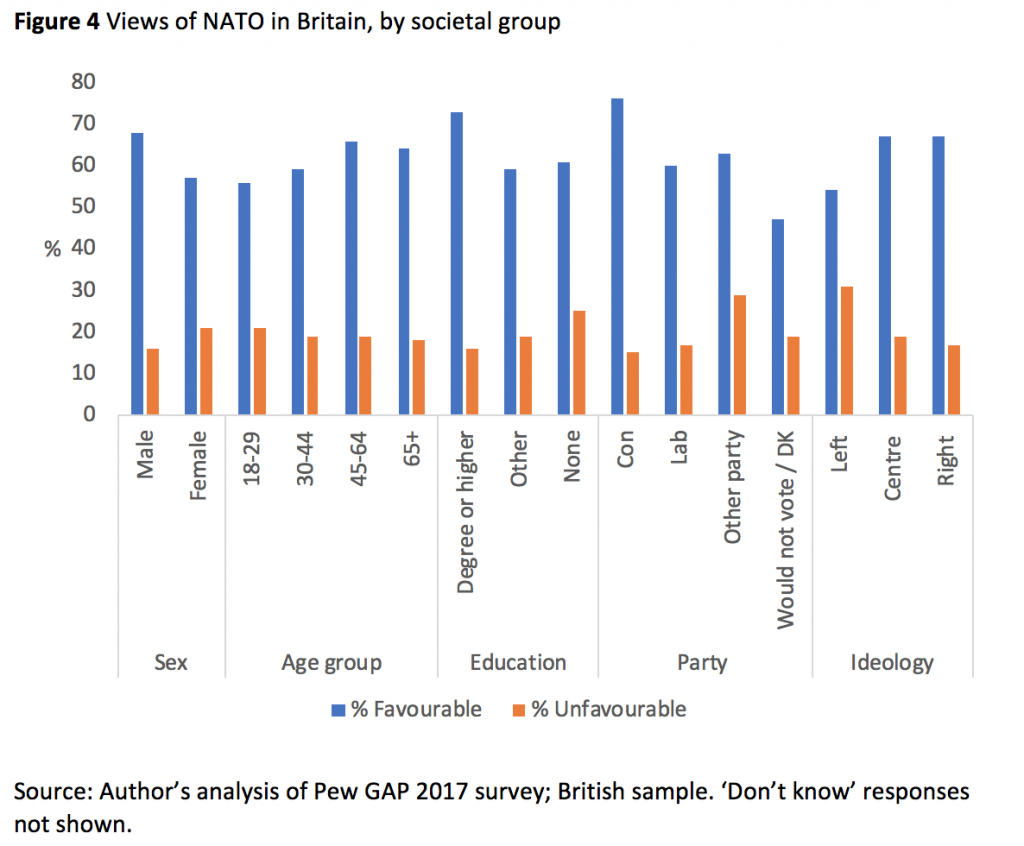 Based on party support, 76% of Conservative backers have positive views of NATO, higher than the 60% of Labour supporters. The Pew GAP surveys between 2012-2017 show that Conservative views of NATO have tended to be somewhat more favourable than those of Labour supporters. In 2017, 63% of supporters of other parties held favourable views, which declines to 45% amongst those who would not vote or did not know (34% in this group were unsure of their view). Favourable views of NATO are highest amongst those in the ideological centre (at 67%) and on the right (68%), compared to 55% of those on the left. There is variation in negative views based on ideological location, with those on the left (32%) more critical than those in the centre (20%) or on the right (17%). Indeed, those on the ideological left express the highest level of opposition of any societal group.

Across the decades, evidence drawn from a plurality of survey sources shows that, in the aggregate, the British public has been generally supportive of the country’s involvement in NATO and has valued its role as a security guarantor during the Cold War and afterwards. When contemporary public opinion is disaggregated, it is also clear that positive views of NATO significantly outweigh negative appraisals across social and political groups in wider society.

Ben Clements is Associate Professor in the School of History, Politics and International Relations at the University of Leicester. The above draws upon research from his latest book, British Public Opinion on Foreign and Defence Policy: 1945-2017 (Routledge). 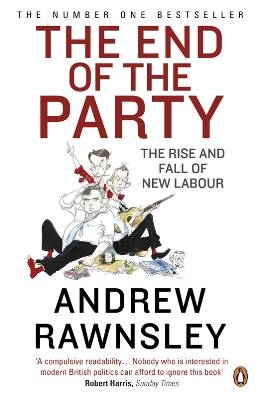 Book Review: The End of the Party: The Rise and Fall of New Labour