Matthew Whittaker explains how the spending restraint of the austerity period and the political priorities pursued by successive governments have placed major strain on a number of public services. He argues that, as a result, the size of the state has changed over the past decade and so too has its shape.

Political consensus is a rare commodity these days. But following a decade of austerity, and with borrowing costs at historical lows, a severe bout of accord has broken out across the big political parties about the efficacy of turning the spending taps back on.

With the party manifestos now published, we can see just how significant spending ambitions are. Analysis from the Resolution Foundation suggests that Conservative plans involve pushing government expenditure to around 41% of GDP over the course of the parliament, whereas Labour’s manifesto sets a course to 45% of GDP (with the Lib Dems sitting somewhere in between). That leaves a big gap between the big two, equivalent to more than £100 billion a year – the consensus only stretches so far it seems. But stepping back, the bigger point is that the two biggest parties are plotting a significant change of direction relative to recent years: spending averaged just over 37% of GDP in the quarter century leading up to the financial crisis. As the chart below suggests, the size of our state appears to be heading back towards 1970s levels, whoever forms the next government. 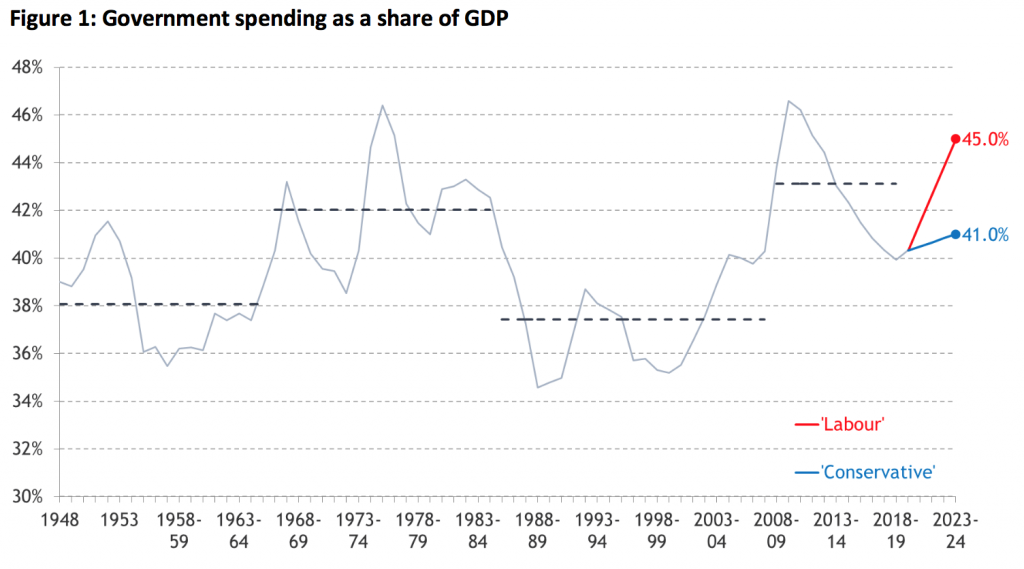 But the backdrop to the plans also matters. More specifically, it is worth reflecting not just on how the size of the state has changed over time, but also its shape. Spending priorities naturally move over time, reflecting shifts in political, economic, and demographic backdrops. Yet the changing role of the UK state has been particularly pronounced over the course of the austerity decade, with the prioritisation of some key aspects of spending within a tight overall budget inevitably squeezing resources for many functions.

Departmental spending has been particularly constrained – reflecting the fact that it is the element of spending that government has most control over. And within that restricted departmental total, an increasing share has gone to health and international aid, leaving many other departments facing very sizeable reductions in spending.

As the next chart shows, the local government budget is on course to have been cut by 77% in 2020-21 relative to a 2009-10 baseline when measured on a per-capita basis. Other departments have fared only a little better, with real-terms per-capita spending down by a half in Housing and Communities, Transport and Work and Pensions, and by a third in Scotland, BEIS, DEFRA and Justice. 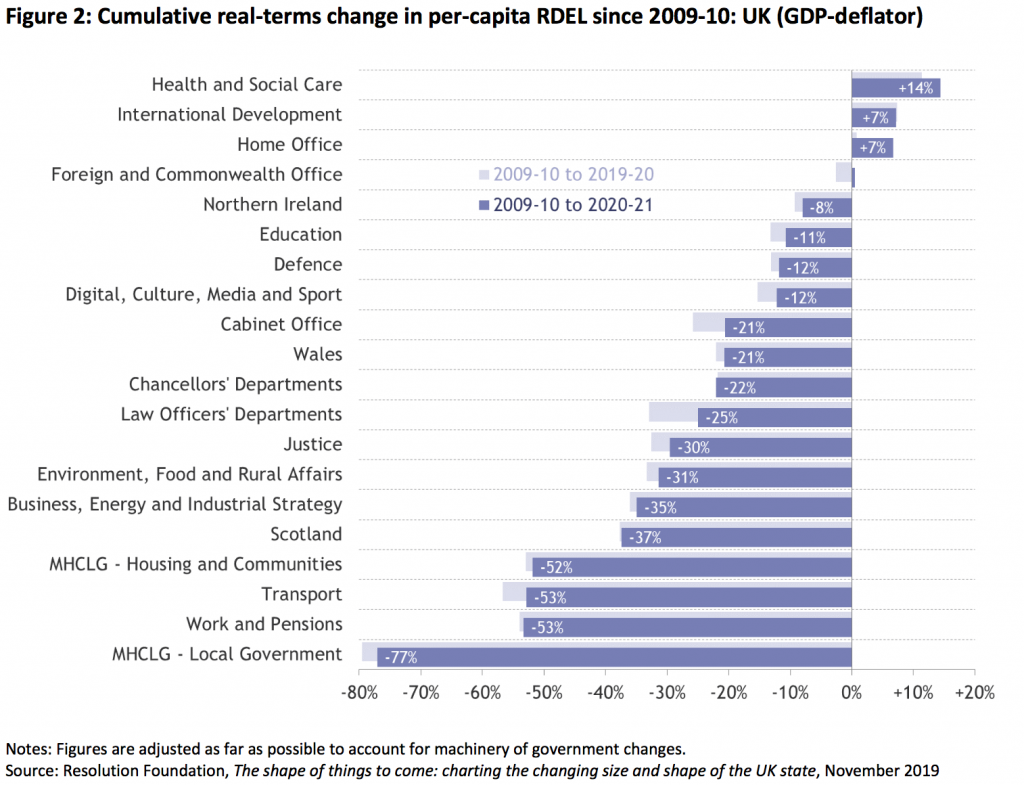 In contrast to the shrinking departmental total, spending on social security has risen in real terms over the last decade or so. But there have once again been some big changes in the profile of that spending. Expenditure has shifted increasingly from working-age welfare to pensioner payments: a change that has been driven not by demographic change (with the rising State Pension age pushing back against the ageing of the population in recent years), but by deliberate policy choice. More specifically, the introduction of the ‘triple lock’ in 2011 (whereby the value of the State Pension grows each year by highest of inflation, earnings or 2.5%) alongside roughly £12 billion of cuts to working-age benefits has led to a situation in which the State Pension now accounts for 44% of all welfare spending, up from 37% just ahead of the financial crisis.

The next chart brings all this together, focusing on how overall government spending splits across different functions. By far the biggest growth over the last two decades relates to ‘old age’ social security spending and to health spending. Taken together, these two functions have gone from accounting for 29p of every £1 spent by government in 1997-98, to 33p in 2007-08, and 37p in 2018-19. The share of spending flowing to many other functions – including defence, public order and safety, and housing and community services – has been correspondingly squeezed. 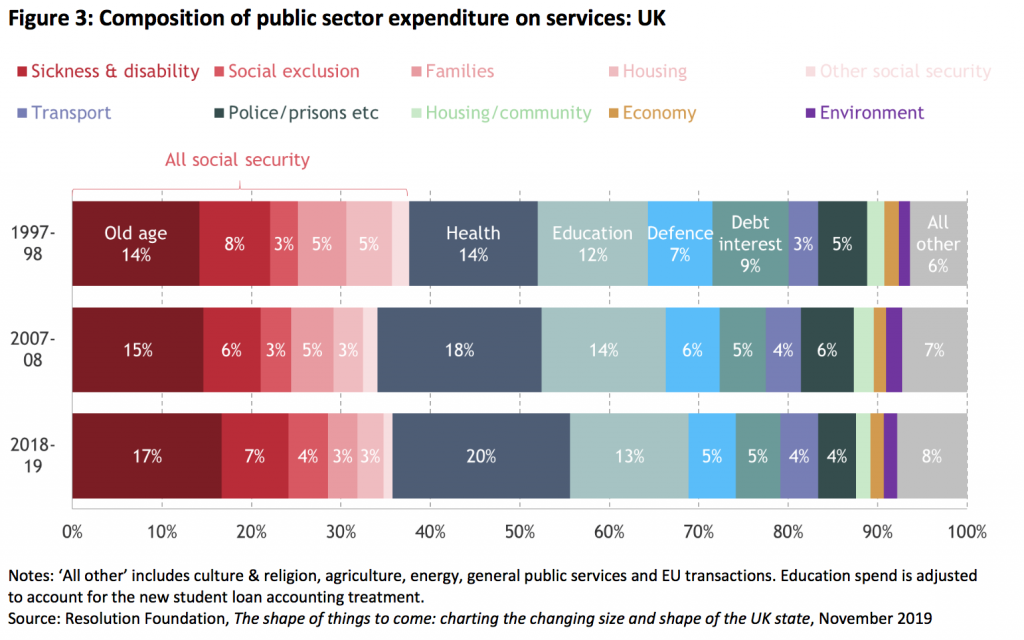 It is of course up to the government of the day to determine where public spending should be directed. But the suspicion is that at least some of the recent shift is the product of a series of politically pragmatic decisions taken in isolation as part of the austerity agenda, rather than a carefully crafted strategic overview. As a country, we haven’t ever stopped and asked ourselves what the state is for, yet we have just lived through a significant reshaping of its role. That matters because demographic forces are set to steer the UK state further down the path already struck out on as a result of policy decisions over the last decade. Absent any further policy change, our ageing population will significantly increase the share of spending accounted for by health and old age social security.

The next chart plots the policy neutral outcome associated with the Office for Budget Responsibility’s long-term projections. It shows that old age social security and health expenditure could together account for half of all non-debt interest spending by 2067-68. Within this, health spending on its own could account for close to one-third of the total. In contrast, the share of total spending accounted for by non-old age social security drops from 19% in 2017-18 to 13% in 2067-68. And the share flowing to education falls from 13% to just 9%. 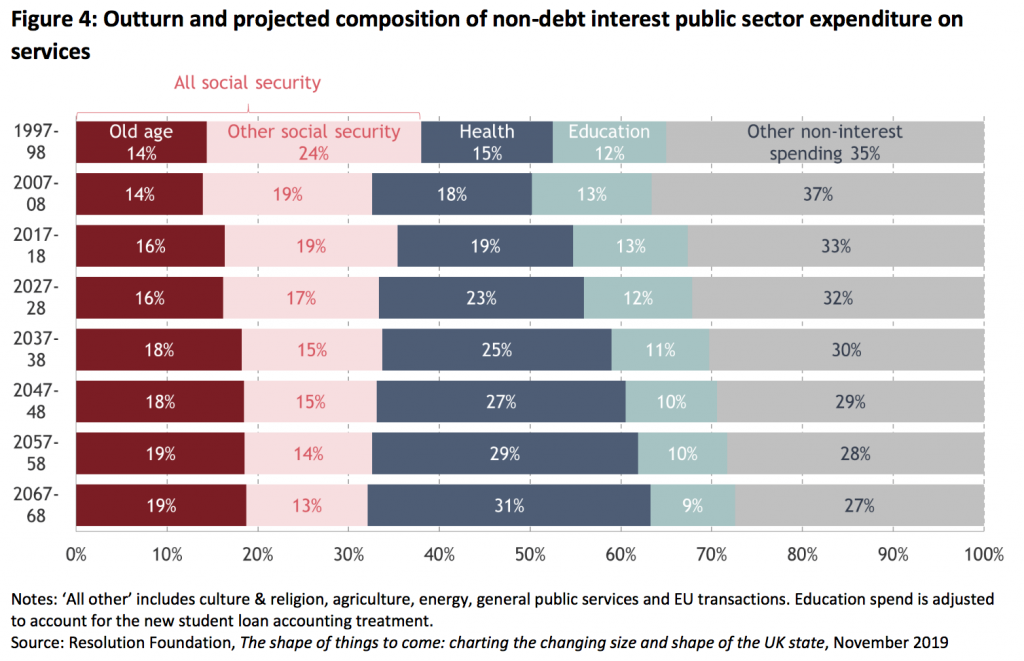 That’s the scenario set out in the final chart. It relates to non-debt interest spending only, so isn’t directly comparable with the first chart in this article. On a like-for-like basis, however, it translates into spending that falls just short of 49% of GDP – a figure well above the post-war peak of 46.6% reached in 2009-10. And of course, if the next government chooses to increase spending on some functions above that demanded by the demographic headwind – as the various manifesto promises suggest it might – then the country could end on an even higher spending trajectory. 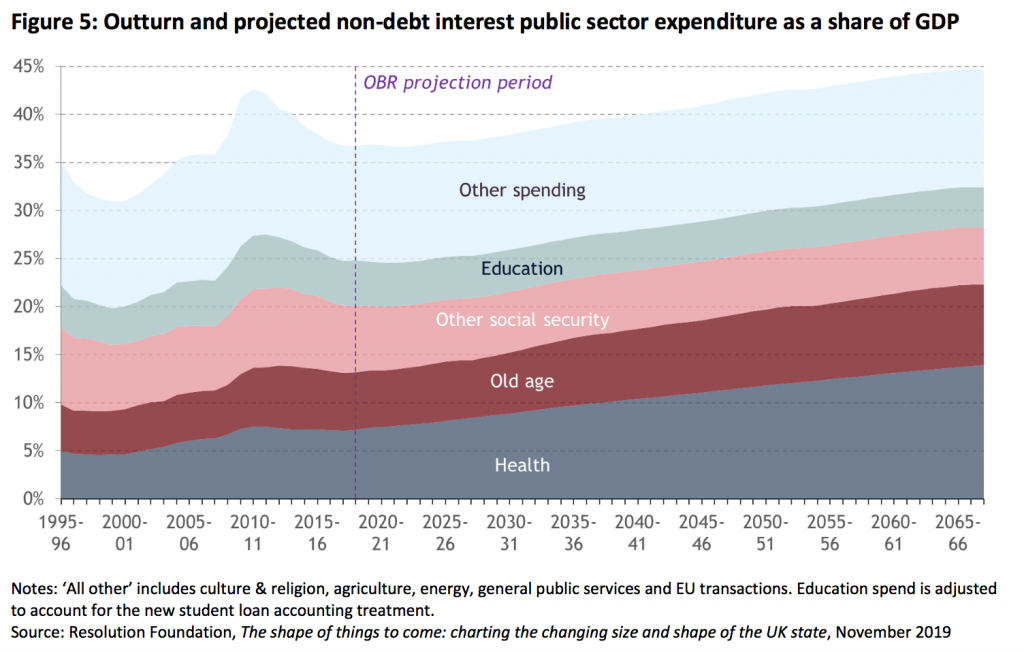 This means there are tough choices ahead: from meeting the increased healthcare and pensions bill by squeezing spending on other services, to altering the healthcare or pension offer available to citizens, or very significantly increasing the tax take. None of the options is particularly voter friendly, so we might forgive the parties for saying little on this front for the moment. But we can’t duck the difficult questions indefinitely. There may be consensus about the need for a bigger state, but we urgently need to reflect on just what we want the state to be doing – and what trade-offs we’re prepared to make in the pursuit of that goal.

Note: the above draws on the author’s report for Resolution Foundation. 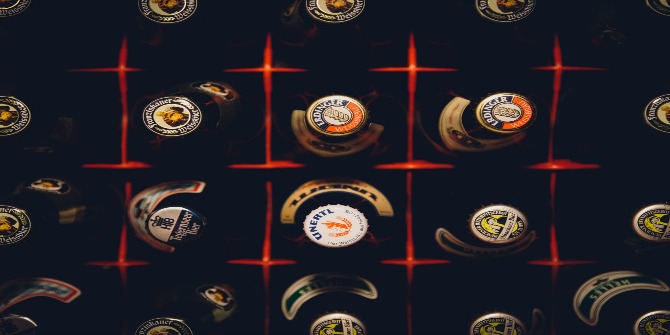