The 2010 election was fraught with accusations of electoral biases that rewarded parties unevenly. The current electoral Boundary Review aims to remove some of this bias by proposing a maximum size for constituencies and depoliticizing the issue. Dr Robert McIlveen argues that the coalition government’s changes ot established procedures do not go far enough in altering some major underlying problems of the boundary-setting rpocess.

The government is pressing ahead with a rapid Boundary Review which aims to equalise the size of MPs’ electorates across the country. This aim of equal-sized seats is commendable, and indeed overdue. Other blogs have criticized the government for the extent of the changes being made. My argument here is that the Bill before Parliament does not go far enough.

The current electoral system rewards parties unevenly, though not necessarily unfairly. There are several different components of the electoral system’s uneven rewards, including constituency size, turnout and the effects of minor parties. While constituency size is not the largest source of bias (differing levels of turnout in seats won by the various parties is consistently worth more to Labour) it is substantial and, more importantly, the only major source of unfair bias. In 2010, 18 seats out of a net total bias to Labour of 54 seats were due to different constituency sizes.

There are significant regional and national differences in constituency size, with Wales being significantly overrepresented. 38 out of 40 Welsh constituencies have a smaller electorate than the smallest constituency in the South East of England, one of the most under-represented regions. Also, 36 of 40 Welsh seats are among the 100 smallest seats in the UK. The smallest mainland seat, Arfon, is less than half the size of 21 other

constituencies. Locally there are absurd examples of different seat sizes. Two neighbouring seats in London have electorates of 90,670 (East Ham and Leyton) and 63,540 (Wanstead)  – so the first is half as big again as the second. This is democratically indefensible.

The cause of the wildly varying size of electorates is the outdated way that boundaries are redrawn. The Boundary Commission process has become politicised, with professional party operatives touring the country lobbying for the most generous boundaries they can achieve for their party. This drags the process out – the last review took seven years. Australia and New Zealand manage the same process in 6 months. Even more  impressively, New Zealand managed to deal with all complaints in just six days in 2002.

The Bill proposes a maximum geographic size for constituencies, which is unjustifiable – around one fifth of constituencies in Australia and Canada are larger than this limit, and each of those countries have two constituencies more than 100 times the size. Sparsely populated seats may require more travel or staffing allowances but in the modern world they do not justify undemocratic over-representation.

Distribution of electorate sizes in the 2010 election 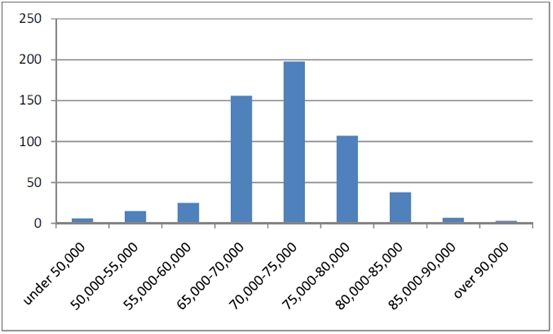 Analysing the last review demonstrates three important problems, all of which can be fixed quite simply. The Bill before Parliament addresses two of these, but could do so better; it ignores the third.

The Bill currently before Parliament is a step in the right direction, but will not go far enough to ensure fair seat sizes. The government should go further, faster.

Improving recommendations already in the Bill

Three key changes already in the Bill could be strengthened:

1. The Boundary Review process should be reformed to depoliticise it and make it much more efficient.  The political parties have learnt to manipulate the public inquiry which has made it more vulnerable to gerrymandering, albeit competitive and transparent gerrymandering. This should be changed to allow effective local representation but to restrain the professional party operatives from turning the review into drawn-out theatre.

2. Representations to the Commission should be in writing and time-limited.  The proposed 12-week limit may be too generous to the political parties’ national organisations, and should be reconsidered. 30 days is adequate for genuine local objections and too tight for national party organisations to try to gain benefit everywhere.

3. There should be a single, UK-wide electoral quota. After devolution there is no democratic justification for over-representation of Wales, Scotland or Northern Ireland which previously had more seats per population than England. Scotland has already been brought into line with England; there is no reason Wales should

continue to be 25 per cent over-represented. This is part of the government’s proposals and must be implemented.

In addition, five things not in Bill could easily be added:

4. Time limits should be enacted to prevent the review taking excessively long. Australia and New Zealand can draw up their seats in 6 months; it should not take longer than a year to re-draw the UK’s.

5. The review should use projected electorate figures. Constituencies should be approximately equal at the time of their use, not ten years after as was the case for the ‘new’ constituencies used in 2010. By shortening the timescale of the review and using ONS projections the constituencies can be fair at the election they are used in. At the very least, expected population change should be included in the list of factors the Commission may take into account.

6. The Boundary Commission should group constituencies into larger review areas. Review areas of more than 10 seats were much closer to the quota than smaller ones, due to simple mathematics. Equality of representation is more important than local council boundaries, and this should be reflected in grouping seats to ensure closer adherence to the mean which implies more frequent cross-district seats. This would result in more even sized seats in urban areas which tend to have far too small review areas, rather than  having very large and very small seats next to each other.

7. There should be a review immediately after each election. This would make each review less radical and allow more time than the current proposals for the parties and local authorities to adjust to new boundaries. Rather than have absolutely regular reviews, this maximises the gap between new constituencies being  drawn and their use, even though they have been drawn to have equal electorates at the time of use.

8. The maximum geographic size limit for constituencies should be removed. There is no democratic justification for undersized constituencies in an age of very advanced communications. Extra transport or staffing allowances might be justified; over-representation is not.

In May the UK’s biggest cities will vote on whether to directly elect mayors. The Warwick Commission investigates existing experience, both in Britain and overseas