In the wake of the attack in Paris on the satirical magazine, Charlie Hebdo, discussion has centred around freedo of speech and whether Charlie Hebdo had gone too far in offending others. Paula Zoido-Oses writes that being offended is the small and unavoidable fee we all have to pay in order to enjoy liberal freedoms. Far from being oppressive or xenophobic, Charlie Hebdo and the ‘Je suis Charlie’ movement is fighting to defend the sort of rights and liberties that guarantee the smooth functioning of plural societies.

In the aftermath of the murder of several Charlie Hebdo cartoonists, the reproduction of their depictions of Muhammed and other Muslim figures has become a symbol of solidarity with the murdered. The moral acceptability and political adequacy of this stance is being questioned by an increasing number of commentators, inspiring a larger debate on the limits of free speech. The reasons given for this are many, but they boil down to a single argument: that by mocking Islam, Charlie Hebdo was contributing towards the exclusion of an already oppressed community in France, and therefore their cartoons were morally reprehensible in the first instance. Satire should be aimed at the big and powerful, we are told, and not against the weak: because then it is not satire, but bullying. And like with any other liberal freedom, the validity of freedom of speech stops where it is used to curtail the freedoms of others.

To this extent, some think that while the Charlie Hebdo attacks cannot be justified, we should at least try to understand and explain their causes. Attention is immediately brought towards the alienation and social exclusion endured by Muslims in France. Context matters, we are told, and in the French scenario Charlie Hebdo’s only served to increase an already pronounced Islamophobia. In the same way, The ‘Je suis Charlie’ movement is seen as reinforcing the narrative of the ‘us’ versus ‘them’ that nurtures hatred and terrorism, particularly in relationship to Islamic communities in the West. The logical conclusion is, then, that Charlie Hebdo should have avoided the publication of Islamophobic cartoons, rather than insisting on it. And of course, that as much as we should condemn the terrorist attacks, it is not out of order to refrain from reproducing the cartoons, for they only offend and harm the weakest. But was this not, in fact, what the terrorists wanted?

It is true that context matters: Charlie Hebdo had been fire-bombed in 2011 and its staff had been threatened in multiple occasions for its depictions of Muhammed and other Muslim characters. By choosing not to halt its provocation, Charlie Hebdo stood against those who wanted to supplant freedom with fear. Cartoons can be divisive and damaging, but far from intending to oppress any minority the cartoonist’s intentions were actually to defend freedom of speech for all – even for those that threatened them. Their pencils were met with threats, fire-bombs, and ultimately with Kalashnikovs. Even if a pen is mightier than a sword, the threat of a gun cannot be paralleled with that of a pencil. The cartoonists were in fact satirising the powerful, not bullying the weak.

The Charlie Hebdo cartoons did not intend to oppress or segregate any minority, but instead to defend freedom of speech for all. Theirs was an insistence on the fact that liberal societies should be run by means of dialogue and reason-giving processes, and never by the imposition of unquestionable principles – and least so by violent means. Within a liberal state, individuals can make use of a multiplicity of mechanisms to be heard and taken into consideration when they consider that a certain statement is harmful for their own freedom or that of others. When this is the case, we are all free to condemn and protest whilst ensuring that the rights and liberties of all remain in place. The terrorists were not willing to enter this game, and that is why the cartoonists at Charlie Hebdo stubbornly kept publishing the offensive cartoons.

Moreover, just as it is an error to regard the terrorists as representatives of all Muslims, it is also inaccurate to understand that the current reproduction of Charlie Hebdo cartoons is directed against the entire Muslim community. The ‘Je suis Charlie’ movement does not grant anyone carte blanche to ridicule minorities or inflame feelings of xenophobia – the limits to freedom of speech are not suspended. The ‘Je suis Charlie’ movement has simply picked up the pencil where the cartoonists were forced to drop it.

Its message is still the same: first, that violence is never an acceptable means of making oneself heard – to this extent, the cartoons remain as an act of defiance against the violent, whose protests shall not be considered until they are stated by the right means; and second, that being offended is the small and unavoidable fee we all have to pay in order to enjoy liberal freedoms. Far from being oppressive or xenophobic, Charlie Hebdo and the ‘Je suis Charlie’ movement is fighting to defend the sort of rights and liberties that guarantee the smooth functioning of plural societies. To this extent, it is undeniable that the ‘Je suis Charlie’ movement is polarising and divisive, but unless we are confused or ill-intentioned, we should see clearly how the division it creates is, in fact, a very necessary one.

Note: This article gives the views of the author, and not the position of the British Politics and Policy blog, nor of the London School of Economics. Please read our comments policy before posting. Featured image credit: Ben Ledbetter CC BY 2.0 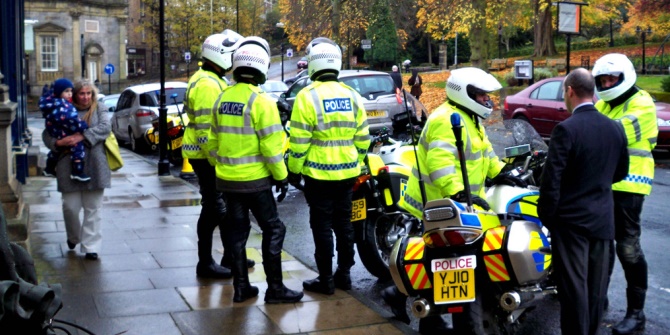