On Monday 2 February, Shadow Foreign Secretary Douglas Alexander MP set out Labour’s foreign policy stall in an on-the-record speech at Chatham House. In this post, the LSE’s Chris Brown discusses the speech, and considers the role that disagreements over foreign policy might play in the event of a hung parliament.

The stated theme of Douglas Alexander’s recent speech was ‘Progressive Internationalism’ as a counter to the ‘introversion of global publics’ – not a particularly catchy sound-bite, but interesting nonetheless. Alexander’s thesis is that one of the most disturbing features of the current international order is the way in which publics throughout the world are turning inward, putting pressure on governing elites to minimise international links; this introversion is, plausibly enough, seen to be a problem because, to put it bluntly, the rest of the world isn’t going to go away because British (or American or German) public opinion wants it to. Rather less plausibly perhaps, progressive internationalism is the way in which a future Labour Government will combat this problem.

What does progressive internationalism involve? The three elements highlighted in this speech were (1) strength at home as the necessary basis for an active foreign policy, which means essentially a sound economy (2) organised solidarity based on active engagement with our friends and allies in international organisations and (3) support for global norms governing human rights, arms control and the like. Alexander’s argument is that the Coalition, and in particular the Conservatives, have put all three elements at risk, especially the second element; the Conservative threat to leave the EU has damaged Britain’s influence within that body, and the lack of any coherent thinking on the reform of the UN system or NATO has been almost as damaging. The central policy of an incoming Labour government will be to re-engage with our friends and partners abroad who, allegedly, have been alienated from or at least neglected by the present government. A review of foreign and defence policy will be initiated immediately along with a simultaneous review of the operation of the Foreign and Commonwealth Office.

There were comparatively few specifics in this speech, although some almost emerged in the Q and A. A credible nuclear deterrent would be retained. A future Labour Government would recognise Palestine, but only when such a move would enhance the peace process. A proposal from the audience that Labour should join the insurgency represented by Syriza and Podemos was firmly rejected – these are ‘parties of anger’ whereas Labour represents a constructive alternative. Likewise a facile anti-Americanism was rejected. On the wider Middle East crisis the ruling principle should be ‘do no harm’, which seems sensible, although, since very few people actively set out to do harm, a little vacuous. Alexander held that the Invasion of Iraq in 2003 has done harm in the region, though since he voted for it he presumably didn’t think that was the intention; he argued that the Chilcot Report should be published as soon as possible on the principle that this would put the Iraq War behind us, allowing the country to move on. Fat chance.

One interesting issue that did not come up on the day concerns the impact of foreign policy on coalition-building in the quite-likely event of a hung parliament. It is striking that Labour’s foreign policy is very different from that of its potential coalition partners of the left – the Scottish Nationalists and the Greens; the SNP is no longer committed to leaving NATO (the Greens are) but it is certainly suspicious of the kind of engagement that Alexander favours and both the SNP and the Greens oppose the continuation of the British Nuclear Deterrent. On the latter point Labour is actually closest to the Conservatives since the Liberal Democrats oppose Trident while nominally supporting an unspecified cheaper alternative. Indeed, in terms of specifics, as opposed to the mood music, Douglas Alexander’s account of the foreign policy objectives of the next government could easily be endorsed by at least the Cameroon wing of the Conservative Party. On Europe, many Conservatives are actively hostile to Britain’s EU membership and would reject Labour’s position, but David Cameron has made it clear that he hopes to be able to find a way to keep the UK in the EU.

As far as the mood music is concerned – the introversion of global publics – a key questions is whether this public mood is actually something that can be countered by progressive internationalism and a wider engagement of the world. As a rather parochial example of the problem, Alexander appeared to feel that the quite widespread British Euro-scepticism has actually been generated by the present government’s sceptical approach to European institutions – but, of course, the causation could be in the other direction. It will be interesting to see if the election of a Labour government or a Labour-led coalition leads to a decline in Euroscepticism. I suspect not. Still, the general thrust of ‘progressive internationalism’ that active engagement with friends and allies abroad is a better bet than a retreat into semi-isolation is sensible and right. We’ll have to see how this plays out in the weeks ahead.

Chris Brown is a Professor of International Relations at the LSE.

David Cameron has created a new vision of Conservative foreign policy, one which is far happier to intervene to stop suffering and expounds a bigger, and more liberal, view of Britain’s interests in the world 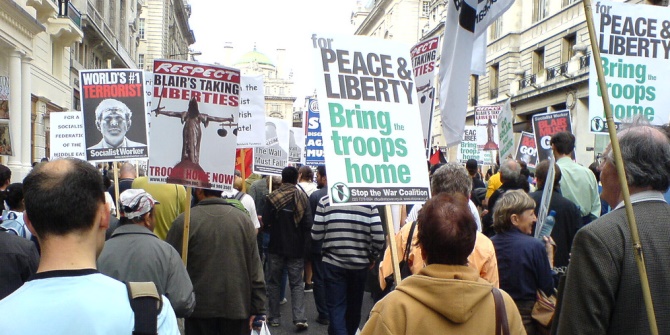