Yekaterina Chzhen discusses how the UK fares on child wellbeing when compared to other developed countries. She writes that, although progress had been made on child poverty reduction and child health during the early 2000s, austerity policies meant that the UK has made little progress on key indicators since.

The latest UNICEF report on child wellbeing in developed countries – Worlds of Influence – puts the United Kingdom in 27th place out of 38, wedged between Latvia and Slovakia. The league table includes three dimensions: mental wellbeing, physical health, and academic and social skills. Five countries rank in the top third in all three: Denmark, Finland, the Netherlands, Norway, and Switzerland. Three countries are in the bottom third for each of the child wellbeing outcomes: Chile, Malta and the United States. The UK does worst in adolescent mental health (29th) and academic and social skills (26th), but fares better on children’s physical health (19th).

Mental wellbeing. Fewer than two in three (64%) 15-year-olds in the UK report high life satisfaction, ahead of only Japan (62%) and Turkey (53%). However, the proportion of adolescents aged 15-19 committing suicide is low by international standards.

Physical health: The UK has a low mortality rate for children aged 5-14, but its percentage of 5-19-year-olds who are overweight or obese (31%) is among the highest in the rich world. It ranges from 14% in Japan to 42% in the United States. Over a quarter of 11-15-year-olds in England (27%), Wales (29%) and Scotland (32%) say they are too fat, while another 13-14% say they are too thin. Body image is a key predictor of adolescent life satisfaction. It explains 4-8% of the differences in life satisfaction for boys and 12-17% for girls, among the strongest associations in the rich world.

Skills: Fewer than two in three (63%) 15-year-olds in the UK achieve basic proficiency in reading and mathematics. This puts the UK in the middle of the international ranking that ranges from 32% in Bulgaria to 79% in Estonia. Meanwhile, fewer than four in five 15-year-olds (73%) say that they make friends easily, an important social skill. This varies from 68% in Chile to 83% in Romania, with the UK in the bottom half of the ranking. These figures take into account the percentage of children still at school at 15 in each country. 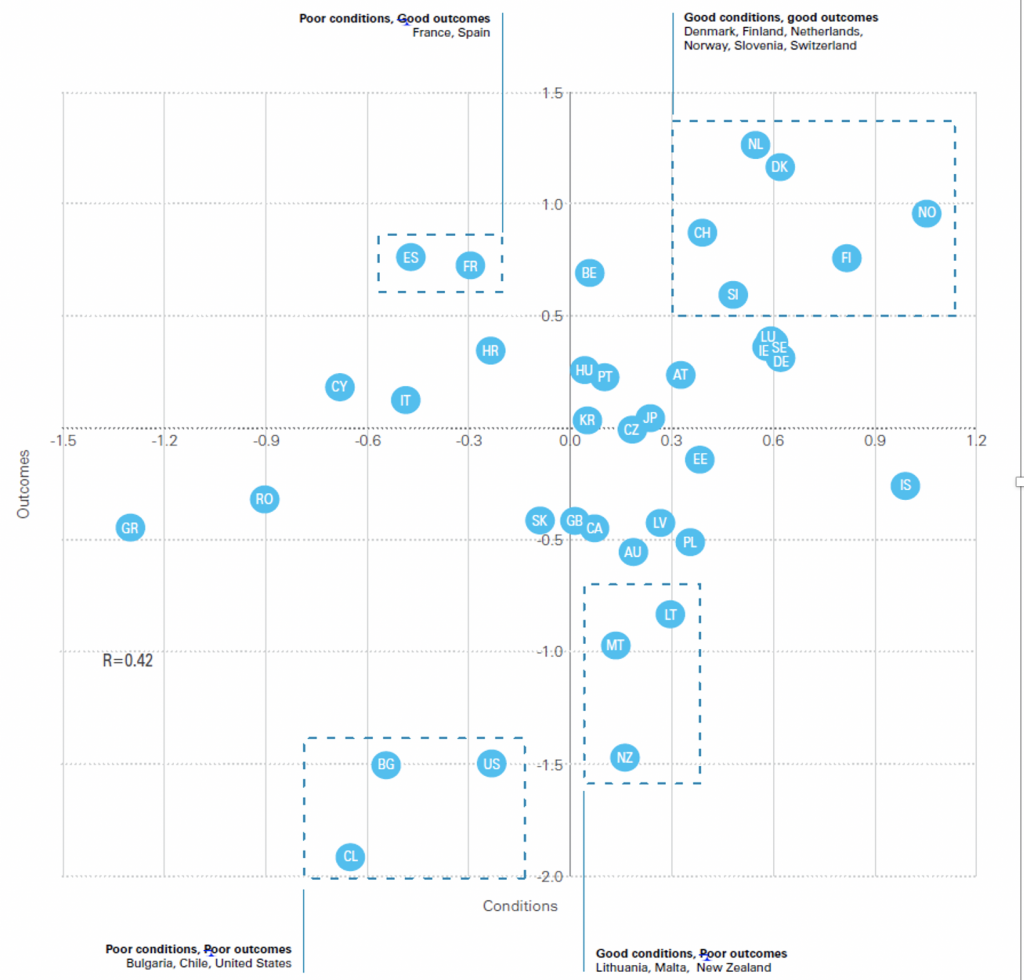 The study analysed the most recent internationally comparable data for 2018, producing a pre-pandemic ‘baseline’ of child wellbeing in rich countries. The COVID-19 crisis poses a substantial threat to children’s mental health, physical health, and skills development, particularly if they are already disadvantaged. A new report by the Child Poverty Action Group documents the severe toll that the crisis inflicted on low-income families’ living standards, relationships, and mental health.

Worlds of Influence is the third in the Innocenti Report Card series to produce a child wellbeing league table of rich countries. The UK ranked at the bottom in the first overview of children’s lives, which included 21 OECD countries and used data for the early 2000s. Such a poor showing in UNICEF’s league table sparked a national debate and a renewed policy focus on children. It helped revitalise the Labour Government’s commitment to ‘eradicate’ child poverty by 2020. This culminated in the Child Poverty Act 2010, which established four binding poverty targets and a framework for monitoring progress at a national and local level. The ‘relative low income’ target stated that less than 10% of children would live in households with an income below 60% of the contemporary median in 2020/21.

The UK made substantial progress on child poverty reduction and child health during the 2000s, although teenage pregnancy rates and youth unemployment remained high. The share of children living in low-income households fell from 26% in 1998/9 to 18% in 2010/11. It is not surprising that the UK moved up to the middle of the ranking in UNICEF’s second assessment, which used data for the late 2000s. Yet the study expanded from 21 to 29 countries. Latvia and Romania – not included in the earlier report – now occupied the bottom rung of the ladder. Does it mean that the UK’s improvement was illusory? A closer look revealed that it rose four places among the 21 countries included in both studies. Only Portugal travelled further, as it moved up five places.

However, the latest UNICEF report shows that the UK made little progress on key child wellbeing indicators between 2010 and 2018. The share of young people not in education, employment or training remains at 10%, among the highest in the rich world. Although the measles immunisation rate increased by 4 percentage points to 88%, the UK is no longer ‘measles-free’. The rate of low birth weight remains at 7%, close to the OECD/EU average. Child poverty flatlined after more than 10 years of a downward trend. One in four (24%) children in the UK live in income poverty, one of the highest rates in the EU and the OECD. This varies from one in 10 children in Iceland to one in three in Turkey.

The last 10 years are the so called ‘lost decade.’ Children and families bore the brunt of austerity measures, as the child benefit was frozen, the ‘bedroom tax’ and the benefit cap were introduced, and the real value of working-age benefits and tax credits diminished, while state pensions were protected through the ‘triple lock’.  Although the Child Poverty Act has not been formally repealed, the targets have been abandoned in 2015. The UN special rapporteur on extreme poverty and human rights, Philip Alston, noted in his 2019 report that the UK government policy changes since 2010 were unravelling two decades of progress on child poverty.

After sustained cuts to social spending, the UK now ranks 27th out of 41 in a separate league table of national conditions for a good childhood – policies and the overall national context. It fares worst in the policy component, ranking 35th on social protection, 30th on health and 24th on education. Yet the context indicators paint a more hopeful picture: the UK ranks 12th on the economy (national wealth and unemployment), 9th on society (social support and homicide), and 10th on the environment (air pollution and water quality). This is before the COVID-19 crisis decimated the economy, strained services, and put pressure on social cohesion.

Worlds of Influence shows that countries that did well on the national conditions tend to do well on children’s outcomes. It is not a perfect relationship, as other factors, not covered in the study, may influence child wellbeing. It also takes time for improvements in policies to translate into better outcomes. For example, some countries did poorly on outcomes despite good national conditions (e.g. New Zealand) and others did well on outcomes despite poor conditions (e.g. Spain). But the UK did about as well on child wellbeing as one would expect given its policies and context.

Yekaterina Chzhen is an Assistant Professor of Sociology at Trinity College Dublin and a former UNICEF Social and Economic Policy Specialist. She is a co-author of Worlds Of Influence.

Photo by Ankush Minda on Unsplash.