Reforming the UK’s voting system will be one of the hottest issues in British politics over the next two years. Here Tony Travers, Patrick Dunleavy, Chris Gilson and Leandro Carrera offer the definitive simple guide to all you need to know about the top five alternative voting systems on offer.

1. First Past the Post (or ‘FPTP’ for short) – the current system in use in the UK since mediaeval times. The country is divided into local constituencies (voting districts) and an election takes place within each of these.  The candidate who gets the largest number of votes in each constituency becomes the MP – they do not need to have majority support, just more support than anyone else.  One party usually gets a clear majority of MPs and forms the government, but ‘hung Parliaments’ have occurred in 1974 and 1977-79, and now in 2010.  If there is no majority, it is necessary for two or more parties to work together, or there is a minority government.

Incidentally, the ‘first past the post’ label is completely misleading because there is no fixed winning post. What you need to win a local seat is just a ‘plurality’, namely more votes than anyone else. So the more parties compete in each seat, the lower the winning ‘post’ gets. Consequently political scientists call this system ‘plurality rule’, a much more accurate label.

2. Alternative Vote (AV) – this system keeps the local, single MP constituencies but people vote 1, 2, 3 etc (instead of just using a X). Votes are counted in a more sophisticated ways and each MP must get a majority (50%+1) of the votes to be elected.

The key difference in the AV system from FPTP is that in each local contest voters fill in a ballot paper where they number the candidates in order of preference – that is, they put 1 for their first preference; 2 for their second choice; 3 for the party they like 3rd, and so on.

We count all the first (top) preferences that voters have given, as now. If any candidate gets majority support (i.e. 50% +1), they immediately win the seat.  If not, the candidate who has the fewest 1st preference votes is knocked out of the contest, and we look at the second preferences of their voters, redistributing these votes to the remaining candidates in line with these voters’ number 2 choice. This process of knocking out the least popular candidate and redistributing their voters’ choices as voters intended continues until one candidate gets 50 per cent.

In the USA this system is called ‘instant run-off’ and this is a good summary of what AV does – it delivers a run-off election when no one gets an outright majority on first preference votes.

3. Alternative Vote Plus (AV+) – this is a variant of the Alternative Vote (AV) method, with most MPs elected locally using AV in single MP constituencies. But now extra MPs are also elected in multi-member seats at regional level. They go to parties that are under-represented in the local contests.

A large proportion of MPs (75% to 85%) are elected according to AV in local constituencies (see above). But now the remaining MPs are separately elected on a ‘top up’ basis for each region or county using proportional representation. Voters have two votes, for their local MP, and for a party list of candidates at the regional top-up level.  We count the share of votes for each party in this top-up election, and elect MPs from the list of candidates for any party that has not already got enough MPs from the local contests, given their regional share of the votes. Candidates are elected in the order that each party has listed them – so the first seat goes to a party’s top candidate, its next seat to its second candidate, etc.

This system tries to match parties’ shares of all local and top-up MPs in each region to the (regional) votes for that party. But because there are far fewer regional top-up MPs than locally elected MPs, the system is at best ‘broadly proportional’ – it is very unlikely to produce results that closely match parties’ MPs to their vote shares.

4. ‘Additional Member’ System (AMS) – this is a more balanced and fully proportional system. Around half of MPs are locally elected, using FPTP as above. The remaining half or so (the ‘additional members’) are regionally elected using PR, so as to match every party’s share of MPs to their votes share.

The basic idea of electing two types of MPs is the same as the AV+ method above. Around half of MPs are locally elected in constituencies: here whoever gets the largest vote becomes the MP. But in AMS voters also have a second vote for regional top-up MPs. Candidates are put forward on regional lists by each party. We look at how many local seats a party has in a region, and at what share of the votes it has in this region: if it does not have enough MPs we elect more people from its regional list to bring it up to parity of MPs and vote shares. There’s a formula for doing this that works perfectly.

The one detailed point to notice here is that in some AMS elections (like the Greater London Assembly and Germany) parties have to get a minimum share of the vote to qualify for getting any MPs at all: usually the requirement is 5 per cent of votes. In other AMS elections (such as Scotland and Wales) the regions used for top-MPs are small enough already, so that this extra rule is not needed.

One for the nerds – AMS is often called ‘Mixed Member Proportional’ (MMP) in academic discussions and in New Zealand.

5. Single Transferable Vote (STV) – uses much bigger, multi-member  constituencies (electing 3 to 5 MPS each) to give local seats to different parties. This is a fully proportional system that matches MPs to votes.

The number of constituencies is reduced (to a third or a fifth of the current number) and their size is increased, so that we can elect 3 to 5 MPs at a time in each local contest. As in AV above, voters mark their choices 1 (top choice), 2 (second choice), 3 and so on. If they like, voters can choose candidates across different parties, so as to exactly match their personal preferences. A complex counting process operates that allocates seats in an order to the candidates that have most votes, so as to get the best fit possible between party vote shares and their number of local MPs. Over the country as a whole the results should be proportional.

Want to know more about how this magic counting system works? These next two paragraphs are for you. We look at the votes and divide them by the number of MPs +1  This gives a ‘quota’, a vote share that guarantees a party one MP. (E.g if we count 100,000 votes and have 4 MPs to elect in a constituency, then the quota would be 100,000 divided by (4+1) = 20,000 votes). Any party with more than a quota gets an MP straightaway; a party that has two quotas, gets two MPs, etc. Every time we give the party an MP, we deduct that share of votes from its total.

When we’ve done this, there will normally be about half of the seats still unfilled. Here we shift into the AV method of knocking out the bottom candidate, and redistributing their votes (see above) – and we keep doing this until one of the parties still in the race has a quota and wins the next seat. We then deduct this quota from that party’s votes (as above) and carry on with the AV ‘knocking out the bottom candidate’ process until all the seats are allocated.

What difference will the systems make? Who benefits?

Our chart below shows the current ‘best guess’ of how the 2010 election would have turned out under the different systems. 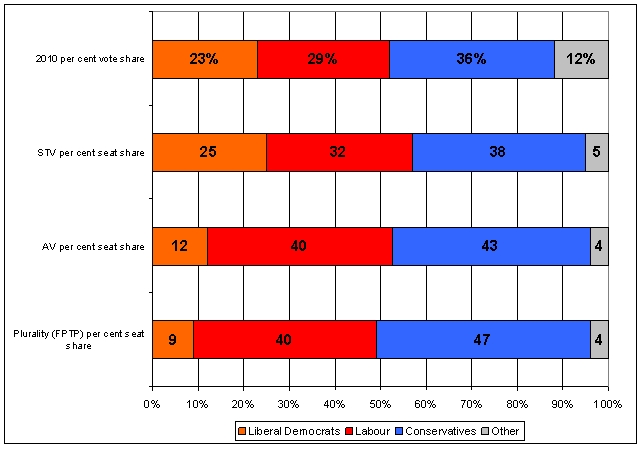 An accessible and British-focused account that dates back to the first wave of electoral reform in the UK is provided by Patrick Dunleavy, Helen Margetts and Stuart Weir, The Politico’s Guide to Electoral Reform in Britain

A more recent but also more complex account is provided by Simon Hix, Ian McLean and Ron Johnston in a report from the British Academy:

Nuclear power is not the solution to the UK’s energy security problems, particularly not in the form of the Hinkley C plans

Margaret Thatcher has a fair claim to be called the most influential politician since the Second World War, but her legacy is still hotly disputed today because of her mistakes and weak points