With the Scottish government focused on securing an independence referendum in 2020, the next UK Parliament is set to face difficult dilemmas on how to deal with the matter. Jack Sheldon explains why the current positions of the parties involved, and the trajectory of party support in different parts of the UK, mean that there is a real risk of stumbling towards another major crisis in the UK’s territorial constitution.

The next parliament will be faced with major constitutional dilemmas, not just over Brexit but also over a second referendum on Scottish independence. While the European question has been discussed extensively in the London media and by the political parties, the Scottish question has so far come up in the ‘British’ campaign only as one part of the Conservative soundbite that a Labour-led government would lead to ‘two referendums’. This lack of serious attention is extraordinary, given that the Scottish government is proposing a referendum be held next year and the potential for that commitment to lead to a major crisis in territorial politics, whichever of the main UK parties is in office.

There is naturally far greater focus on the domestic constitutional question in Scotland itself, where there are many marginal constituencies that will be hard fought between the SNP and the three main pro-Union parties. While the precise breakdown of Scottish seats is far from certain, current polling suggests that the SNP will secure a clear majority of them for a third consecutive general election. That would pose acutely difficult strategic dilemmas for whichever pro-Union party forms the UK government about whether, and potentially when, to allow an independence referendum, and for the Scottish government about how to proceed in the event that a referendum is refused by Westminster.

Will the next UK government allow an independence referendum to take place?

The precedent from the previous independence referendum is that the power to legislate to hold a referendum is temporarily transferred from Westminster to Holyrood through a ‘section 30 order’ under the Scotland Act. This happened in 2012, following the ‘Edinburgh Agreement’ between the UK and Scottish governments, with the referendum itself held two years later. The SNP’s leadership have been consistent in stating that this is the route by which they would seek to hold a second referendum. Pointing to Brexit and their May 2016 manifesto commitment to a referendum in the event of a ‘material change in the circumstances that prevailed in 2014’, they intend to formally make a request to open negotiations shortly after the election so that the referendum might be held in 2020.

If the Conservatives are still in government, the likelihood of a section 30 order being granted on this timetable currently appears remote. Opposing a second independence referendum is the dominant theme of the party’s campaigning in Scotland, and reflecting this Boris Johnson has made a ‘cast-iron’ pledge not to grant one while he is Prime Minister. He has indicated that this commitment would apply even if the SNP wins a majority at the 2021 Scottish Parliament election. That would be a major departure from the approach taken by David Cameron, who reiterated in his recent memoir that he thought it was right that a referendum should be held in light of the majority the SNP won in 2011. Of course, the context is quite different now – while Cameron expected the pro-Union side to win comfortably when the 2014 referendum was agreed, the fact that support for independence has remained consistent at around (and at times above) the level of the 45% ‘Yes’ vote in 2014 means that granting a referendum would now be a far riskier proposition for an avowedly unionist Prime Minister.

Nevertheless, the considerable risks involved in not granting a referendum in these circumstances must not be under-estimated. If a Scottish government is elected on a clear pledge to hold a referendum in 2021 but this is refused by Westminster, a major crisis in the UK’s territorial politics would be a certainty. Comparisons would inevitably be drawn with the situation in Spain, where successive Spanish governments have refused to grant a Catalan independence referendum despite pro-independence majorities in the Catalan legislature. A Johnson government would need to think very carefully about whether it really wanted to go down that particular road.

The Labour Party’s Westminster leadership have advanced a more nuanced line than the Conservatives on granting a section 30 order. While Labour’s manifesto indicates that there would not be a referendum in the ‘early years’ of a Labour government, they have also indicated that the party would ‘not stand in the way’ if the SNP won a Holyrood majority in 2021.

It is unclear whether such a commitment – which clearly would not allow a referendum to be held on the schedule proposed by Nicola Sturgeon – would be sufficient to satisfy the SNP. In a hung parliament, a Labour government could yet come under pressure to grant an earlier section 30 order in order to secure SNP votes for aspects of its domestic policy agenda. It may, then, prove impossible in practice for a Labour government to delay having to face up to this dilemma until after 2021.

How will the Scottish government respond if an independence referendum is refused?

How far the Scottish government is willing to go in pursuing its commitment to hold an early independence referendum will be as pivotal in determining the sequence of events as the UK government’s approach. While the SNP’s leaders have so far remained committed to the section 30 route, if an order is – as expected – not forthcoming soon after the election, they may well come under considerable pressure from increasingly restive supporters of independence to pursue alternatives.

There is disagreement on whether a section 30 order is an absolute requirement to hold an independence referendum. Some constitutional lawyers have previously argued that, although ‘the Union’ is reserved to Westminster, the Scotland Act does not prohibit the Scottish Parliament from legislating for an independence referendum without a section 30 order. This has never been tested in the courts, but if the prospects of securing a section 30 order seem slim the Scottish government might at some point decide to go ahead with legislation that would inevitably result in a case before the Supreme Court. There was evidence of emerging grassroots pressure for this at the SNP’s most recent conference, where some activists tabled a motion calling for a ‘Plan B’ on independence to be debated, although this was ultimately voted down.

This will be a tricky judgement call for the SNP’s leaders to make. Their more cautious supporters may prefer to hold off from any escalation until after the 2021 Scottish Parliament election, when they would hope to have secured an explicit mandate for a referendum that the Westminster government would find it more difficult to refuse. Some in the party may also be uneasy about holding a referendum outside of the section 30 process, on the grounds that in the long-term it would be important than any referendum is seen as legitimate by the UK government and the international community. On the other hand, others in the party will worry that if they stall now the most propitious moment for securing a ‘Yes’ vote might be missed. Once the immediate Brexit question has been settled, the case for independence could be more difficult to make, and the SNP could by then also be feeling the repercussions of former First Minister Alex Salmond’s trial.

Whatever the result on 12 December, the next parliament looks set to be confronted with acutely difficult dilemmas on how to deal with the Scottish government’s pursuit of an imminent second independence referendum. The current positions of the parties, and the trajectory of party support in different parts of the UK, mean that there is a real risk of stumbling towards a major crisis in the UK’s territorial constitution within the next few years. Given the existential nature of these questions  for the UK, they merit much closer attention from the UK-wide parties and the media than they have received so far in this campaign, rather than just being reduced to soundbites.

Jack Sheldon is a Research Assistant and PhD candidate at the University of Cambridge. He works on the ESRC-funded research project, ‘Between Two Unions: The Constitutional Future of the UK and Ireland after Brexit’, and is a Fellow at the Centre on Constitutional Change. 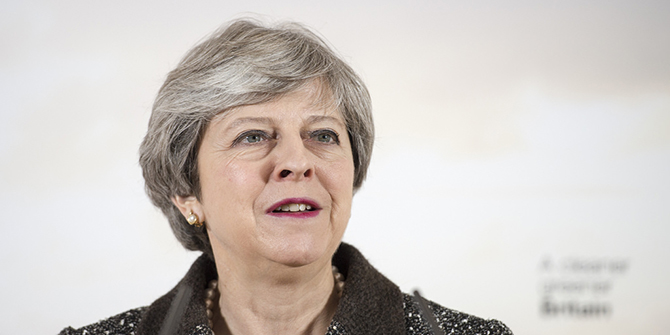