John Tomaney focuses on the proposed deal between government and the North of Tyne area. He explains why it fails to meet the government’s own definition of appropriate devolution arrangements, and why local government leaders have nonetheless accepted it.

…and Esau came from the field, and he was faint: And Esau said to Jacob, Feed me, I pray thee, with that same red pottage; for I am faint: therefore was his name called Edom. And Jacob said, Sell me this day thy birthright. And Esau said, Behold, I am at the point to die: and what profit shall this birthright do to me? And Jacob said, Swear to me this day; and he sware unto him: and he sold his birthright unto Jacob. Then Jacob gave Esau bread and pottage of lentiles; and he did eat and drink, and rose up, and went his way: thus Esau despised his birthright (Genesis 25:29–34).

The announcement in the 2017 Budget that the government was “minded to” support a Devolution Deal for “North of Tyne” (NoT) covering the local authorities of Newcastle, North Tyneside and Northumberland, represents the latest phase in English devolution. The deal offers £20 million per year in revenue funding, but requires an elected metro-mayor to chair a Combined Authority of the three councils, raising the prospect of elections for a metro-mayor in 2019. The NoT deal replaces a deal offered in 2015, covering the wider North East region – Tyne and Wear, Durham and Northumberland – and signals the dissolution of the existing North East Combined Authority (NECA). The original devolution deal failed because NECA could not agree among themselves a funding deal with central government and to the stipulation that it should include a directly-elected metro-mayor.

The government has heralded the NoT deal as another victory for its plan to roll out metro-mayors across England. But the NoT story is more likely to reveal the limits of the government’s attempt to impose a top-down, one-size-fits-all model of devolution. In several ways, the proposed deal does not meet the government’s own definition of appropriate devolution arrangements.

First, the government’s case to date has been that mayors at the city-region scale are necessary to overcome “fragmented decision making and blurred accountability” characteristic of metropolitan governance where, “even within the same city region, urban and suburban leaders do not always work together on shared objectives.” The NoT deal fails to tackle this fundamental problem because most of the urban region is excluded from the deal. (Indeed, in areal terms, most of the NoT is rural, including the remotest parts of England.)

The Centre for Cities, which generally supports such deals, acknowledges that “the geography of the new deal is far from ideal” because it is ill-fitted to promoting a densely developed functional urban region which it claims is the driver of economic growth. For instance, some 35% of Gateshead residents cross the Tyne to get to work daily, but are excluded from the devolution deal. Far from providing clearer city-region governance, the deal adds further complexity, for instance, in the management of Tyne and Wear Metro rapid transit system, which extends south of the Tyne and as far as Sunderland. (The NoT deal does not include the transport powers devolved to Greater Manchester.) Far from raising the prospect of a “powerful metro-mayor”, what is offered is a kind of “Mini Metro-Mayor”. With a population of only 800,000 compared to 2.8 million in Greater Manchester or the West Midlands, a NoT will command less legitimacy and political-economic weight in their own area as well as with the other metro-mayors and national government. 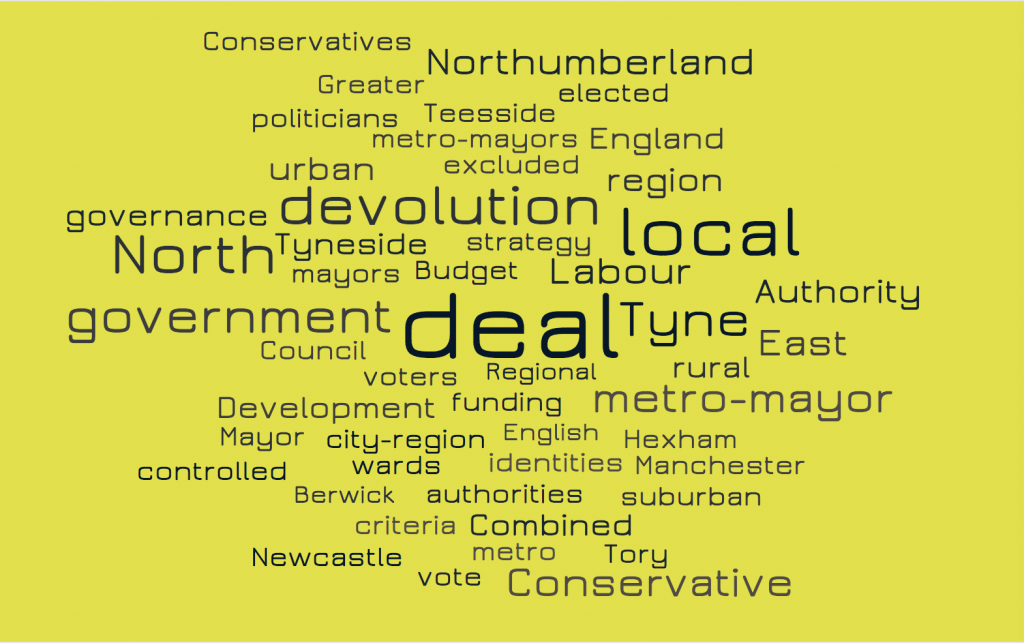 Second, the NoT deal does not appear to meet the legal criteria for establishing a Combined Authority (CA). The Local Democracy, Economic Development and Construction Act 2009 provides the statutory basis for the establishment of CAs. Specifically, S. 110 (3) requires that, in making the order to create a CA, the Secretary of State must have regard to the need “(a) to reflect the identities and interests of local communities, and (b) to secure effective and convenient local government.”

In the festive period, as I went about my Christmas shopping and socialising in Newcastle and environs, I conducted my own (unscientific) opinion gathering in shops, bars, buses and taxis. I asked two questions “Where is the North of Tyne?” and “Have you heard there’s going to be a new mayor for it?”. I hardly need to report that there were few clear or affirmative answers. In fact, “North of Tyne” is a misnomer; one of the principal settlements in Northumberland – Hexham –is located south of the Tyne. Defining sub-national identities in England is notoriously difficult, but “North of Tyne” seems uniquely contrived and opaque. It is not the product of any logic of rational local government, more effective economic development policy or underlying local identity. Rather, it is the outcome of a pressing need for another devolution deal, albeit one that does not meet the government’s own criteria of likely success.

Why have local government leaders accepted this deal? From the point of view of local Conservatives (and the government) the deal opens promising political terrain in a Labour heartland. Two Northumberland constituencies, Hexham and Berwick are Conservative controlled. Northumberland County Council is also currently Conservative controlled. Parts of North Tyneside have a strong Tory vote and the council had a directly elected Conservative Mayor until recently. The Conservatives have a much better chance of winning control of a Mini Metro-Mayoral race than they do winning one on a larger North East franchise.

A plausible Conservative electoral strategy would mimic the approach which won them the metro-mayoralty in Labour dominated Teesside: keep the election low-key, bet on crushingly low turnouts in Labour wards, and devote your energies to getting the vote out in Tory wards in the more affluent suburbs and rural areas. On Teesside, on a 21% voter out, the strategy successfully – albeit narrowly – delivered a Conservative metro-mayor. A similar result would please some business and media interests on Tyneside. But a Conservative likely owing most electoral debts to rural and suburban voters would make an unlikely metro-mayor.

But why did local Labour politicians agree to the deal? The case for devolution is strong in principle, but what is on offer is the thinnest gruel. The local apologists for the deal express the hope that agreeing to a constrained deal, once it success is acclaimed, will lead the rest of the North East local authorities to come on board. The government is actively discriminating against places without metro mayors in the disbursement of expenditure. But these cash payments are measured against the budget of the now-abolished Regional Development Agency and the harsh effects of austerity which have particularly affected the North East.

There is a good chance that the NoT deal will discredit the case for devolution, confusing the public, adding complexity to urban governance and delivering few noticeable material improvements. And, any gains which are achieved will be difficult to attribute to devolution because neighbouring local authority leaders will want to claim their share of credit. It is hard therefore to fathom what motivates local Labour politicians. Like other devolution deals, the NoT one was agreed largely behind closed doors. An official consultation is underway, in which the local officialdom will back the deal, but most local voters are in the dark.

The Book of Genesis tells how Esau sold his birthright to Jacob for a mess of pottage. Things did not end well for the House of Isaac. Here endeth the lesson.