Was there really a post-war consensus in British politics? Dean Blackburn explains the nature of this convergence. He writes that although Labour and the Conservatives had different objectives, both preferred piecemeal to radical change, meaning that their disagreements were contained within a set of ideational parameters.

The post-war period continues to cast a long shadow over contemporary politics. Not only do politicians and commentators frequently make reference to the post-war decades in their efforts to justify their current policy positions, but popular memories of the period often inform our understanding of present policy debates. But if the significance of the post-war moment can be established with relative ease, it is more difficult to determine the character of its parliamentary politics.

Indeed the period remains the subject of considerable debate among historians and political scientists. According to some accounts, the three decades that followed the Second World War were a period of consensus. The 1945 General Election, it is argued, ushered in a period of political stability that was made possible by a bi-partisan agreement on the basic objectives of public policy. Other accounts, by contrast, suggest that this ‘post-war consensus’ is a mythical construct. Their authors draw attention to the distinctive nature of the main parties’ ideologies, and they place emphasis on the policy changes that successive post-war governments introduced. Ostensibly, these narratives may appear irreconcilable. But in a recent article in British Politics, I have argued that it might be possible to settle their competing claims by drawing attention to the way Britain’s main parties thought about rationality. 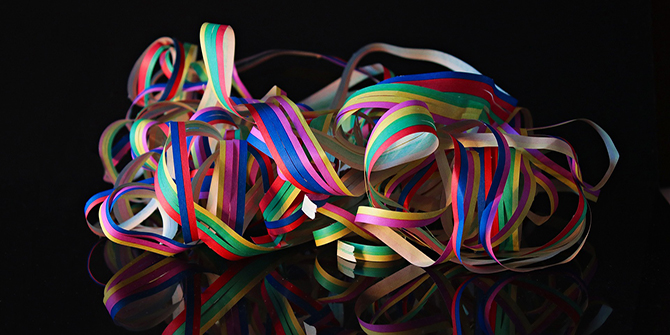 When they engage in political thinking, actors are compelled to consider the nature of human reason. For they must determine what role reason can play in identifying and legitimating certain social and political arrangements. Some political ideologies, such as conservatism, suggest that human reason is a limited faculty. In turn, they are suspicious of abstract theorising and prefer to regard the observable past as the best guide to future practice. Progressive ideologies, by contrast, tend to adopt a more positive conception of reason. Indeed they suggest that reason can be employed to identify arrangements that are superior to others, and they are more likely to describe a particular future that they want to realise.

When we consider the ideologies that informed the thought of Britain’s main parties for much of the post-war period, we expose some degree of convergence on these questions. I call these ideologies ‘middle way Conservatism’ and ‘revisionist social democracy’. And while their architects disagreed on a range of policy questions, they tended to share some similar views about the appropriate function of human reason.

Three commonalities can be outlined. First, they shared a common enthusiasm for empiricist reasoning. Under the influence of Karl Popper and other post-war philosophers, leading figures in both parties argued that no beliefs could be held with certitude, and that empirical observation was the best guide to action. As one of Labour’s revisionists put it in 1962, ‘we should not hold our beliefs and assumptions with unalterable certitude. The best reason we can have for holding them – the only good reason for holding them – is that they have stood up to critical examination so far, and stood up better than any known alternative.’ Ian Gilmour, who was the Defence Secretary in Edward Heath’s government, offered a similar view. The appropriate function of politics, he argued, was to ‘make trial of the age. It should be a benevolent inquisition, checking and questioning what is in appearance the dominant orthodoxy of the day … This is all the more necessary since, as Karl Popper has pointed out, “nothing ever comes off exactly as intended”’.

Second, middle way conservatives and Labour’s social democrats arrived at similar understandings of the social order. Rather than regarding society as a malleable entity that could be re-shaped through rational activity, they tended to conceive of it as the product of forces that were not amenable to political intervention. In part, this was because they believed that it was irrational forces that shaped the basic features of society. Evan Durbin, who exerted a considerable influence on post-war Labour thinking, thus wrote that ‘[f]rom the secret places of the heart there floods up into political and social affairs the torrents of irrational feeling, both positive and negative, which make the relations of social groups unstable and uncontrollable’.

Conservatives might have raised suspicions about the psychological ideas that informed statements of this kind. But they endorsed the notion that human societies were necessarily imperfect, and they eschewed the notion that rationalist political activity could repair their deficiencies.

Finally, the two formations agreed that piecemeal change was preferable to radical change. If the consequences of change could not be known, it followed that slow change entailed less risk and could be reversed if necessary. This is, of course, a notion that often appears in conservative discourses. But it could also be found in the writings of key socialists. Perhaps the most influential statement of post-war socialist thought, Anthony Crosland’s The Future of Socialism (1956), stated that:

The essential argument for evolutionary change is that it allows one to be experimental, since the problems involved in change then unfold themselves at a speed which gives ample time for dealing with them … One should never monkey around with society too much; if we do, we may find that history has some unpleasant surprises up its sleeve for us.

It is possible, then, to identify a degree of overlap in the epistemological views of post-war social democrats and ‘middle way’ Conservatives. And once we acknowledge this convergence, it becomes possible to reconcile some of the claims made by proponents and critics of the post-war consensus thesis. As some accounts have demonstrated, the two main parties were wedded to different objectives. While the Labour Party was committed to creating a more equal social order, their Conservative opponents were hostile to egalitarianism and were suspicious of policies that could interfere with private enterprise. But because both parties were reluctant to identify fixed objectives that they sought to realise, and because they preferred piecemeal change to radical change, their disagreements were contained within a set of ideational parameters.

Note: the above draws on the author’s published article in British Politics.

Dean Blackburn is Lecturer in Modern British History at the University of Nottingham.