Labour has gained considerably in polls in recent weeks. But do voters really change preferences during a campaign? Will Jennings and Christopher Wlezien explain the importance of using a fundamentals-based approach in predicting UK elections. They find that, despite the turnaround in fortunes in this year’s campaign, the Conservatives may still be looking at a 9-point lead.

How do voters’ preferences come into focus in between elections? Do they evolve very late, as the campaign really heats up? Or are they already in place early on, well before the official campaign even begins? We show that the latter is closer to the truth. The final vote is fairly clear in polls conducted well in advance of Election Day. These early polls also largely reflect the so-called fundamentals of elections. Late-arriving events can still matter, though mostly when elections are – or were expected to be – close, as in 2015.

The polls and the vote over the election timeline

For our analysis, we amassed over 5,094 vote intention polls for the 14 elections in the UK since 1964. (For more details, see here and here.) Figure 1 below illustrates how the Election Day vote lines up with pre-election polls for the two major parties – the Conservatives and Labour – at various points during the election cycle, beginning 200 days before each election. We start our analysis in 1964 as this is the earliest election for which we have data on income growth – which we will use later in our analysis. 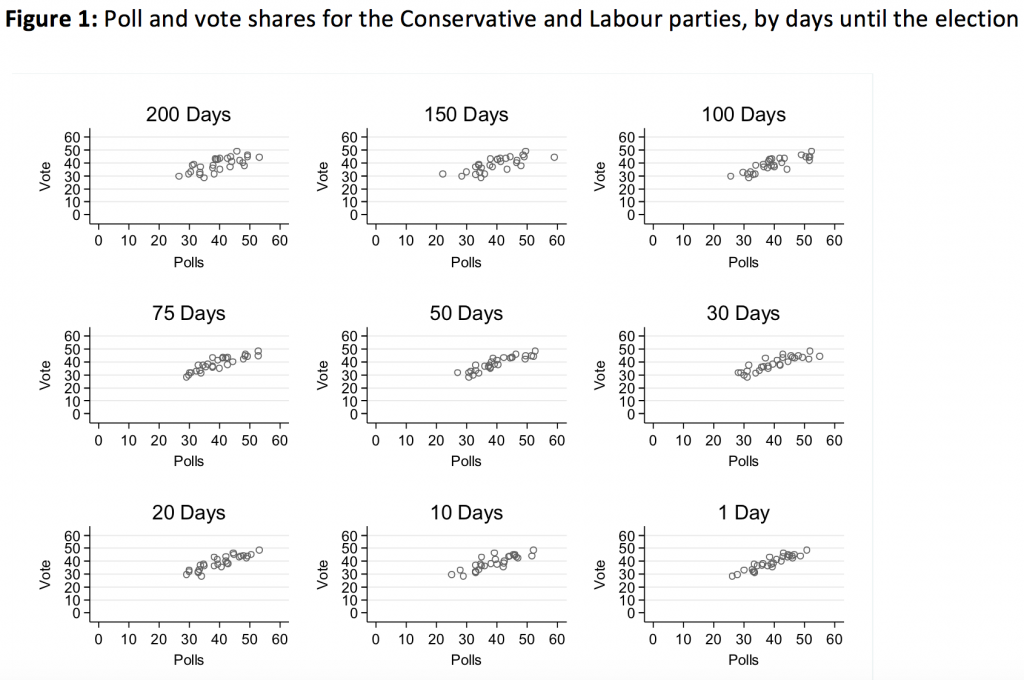 In the upper left-hand panel of the figure, using all polls available 200 days before each election, linearly interpolating missing observations, there already is a discernible correspondence with the final vote, though there also is some variation. As we turn to polls later in the election cycle, moving horizontally and then vertically through the figure, the pattern becomes clearer. That is, poll shares and vote shares line up more neatly. This is not highly surprising, but it is as one would expect if voters’ preferences change over time and a portion of that change lasts to impact the ultimate vote. But, how much do the preferences change over the campaign timeline?

To provide a more specific assessment, we calculate the mean absolute error of the polls on each day. This represents the average difference between the polls and the election result for the two parties across all 14 elections. Figure 2 plots these numbers for the final 200 days of the election timeline. 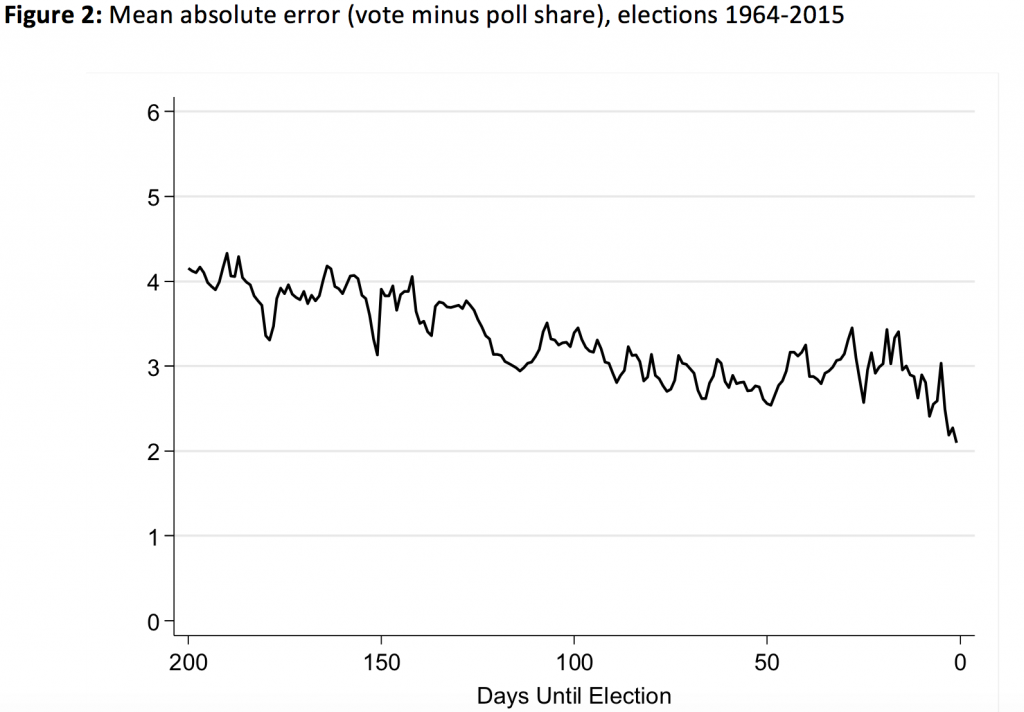 In the figure, we can see that poll errors decline over time. Some 200 days before Election Day, the mean absolute error is about 4.0 percentage points. Fifty days in advance, even before the official campaign has begun, the average error is below 3.0 points. On the eve of elections, it approaches 2.0 points. This is not surprising but it shows that polls become more reflective of the actual result, even though they remain imperfect even at the very end of the campaign.

Although the patterns in Figures 1 and 2 owe partly to the increasing number of polls and respondents as the election approaches, they also reflect change in preferences over time. Most of this change occurs over the ‘long campaign’ leading up to the official campaign that garners so much attention. (Further consider that using a date from earlier points in the timeline, the mean absolute error reaches 4.6 points 400 days in advance and 7.0 points 750 days out.) The fundamentals of elections evidently are in place well before parties and leaders take center stage.

The early structuration of voter preferences is clear from analysis including important political and economic variables. For this, we turn to leader satisfaction ratings and the growth rate of average weekly earnings – variables that have been shown to predict the final vote in other studies (for example Matt Singh’s analysis predicting the 2015 polling miss). The former is compiled from long-running Gallup and Ipsos MORI poll series, and the latter are a combination of the historic and current data series from the Office for National Statistics.

Given that improving economic conditions are expected to favour the government and, by extension, disadvantage the opposition, we invert the weekly earnings measure (i.e. simply multiply it by minus one) where a party is in opposition. Finally, our fundamentals variables are standardized so that coefficients are more directly comparable with each other and with those for the polls. Using a method pioneered for US presidential elections, we regress all the variables – polls, leader ratings and earnings growth – on the vote share for each party.

Figure 3 presents regression coefficients relating the vote, the polls, and our two fundamental variables for each day of the timeline. The results indicate how much impact each variable has on the vote. In the figure we can see that polls are the dominant predictor on each day. Leader ratings and earnings growth have positive, but weaker effects. What is most important is how the coefficients change over time. The effect of polls ebbs and flows, but only a little.

There is an increase over the final 40 days, however, and the coefficient actually approaches a perfect 1.0. During this time the effect of leader approval ratings declines. It is as if the polls increasingly absorb voters’ leader evaluations, though a small effect remains even at the very end, when the coefficient is greater than 0.0. The same is not true for economic factors, which apparently are fully reflected in voter preferences by the time the official campaign begins. 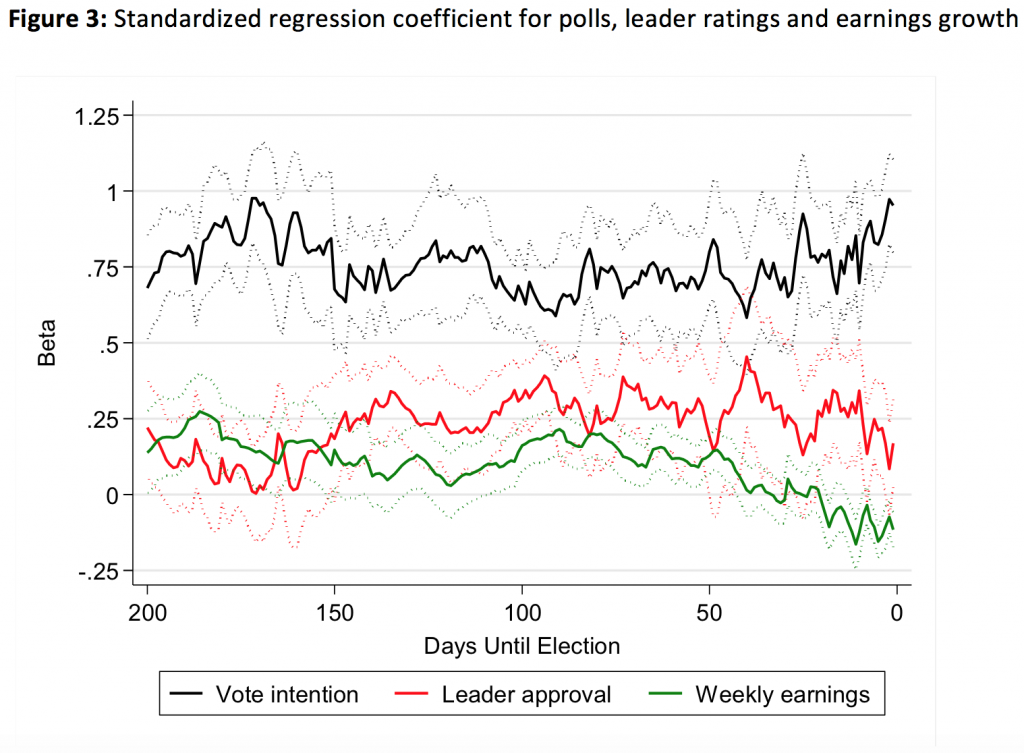 These results are relevant to the 2017 election. That is, we can plug the current information we have on polls, leader ratings, and earnings growth into our regression model at different points in time to see what level of support these would suggest on Election Day – based on the historical evidence.

In Table 1 we look at these estimates 90 days out, 30 days out, and just 7 days out. These reveal that the expected vote share of the Conservatives peaked just after the election was called, but has fallen back since. The model still suggests a substantial 43.3% of the vote on Election Day. More interestingly, Labour has gained considerably in our estimates, rising from a predicted 28.5% of the vote 90 days out to 34.7% a week before the election. Despite this considerable turnaround in fortunes, this fundamentals-based approach suggests around a 9-point lead for the Conservatives – more than sufficient to deliver a comfortable majority for Theresa May.

We know that important political and economic fundamentals – such as leader ratings and economic conditions – structure election outcomes. Our study shows that the polls increasingly reflect these fundamentals over time. Polls also pick up the effects of other factors, including the campaigns themselves. The 2017 election provides a good example of this, with the predicted vote for Labour steadily rising as it has made significant gains during the campaign. But the polling misses in the 2015 general election and the 2016 EU referendum provide important reminders that the polls still have significant limitations as predictors of election results – even as voters go to the ballot box.

Will Jennings is Professor of Political Science and Public Policy, and Director of the Centre for Citizenship, Globalisation and Governance at the University of Southampton. 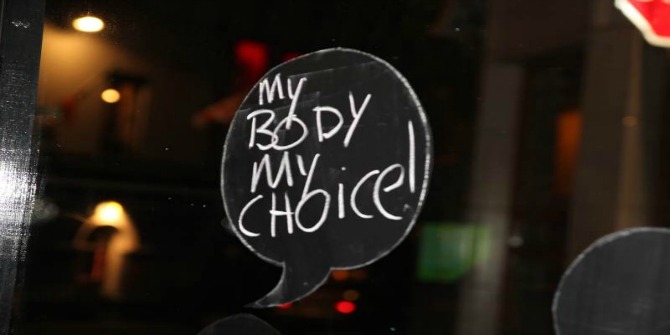