The slowdown in the economic progress of women

The slowdown in the economic progress of women

Alan Manning shows how the economic progress of women has stalled. The evidence from the gender pay gap, employment rates and attitudes all suggests we may not end up with identical labour market outcomes for men and women.

We have become accustomed to news that the gap between the economic performance of men and women is narrowing.  The headline gender pay gap tends to fall year-on-year as is shown in Figure 1. 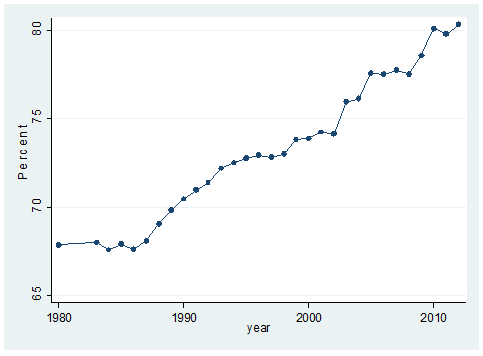 From Figure 1 one might draw the conclusion that the earnings of men and women in the UK will eventually converge though that would take some decades if one extrapolates the present pace of change.

But there is another way of looking at the data that leads to a less optimistic conclusion.  The headline gender pay gap averages across women of all ages from those just entering the labour market to those just about to retire. From one year to the next one group of sixty-something women leave the labour market to be replaced by a new set of 20-somethings. Because the labour market for women today is very different from what it was 40 years ago (when the Equal Pay Act had not yet been implemented in full) the headline gender pay gap continues to fall. But suppose we look at the way the gender pay gap varies over the life-cycle for women born at different points in time. This is shown in Figure 2.

Figure 2: The Gender Pay Gap Over the Life-Cycle for Different Birth Cohorts 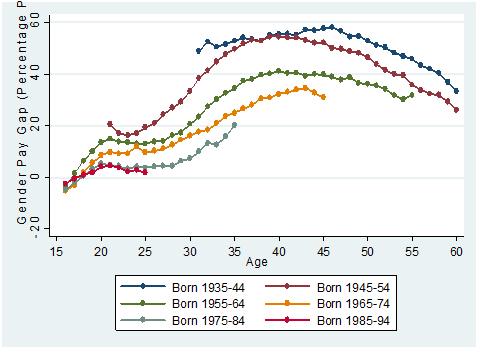 Why has the gender pay gap being stalling? One clue is to look at what has been happening to employment rates over the life-cycle as is shown in Figure 3. 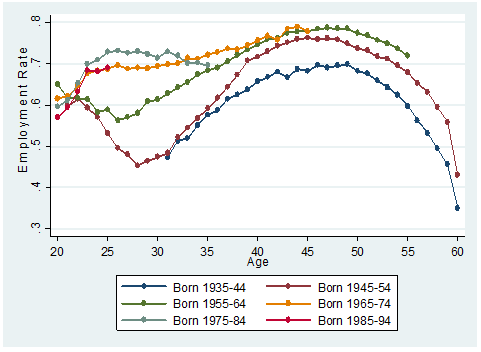 Figure 3 shows that the employment rate of women used to be much higher for each generation of women. But, again, the very latest generation of women are not working any more than those who were born a decade earlier. Actually, they are working slightly less in their early 20s but that is because more women are staying longer in education where the gap in educational attainment between women and men continues to widen.

This stagnation in the employment rates of the most recent cohorts of women is not unique to the UK – it has also occurred in the US. But, it is not entirely clear why it has happened.  One possible reason is that the big sources of gender inequality have been dealt with – the end of the marriage bar, equal pay, maternity rights, rights to flexible working – and it has become harder to come up with new policies that one would expect to make a big difference.

The main reason why the employment rate of women remains below that of men is that many mothers, especially of very young children, do not work in the labour market. Figure 4 shows that one possible reason for this is that a considerable number of women continue to believe that it is best for their pre-school children if their mother does not work.

Figure 4: Percentage Agreeing That a Pre-school child suffers if their mother works 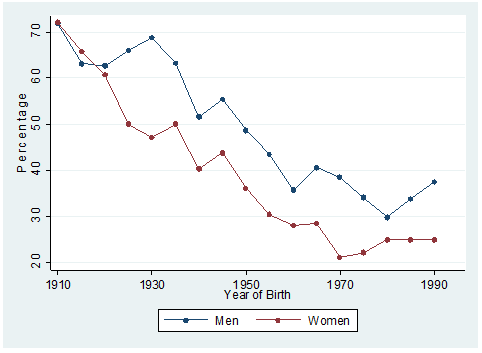 Of course, one could argue that a smaller number of women would think pre-school children suffer if their mothers work if the average father provided more support within the home and if the quality of childcare was better and its cost lower. But it is also possible that many of these women think – whether for good reason or not – that there is something unique about a ‘mother-child’ relationship for which there can only ever be imperfect substitutes.

This evidence from the gender pay gap, employment rates and attitudes all suggests we may not end up with identical labour market outcomes for men and women. It then becomes of crucial importance how the labour market rewards different types of work.  So it may be that finding some way to reverse the increase in wage inequality is the best way in the future to close the gender pay gap.

Alan Manning is Professor in the Department of Economics at the London School of Economics and director of the Labour Markets Programme at LSE’s Centre for Economic Performance.