With party conference season upon us, John Curtice looks at the latest polling data and examines the respective fortunes of the parties. For Labour, there can be little doubt that Ed Miliband’s continued failure to make a favourable impression is costing his party. For the coalition parties, polling suggests that the public have begun to become rather more optimistic about their own financial future and that of the economy in general, but it remains to be seen whether the Tories and LibDems can succeed in making electoral capital out of any economic success.

This is not a party conference season at which any of the three main parties at Westminster can enjoy in the confident expectation that they are clearly on course for victory at the next general election, now less than two years away.

Labour remain ahead in the opinion polls, as they have been – bar one brief interruption in the immediate wake of David Cameron’s decision in December 2011 to wield a European veto – ever since November 2010. However, there has been a discernible softening in the party’s position during the course of the spring and summer. The party’s poll share averaged 40% or more throughout the twelve months leading up to March this year. But since then it has consistently been below that mark. As a result the party’s lead over the Conservatives has more than halved from an average of eleven points in the three months to March to just five points during the course of the summer.

Figure 1: Party fortunes in this parliament 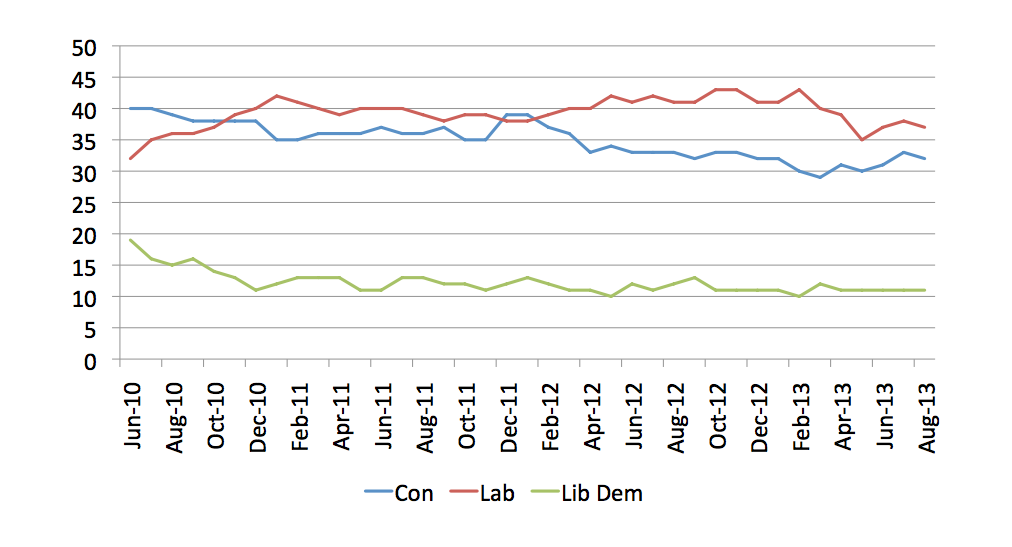 Past precedent suggests that this is well short of the kind of lead that an opposition party that is set to win an overall majority in a little under two years time should be enjoying. Hitherto, no opposition with a lead as small as five points at this stage in a (four or five year) parliament has gone on to claim the freehold of 10 Downing St. True, Harold Wilson only had a six point lead in May 1972, but he only went on to become the largest party in a hung parliament – after an election called unexpectedly early in the wake of a miners’ strike. The smallest lead to be enjoyed at this stage in a parliament by an opposition that went on to unalloyed victory was the nine point lead enjoyed in December 1962, a lead that in fact was to lengthen further the following year. 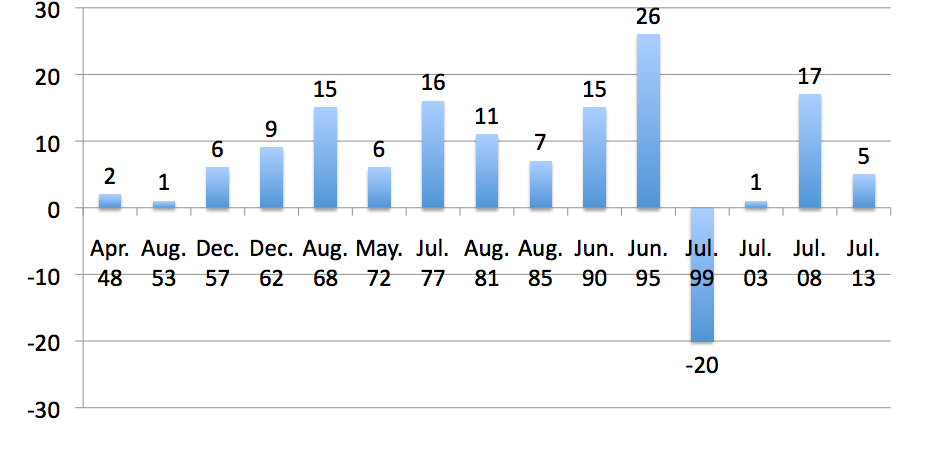 The summer decline in Labour’s rating has been accompanied by a decline in Miliband’s personal ratings. According to the most recent Ipsos-MORI poll, only 24% are now satisfied with his performance as opposition leader, the lowest reading yet. It can often be difficult to disentangle cause and effect in the relationship between a party’s overall standing and the rating of its leader, but there can be little doubt that Miliband’s continued failure to make a favourable impression on the public is more hindrance than help. Only one opposition leader who was anything like as unpopular as Miliband currently is at this stage in a parliament went to became Prime Minister – Edward Heath – and he was helped by Harold Wilson’s decision to rush to the country too quickly in June 1970, a mistake that the Fixed Terms Parliament Act effectively does not allow David Cameron to make. 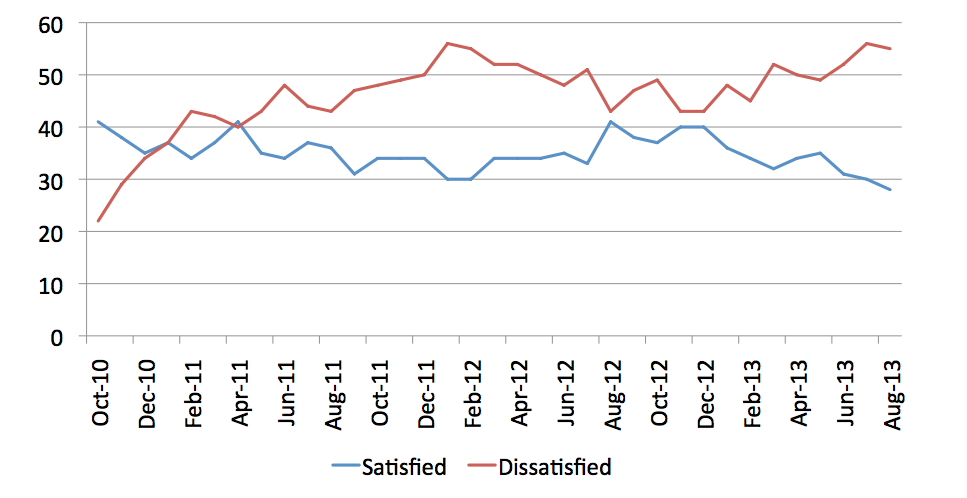 Meanwhile, we might note that one common criticism of Mr Miliband’s leadership – that he has failed to set out a sufficiently clear strategic direction for his party – receives a clear echo in a recent Ipsos MORI poll. As many as 51% agreed that they did not know what the Labour leader stood for, while only 37% disagreed – a net clarity rating of -14. This was every bit as bad as the equivalent rating for Nick Clegg, -13, whose party is one whose stance voters are often unsure about. In contrast Cameron has clarity rating of +23, while Nigel Farage, the UKIP leader manages +13.

On the other side of the despatch box there has been some encouraging news in recent weeks; on nearly every polling measure on the subject the public have begun to become rather more optimistic about their own financial future and that of the economy in general. Indeed, on some measures the public are more optimistic now than they have been at any time since the coalition first came to power. What remains to be seen, however, is whether the coalition parties can succeed in making electoral capital out of any economic success.

There certainly is no sign that economic optimism is translating into an upturn in Liberal Democrat fortunes; their average poll rating remains at around the 11 point mark it has been every since the party’s U-turn on tuition fees nearly three years ago. Indeed, with around one in three 2010 Liberal Democrat voters still inclined to vote Labour, Ed Miliband’s hopes of making it into Downing Street now look heavily reliant on the continued disenchantment of former Liberal Democrats. Without them his party’s lead would soon disappear.

Still, it perhaps comes as little surprise that a brighter economic mood has not immediately translated into better news for the junior partners in the coalition. In contrast, the senior partners, the Conservatives, probably anticipate having relatively little difficulty in claiming credit for any economic improvement. Yet they might be wise not to count their chickens. According to YouGov, public confidence in the ability of the coalition to handle the economy fell sharply in the wake of the 2012 Budget, which together with the accompanying charge of omnishambles resulted in a sudden fall in Conservative support. Although still well short of the readings in the early days of the coalition, the proportion who think that the coalition is managing the economy well has returned in recent months to the level it was before that fateful Budget. However, that has not as yet translated into commensurate electoral support; Conservative support is still some four to five points below what it was before spring 2012.

Much of the loss of Conservative support during the last 18 months has of course been the result not of people switching to Labour, but rather to UKIP. And at present the flow of votes from the Conservatives to UKIP remains just as high now as it was in the spring, immediately before UKIP’s impressive local election performance; some 14% of 2010 Conservative voters still say that they would vote UKIP now. Although many of these voters may have initially been dislodged from their Conservative perch by a loss of confidence in the party’s ability to handle the economy, the question that now arises is whether, having found a new seemingly congenial perch, they will regard a few chinks of economic light as sufficient reason to fly back again. Mr Cameron and Mr Osborne may need to dangle more than economic success before their eyes. 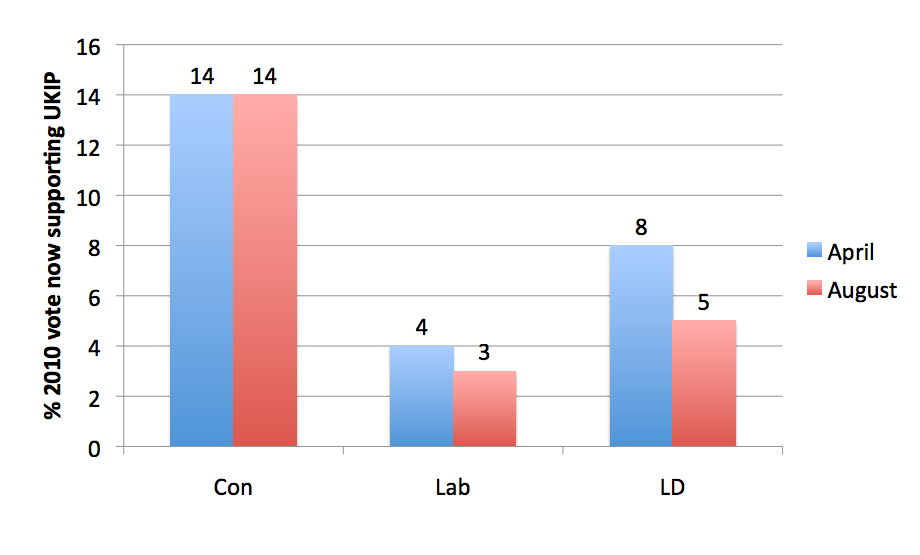 John Curtice is Professor of Politics at University of Strathclyde.