The Treasury is forecasting growth in 2013 to be only 1.4% and 2.8% in 2014. This is hardly escape velocity for a recovery as next year’s GDP prediction is barely above historical trends. Indeed, the recovery has been the weakest for over a hundred years – real national income will still be smaller than it was in 2008 (see Figure 1). Productivity is around 15% lower than we would have expected from historical trends.

Figure 1: UK Recovery this time Slower than in the Great Depression 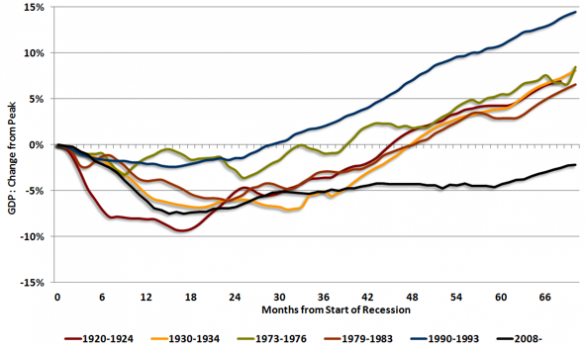 What about the fact the employment levels in the UK in 2013 are higher than in 2008, though? Doesn’t this contradict the depressing picture from GDP which is notoriously hard to measure accurately? The goods jobs picture is partly explained by population growth, the employment to population rate has fallen since the start of the recession. Nevertheless, the British flexible labour market has held up well, with unemployment peaking at 8% of the labour force, a lower level than America’s 10%, let alone the Eurozone, more than one in four are jobless in Spain. But the main reason for the good UK jobs performance is declining labour costs – real wages fell by about 8% in the four years since Lehman’s – a post-war record. Although low pay is better than no pay, declining living standards for the average worker is not something to boast about.