Since the onset of the financial crisis, the predicament facing the UK has been construed in entirely economic terms. Yet Colin Talbot argues that we are seeing a broader generalised malaise afflicting the institutions which have long been central to the public life of Britain.

“It’s the economy, stupid” (Bill Clinton’s supposed reminder to himself in the 1992 Presidential election) has become the de facto concern of the UK political elite and commentariate since the Global Financial Crisis kicked-off in 2007. In some ways this was, and still is, quite right. Certainly when we came close to financial collapse in October 2008 nothing else very much mattered. I dare anyone to read Alistair Darling’s account of that period and not come away with a very queasy feeling indeed.

Focussing on possible economic catastrophe certainly paid enormous dividends for the Coalition in the early days of the new Government. It was their entire justification for the Coalition after all. There was no alternative unless we were to follow Greece on a spiralling path to disaster.

Today the national debate still focuses on the economy, even though there is now no internal reason why we should fear imminent collapse. True, there are plenty of external reasons to make us edgy, but the worst economic scenario seems to be a prolonged period of weak growth and relative decline in the economic world pecking-order. This is of course important, and a serious reversal of fortunes for the nation and many, many, people.

But alongside the economic debate there are a series of other national crises of state and civil institutions that are mostly treated as separate issues when they should perhaps been seen together. Each individual crisis might seem serious but manageable – taken together and reinforcing one another, it might be a different story altogether.

The biggest in many ways was the crisis of Parliamentary expenses that saw the biggest turnover in elected representatives in decades, not to mention several jail sentences and a massive dip in public confidence in the political system as a whole.

Now that has been followed by crises in the (some) newspapers over criminal phone hacking, bribery of police and regulation whilst the BBC seems to have acquired a death-wish in its handling of the Saville case.

The Police have come in for unprecedented criticism over Hillsborough, phone hacking, bribery and Plebgate, and remarkably seem to be on a collision course with a Tory led government – an astounding turn of events.

The established Church is tearing itself apart over its illiberal attitudes on sex – women and gays – just as scandal after scandal about Catholic and CoE cover-ups of child sex abuse break.

The very Union, with the forthcoming referendum on Scottish independence, seems under real threat and the whole country seems to be “sleep walking towards the Euro exit”.

The attack on the Civil Service by the elected government for being “obstructive” and by Parliament for being unaccountable is challenging conventions dating back 150 years. Both the executive and Parliament seem intent on pushing through changes.

And of course last but not at all least the banks and the tax-dodging rich corporations and individuals have come in for criticism on an almost unheard of scale with hardly a week passing without some boss, bank or business being bashed from pillar to post. Even Tory ministers have been forced into radical sound-bites about their immorality and the degree of tax dodging is surely undermining ordinary taxpayers faith in the system.

Now even the weather seems to have joined in, lurching from droughts to floods in almost Biblical style.

My point is that this sort of conjunction of crises in a whole range of the crucial institutions of the ‘ancien regime’ is the sort of thing usually associated with some sort of convulsion.

In a situation where the economy is at best uncertain and the majority are suffering serious erosion of their living standards, in my old Marxist days we’d have been rubbing our hands with glee and talking about a “revolutionary conjuncture”.

Experience tells us anything quite so dramatic is unlikely to happen, but that some sort of lesser upset is entirely possible. Some institutions – like the Monarchy – even appear somewhat strengthened at the moment. And there have been moments of national collective pride and enthusiasm like the Olympics and the Jubilee. But these episodes in some ways only serve to highlight just how febrile the atmosphere is in many other areas of national life.

What is certainly the case is that we perhaps ought to be paying more attention to these multiple, overlapping, institutional crises than we are at the moment. It’s not just “the economy, stupid” – the conjunction of these crises may signal some much deeper changes in our whole edifice of governance, for better or possibly for worse. I am not saying the individual crises are being ignored – of course they are not. But the big picture does seem to be being neglected in preference to focusing on the economy whilst the individual crises are treated as isolated, episodic, and separate ‘news’ stories.

They might be more than that. If they are, how they turn out will prove important for all of us. Perhaps as important, or even more so, as how well the economy does? Recent history in Japan demonstrates that modern societies can withstand prolonged periods of stagnant economies, but some recent European history shows what can happen when state institutions collapse rather than change. And of course a sluggish economy and an institutional crisis coming together poses bigger dangers.

Some of these institutions obviously need an overhaul, and I for one won’t shed many tears over the collapse of the established church. But there’s a huge difference between a constructive overhaul and destructive overturn.

This was originally posted on Whitehall Watch.

Colin Talbot is Professor of Government and Public Administration at Manchester Business School, University of Manchester. Colin’s main area of expertise in is public services and public management reform. He has advised a wide range of international public sector organisations and/or carried out research in countries as diverse as Canada, Jamaica, Mexico, Tanzania, India, Bangladesh, Japan, Hong Kong, Malta and Sweden and spoken at conferences and seminars in over two dozen countries.

The Profumo affair 50 years on: The collapse of the old establishment has not brought enhanced democratic participation 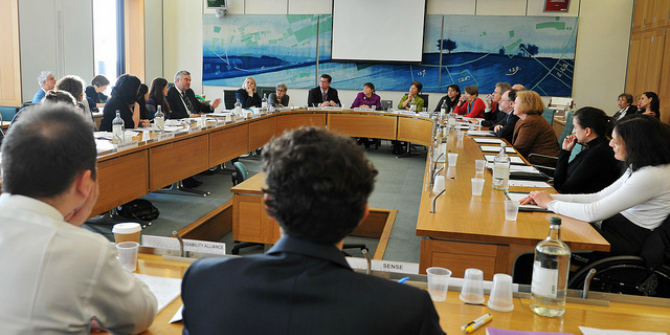 Is the coalition serious about “open-book government”? Can it really be a citizen-powered substitute for top down, central controls?