Following the election result some pundits have suggested that English votes for English laws might be an obstacle to the government, given its reliance on support from non-English MPs, whilst others have suggested the procedures might provide the government with an enhanced English majority. In this post Daniel Gover and Michael Kenny explain that neither of these possibilities is likely to occur. However, the territorial balance of the new Commons could cause the West Lothian question to come back to the fore – though not solely in relation to England.

Amidst the swirl of punditry and opinion unleashed by this month’s general election result, attention has once again turned to the ‘English votes for English laws’ reform (otherwise known as ‘EVEL’) recently introduced in the House of Commons. EVEL aimed to address concerns about the capacity of MPs from outside England to exercise a determining vote on England-only legislative matters. Some pundits have suggested that it may well represent an acute obstacle, of the Conservatives’ own making, to the prospects of Theresa May’s minority government given its reliance on support from MPs outside England. Others, by contrast, have wondered whether EVEL might give her the enhanced majority she needs to govern England. In fact, neither of these possibilities is likely to occur.

Indeed, some of the more outlandish claims in circulation about EVEL supply yet more evidence of how poorly understood this set of procedures still is. In our in-depth analysis of its first year of operation – Finding the Good in EVEL, published in November 2016 – we argued that the EVEL procedures should be simplified, made more transparent, and be better explained by government. But, although EVEL itself is unlikely to greatly hinder this minority government in parliament, some of the wider issues underpinning the ‘West Lothian Question’ (to which EVEL was a very belated answer) may well resurface, and it is worth pondering those at this particular moment.

EVEL and the West Lothian Question

The arithmetic of the new House does mean that questions of territorial representation could well become divisive and difficult for Theresa May, and these may add to the formidable set of challenges ahead of her. But to understand these, we should first remind ourselves of the iconic West Lothian Question posed by the late Tam Dalyell in response to proposals for devolution in the 1970s. Dalyell raised two distinct issues. His central complaint was that, were devolution to be implemented in only certain parts of the UK, MPs who represented seats where devolution applied could, in principle, determine outcomes for those who lived in non-devolved parts of the UK, whilst MPs representing the latter could not do the reverse. Implicit within this, however, was a second observation: that devolution might legitimise the idea that any UK administration needed a ‘mandate’ to introduce legislation for territories where it was not the majority party.

Both of these points may well become pertinent now, given the territorial arithmetic generated by the recent election. The Conservatives, who have since the 1970s become increasingly preponderant in England in terms of their parliamentary numbers, have now secured 13 seats in Scotland (a result not achieved since the 1980s). And they have at the same time gone backwards in England, suffering a net loss of 22 seats.

This result means that the party is unlikely to play the English card in quite the way that David Cameron did after the Scottish referendum of 2014. During the 2015 general election campaign, he appealed directly to English voters worried about the prospects of a Labour-led government, under the weak leadership of Ed Miliband, and the possibility that it might need to lean upon SNP support. The Tory party published an English manifesto as well as a UK one (a move which was not repeated in 2017), and included within it a commitment to introduce a new set of rules in the Commons designed to achieve ‘English Votes for English Laws’. These new EVEL procedures came into force in October 2015, and have been applied to provisions in roughly half of all subsequent government bills. 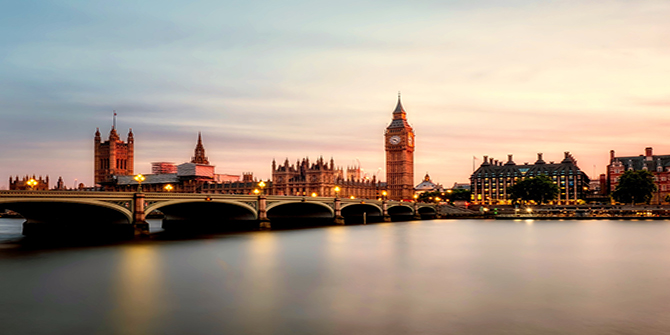 But is EVEL likely to become an obstacle to any deal with the DUP, as has been widely suggested? Or will it give the Conservatives an enhanced majority to pass English legislation? The short answer to both of these questions is ‘no’.

All primary legislation at Westminster passes through a series of stages at which MPs from across the UK may vote – and this remains the case under the EVEL procedures. What is novel as a result of EVEL is the requirement for the Commons Speaker to ‘certify’ provisions of any government bill that meet particular tests of applying only to England (or England and Wales). Certified provisions must, in addition to passing the UK-wide stages, also be approved by a ‘legislative grand committee’ comprising MPs from England (or England and Wales), which meets towards the end of the bill’s Commons passage (for a full explanation of these processes see our recent report). This means that MPs from England (or England and Wales) can exercise a veto over certified parts of a bill. But the entire House also retains a right of veto, since it may vote at most of the other stages of a bill’s Commons passage (including at the final ‘third reading’). In other words, to pass certified (parts of) legislation, the support of MPs from across the UK remains necessary, but it is no longer sufficient.

What then is the effect of this month’s election outcome on this system? Firstly, it reduces the majority of the Tory party both in England, and also in England and Wales combined, but not by a huge margin. In England there are now 296 Conservative MPs, compared to 236 for all other parties combined – which means a Conservative majority of 61 (excluding the Speaker and his deputies, and assuming they all represent English seats). In England and Wales combined, the Conservatives have an effective majority of 37. While no government would take for granted majorities of this size, they are nevertheless comparatively comfortable. Of far greater concern to Theresa May will be her government’s position across the UK as a whole – given that, under EVEL, it remains necessary for England-only legislation to be approved by UK-wide MPs. Even with the support of the DUP, the government’s effective Commons majority stands at 13; without the DUP it has no majority at all. In this situation, the new government will be worrying far more about its thin (non-)majority across the whole House than it will about its lead among English representatives.

It is possible that EVEL will surface in the politics of the coming period – though not as an obstacle to a deal with the DUP (although they, like all the other non-English parties at Westminster, are not keen on these new procedures). Situations could arise where the government would like to pass legislation, parts of which apply only to England or England and Wales, but cannot do so because MPs from across the House (including some Conservative rebels) oppose it. This was exactly the situation which arose in the last parliament and resulted in the government’s defeat on planned changes to legislation regarding Sunday trading in England and Wales. If this kind of eventuality arose again, the call for a more robust form of EVEL – for example by eliminating entirely any influence by non-English MPs on England-only legislation – may well gather momentum. In such a scenario, it is the limits of EVEL, not its capacity to represent an obstacle to an arrangement with the DUP, that will become an issue.

The West Lothian question – but not as we know it

But the territorial balance of the new Commons does in fact raise the prospect that the concerns raised by Dalyell may come back to the fore – though not solely in relation to England.

One particularly interesting potential scenario concerns policy matters that apply only to Great Britain (i.e. England, Scotland and Wales), where equivalent provision is transferred to Northern Ireland – for example, subsidies for renewable energy, employment law, and social security. On such issues, Westminster usually legislates only for Great Britain (e.g. see the recent Trade Union Bill and the Pension Schemes Bill), although on some policy areas Northern Ireland routinely seeks ‘parity’ in its own policy. Across Great Britain, the Conservatives have a slender Commons majority of just four, which could be wiped out by the tiniest of backbench rebellions. EVEL was developed principally to respond to concerns about the influence of Scottish MPs on England-only legislation – but no equivalent protection has been given to English, Scottish and Welsh MPs to veto legislation applying only to Great Britain. Were the Conservatives to rely on Northern Irish MPs to help them pass such legislation, it would surely spark accusations of hypocrisy. Given how strongly many Conservative MPs feel about the principle that lies behind EVEL, it will be interesting to see whether they feel similarly were the same issue to arise on a ‘Great British’ basis.

It may well be that issues of this kind are not frequent in the near future. What is much more likely to happen is that the political, rather than legal, problems associated with the notion of the ‘mandate’ of the UK government, to which Dalyell drew attention, will surface at some point soon. The question of the UK government’s legitimacy in Scotland and Wales was a key catalyst for the introduction of devolution. And while the establishment of devolved government in both these territories has gone some way to dissipating this problem, it has certainly not gone away completely. In constitutional terms, the UK parliament undoubtedly has the right to legislate in areas that are ‘reserved’ (i.e. which fall outside the devolution agreements for Scotland, Wales and Northern Ireland). But there is now a potentially high political cost for bringing in unpopular legislation to bear upon territories where a weak UK government does not have a majority, and where it may soon be fighting another election. And this may well become an issue that is voiced in Wales, as well as Scotland, in the months to come.

There is an important territorial dimension to the challenges facing the new government in the Commons, which goes beyond the important question of what effect an arrangement with the DUP will have on the Northern Irish peace process (itself a vital question). The election result looks at first blush like it may have assuaged some of the most immediate pressures upon the union, notably in Scotland. But it may well be that different kinds of territorial anomaly and disagreement open up beneath Theresa May’s feet in the weeks and months to come.

Note: the above was originally published on The Constitution Unit blog and is reposted here with permission.

Daniel Gover is a Research Fellow at the Mile End Institute, Queen Mary University of London.

Michael Kenny is Professor of Public Policy at the University of Cambridge and a Constitution Unit Fellow.