The post-Brexit Trade and Cooperation Agreement (TCA) between the UK and the EU is nominally a free trade agreement for goods. Bob Hancké, Laurenz Mathei and Artus Galiay examine in more detail what the agreement does and does not mean for trade. They explain why it falls some way short of establishing ‘free trade’.

Five years ago, the UK voted to leave the EU. After four years of complicated negotiations, and three Prime Ministers later, the UK and the EU concluded the Trade and Cooperation Agreement (or TCA, also known as the post-Brexit Treaty) in December 2020. The TCA was heralded as a free trade agreement with the best possible positive effects for British industry in general and exporting companies in particular.

Since June 2016, however, the wider economic background to Brexit and the economic losses that followed in its wake have changed significantly. The transition towards a green economy (with significant structural changes in innovation, industry, and markets) and the COVID-19 crisis (a large, but hopefully temporary supply and demand shock) have shifted the goal posts for all developed economies.

While economies everywhere face adjustment problems, Brexit has made life for UK businesses structurally harder and disproportionately more so than for companies in the EU. The reason is that the TCA did not, in fact, produce a flat free trade area, but a very bumpy one at best. A simple list, as in the table below, of the key areas where Brexit has changed things helps understand the nature and extent of the problem.

Table: Impact of the Trade and Cooperation Agreement on exporters 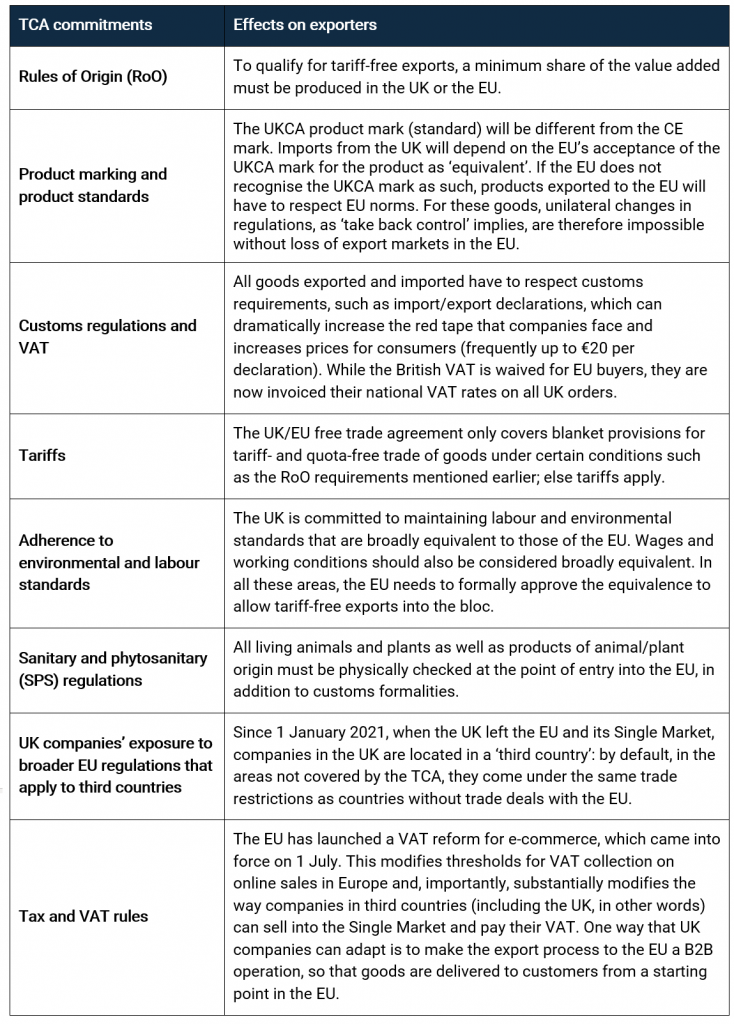 Any market needs basic rules to trade, such as who owns what; what can be traded; and how, where and with whom you can trade. Naturally, the provisions in the TCA are symmetric in the sense that they apply equally to all signatories. However, one key point, often ignored in the official British reading of the TCA, is that the same rules may have very different effects on different parties.

The reason is painstakingly simple: the UK is proportionately a much smaller market for the EU than the other way around. Almost 50% of all UK exported goods in 2019 went to the EU, while the UK made up only 6% of all EU manufacturing exports that year. Even though some sectors and regions in the EU are more exposed than others, because of these relative weights the same rules have quantitatively different aggregate effects. Put differently, the asymmetry in effects was, as it were, built into the TCA itself.

In part this also reflects the uneven distribution of power in the negotiations. The TCA between the UK and the EU, concluded in late-2020, was never meant to be ‘fair’ in the conventional sense of the word. Instead, it pitted one significantly smaller player against the largest single market (with free trade within it) in the world.

Dual shock I: Rules of origin and the green economy

But requirements associated with rules of origin (RoO) – a major part of the TCA – make the effect even more lopsided. A UK company exporting to Germany is subject to RoO thresholds; a French company doing the same is not. The French company could, therefore, import cheap parts, ingredients and textiles from across the globe, assemble or mix the final product and sell it on as an EU product (subject to some basic safety standards). The British company needs to make their product with a higher share of locally-sourced, and thus, all things being equal, more expensive components.

The automotive industry’s green transition is an interesting example of how Brexit has made adjustment to an already hefty challenge even more complex. In line with other very ambitious governments, Boris Johnson has recently announced that the UK will ban the sale of new petrol and diesel cars from 2030 onwards. While necessary from a macro political-economic view, it does imply that products, production and services have to be rethought – often from the ground up.

Electric vehicle (EV) production is a case in point. The planned widespread introduction of EVs over the next decade will require massive investments in the existing UK plants to reorient production from internal combustion engines to vehicles propelled by electricity. Very few parts are the same or at least very similar, while new parts such as batteries require local state of the art production facilities. The latter is particularly important: without a functioning battery supply chain, EV production won’t take off in the UK, potentially leading to a demise of the industry and a loss of more than 100,000 jobs.

To make matters worse, the TCA’s RoO requirements put a due date on the establishment of this new supply chain. From 2027, 55% of the final value of a car must be ‘originating’ components (i.e., produced in the UK or EU) for exports of domestically produced cars (i.e., those made in the EU or the UK). If either do not meet that requirement, exported cars face a 10% tariff. More than 80% of all UK-made vehicles are exported, and since more than half of exported UK cars go to the EU, the cost of RoO will disproportionately be felt in the UK.

Batteries, which can make up more than 50% of the value of a car, are currently mainly produced in Asia. Cars built in the UK with batteries produced in China or South Korea thus fall foul of the RoO requirements in the TCA. So, how likely is it that the UK will succeed in establishing a large enough domestic battery supply chain before the TCA due date?

The Japanese carmaker Nissan has recently announced its plan to increase its battery production in Sunderland to potentially 6-9 GWh and the UK government is in talks with large manufacturers (including Ford, Samsung and LG Chem) about building battery ‘gigafactories’ in the UK. However, it is unclear if talks are progressing quickly enough to meet the 2027 deadline (such factories take years to build and reach operating capacity, even after a speedy approval process). In addition, a recent report warns that the planned annual battery production capacity of 45 GWh from 2030 is almost 100 GWh short of the forecasted demand in 2040 (140 GWh).

For a long time, the UK has been Europe’s poster child in the services sectors. In 2019, services accounted for 80% of the total UK economic output (in Gross Value Added) and around 30 million jobs. This includes a wide array of sectors including finance, legal and business services, transport, information and communication technology (ICT), medical and social care, creative, hospitality, environmental, and other non-tradeable services. But services are also crucial for the UK’s trade balance. In 2018, services accounted for 46% of all UK exports, (40% of which went to EU member states) but only for 34% in France and a mere 17% in Germany. Additionally, while the UK had a trade deficit in goods, it ran a substantial surplus of £28bn (€32) in services.

While the financial services sector is likely to lose business to other global financial centres because of the limited financial equivalence granted by the EU, Brexit will hit many other service suppliers once the COVID-19 travel restrictions are lifted (on top of other non-tariff trade barriers such as mutual recognition of qualifications that will come into play). While business travel and, therefore, physical service provision in the EU was impossible during the pandemic, the lack of services commitments in the TCA will ground many previously successful British services exporters also in the future.

The main reason for this is the arduous new visa and work permit requirements for UK business visitors when providing a paid service in the EU. A band of five musicians on a tour through six EU countries, for instance, will likely need to fill in up to 60 individual forms (5 people X 6 countries X 2 forms, for visas and work permits) and often deal with multiple national authorities with varying abilities of swift application processing.

TCA governance and the way ahead

The complicated and last-minute negotiations of the TCA means that both parties have ample flexibility to amend the new rulebook gradually. The TCA foresees 19 specialised committees – sitting under a ministerial level joint partnership council – which cover almost every aspect of the agreement and can suggest (marginal) changes to the deal. Conceivable ‘upgrades’ in the future could include a formalised arrangement of the mutual recognition of professional qualifications or (parts of) the border check requirements.

However, such progress will require significant changes in the political attitude on both sides, and, as the Centre for European Reform warns, the flexibility of the TCA could also leave it falling apart slowly. Not only can both parties terminate the agreement unilaterally following a 12-month notice period, but breaches of TCA commitments could negatively influence trade and investment flows between the UK and the EU. A unilateral reintroduction of EU tariffs on British exports as punishment for UK divergence in labour or environmental standards is just the most prominent example among many.

Given the current state of mistrust between the UK and EU, not to mention the evident lack of political will on either side of the Channel, British exporters cannot take anything for granted, even if they reshuffle their processes to fully adhere to the new rules. Which brings us full circle – or in the words made famous by the lead Brexit negotiators: ‘Nothing is agreed until everything is agreed’. 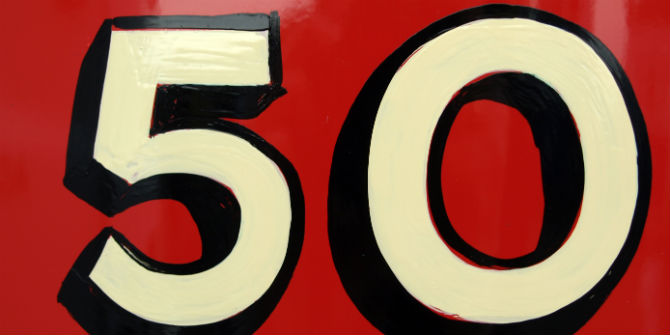 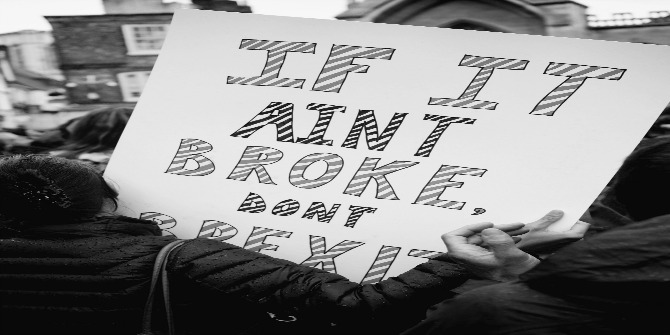